Recently, a new report “The Obama Administration and the Press – Leak investigation and surveillance in post-9/11 America” released by Committee to Protect Journalists (CPJ) believed that the Obama administration pays more attention to controlling information, convicting leaking classified information and giving more pressure on media and information providers. Experts pointed out that the report exposed the hypocrisy of “press freedom” of U.S. government.

The CPJ is an organization that focuses on overseas press freedom situation. However, considering Washington leaked out unprecedented amount of inside news and stolen journalists’ information on an unprecedented scale since Obama took the presidency, the organization made the evaluation for the first time in history. News said that the government made an extensive leak investigation, secretly subpoenaed and seized records for telephone lines and switchboards used by more than 100 AP reporters in its Washington bureau and elsewhere. Michael Oreskes, a senior managing editor of the Associated Press said that “The Obama administration has been extremely controlling and extremely resistant to journalistic intervention.”

Shi Yinhong, a professor of International Relations and Director of Centre for American Studies at Renmin University of China said, the White House used a more private and diversified way to manage media. For example, the government secretly monitors media and journalists’ activities, hits information providers, directly interferes withmedia activitives in the name of “national interest””military intelligence”, and even spreads fake news and controls public opinion. “The U.S. government makes smart and ruthless limitsto press freedom, we could suppose reasonably from the report that what we do know is just the tip of the iceberg” Shi Yinghong said.

“The White House controlling information illegally is no surprise to me.” Zhao Kejin, Associate Professor of Tsinghua University’s Institute of International Studies, pointed out that “sacred rules of the Constitution of the United States and actual policies are different.” According to Zhao, the White House and departments have special institutes and staffs to deal with media. For themselves, exposures are just the result of crisis management failure and many inside stories are solved in the name of “media public relations”.

“America always praises itself as a country of press freedom and uses the so-called press freedom to criticize press system of other countries.”

Shen Dingli, a professor of Fudan University’s Institute of International Studies, believed that absolute press freedom doesn't exist in the United States, but it is ridiculous that the US government always points a finger at other nations.

[Prev]China's economy will have a very good prospect
[Next]GMW interview: China-ASEAN community of common destiny: an acknowledgement above specific interests

Libellous and abusive comments are not allowed. Please abide by related laws.

Mo Shunhai, 59 years old, and Zhou Qunxing, a year younger, have been married for 34 years. Though Zhou is younger, she looks hoary-haired and morbid. Twenty-six years ago, she got systemic muscular atrophy. Till now, she has completely lost the capacity to take care of herself. Mo has never thought of forsaking her, but looks after her as carefully as possible. For years, he has held her hands tightly.

Recently, a candidate from Super Speaker, a renowned variety TV show, hits the Internet. She is An’ran, whose photos on Weibo are now popular for her pure and pretty appearance. She is now known as the best-looking “bald” beauty. Due to familial inheritance, she was diagnosed to be innately bald in her childhood. She has recorded for a number of hot shows, such as Extraordinary Dance, More Than Perfect, Wonderful Chinese, which build her fame among audience.

Fishing used to be a way to make a living, whereas it has become a kind of rite now. Yang Bin, who has been a fisherman for over 40 years, sees his identity change from a full-time fisherman to a part-time, the fish-catching method transformation from man-power to motor vessel then back to manpower sailing ship, the fishing period adjustment from the whole year to a month.

Deng Ziqi, the first Chinese star to be sent to space, is in the training period in Amsterdam at present. She posted photos of herself in space suits and with a Chinese flag.

The recent Fashion Week has brought the topic, who is the “Chinese Icon”, to the public debate. Many bloggrs think that there is no real fashion icon in China, as artists usually gain their fame in showbiz first and in the fashion circle later. But…she is exceptional, who is crowned to be the “First IT GIRL in China” and “Fashion Bishop in China”.

In Xinye, Henan, which is famous for monkey tricks, this tradition is waning. Performances like this are marginalized by the urbanization and modern civilization. This photo series tells the story of performers and their monkeys.

Learning 3D photography by himself in his 80s, insisting on wandering by to take photos, taking 3D photos of over 100 scenic spots in Qingdao, having photo materials of seven computer hard disks, these are what he did. Liu Boyuan, a retired teacher in Qingdao is definitely a photography lover. At present, he is producing a 3D photograph album themed “A journey to Qingdao”.

Hou Wei is a prison guard in northeast China's Changchun City. He joined a fight club and learned free combat together with many young men in 2013.He practiced this not only to build up body but also to solve some emergencies at work.  Kung fu fan Hou Wei.

·We are seriously joking: New common topic for Xi & Obama besides state affairs

·We are seriously joking: Xi Factor has come

·We are seriously joking: What kind of wine will Xi & Obama drink at the banquet? XO is the best choice, I think.

·We are seriously joking: Football fans, do you know Xi & Nedved met each other before?

·Do you know what "Wuzhen" stands for ?

·Which leader would stay at home and watch teenagers going to the front?

·We are seriously joking: In Downton Abbey, Violet, Mary, Edith and Sybil are talking about Xi’s visit

·Are those Republican guys annoying you, Mr. Obama?

·We are seriously joking: Abe will not come to China to attend V-Day parade

·My dog seems a little confused about my ringtones...

As the lowest temperature in China's northernmost city Mohe in Heilongjiang province has dropped to -30 C, Lianhua Lake has frozen and created spectacular scenes of ice bubbles.

Tuole village in Panzhou county, Southwest China's Guizhou province, is said to be home to the best-preserved ancient ginkgo trees with the world's highest growth density. The oldest tree is about 1,500 years old.
Latest News 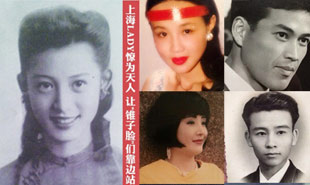