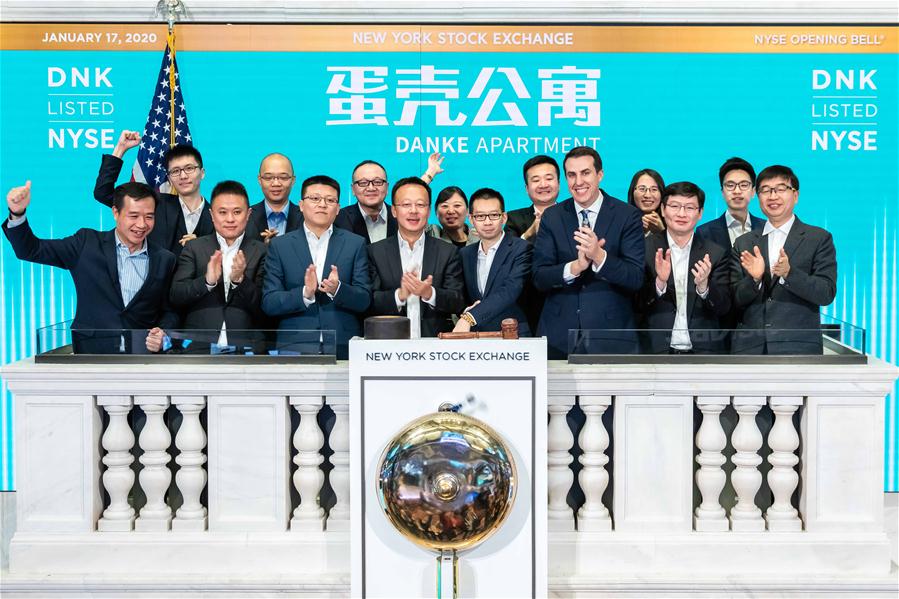 The company, trading under the ticker symbol of "DNK," announced its IPO of 9.6 million American depositary shares (ADSs), each representing 10 Class A ordinary shares of the company, at a price to the public of 13.5 U.S. dollars per ADS.

Citi, Credit Suisse and J.P. Morgan acted as lead managers on the deal.

The stock started trading at 13.50 dollars per share on Friday, and declined 3.56 percent from its pricing to trade at 13.02 dollars apiece around midday.

The firm, operating under the name of Danke Apartment, was founded in 2015. The Beijing-based company, which had established operations in 13 cities across China as of Sept. 30, 2019, is one of the largest co-living platforms in the country with rapid growth, said its prospectus, citing consulting firm iResearch.

Calling the company's debut on the U.S. exchanges "a milestone," Gao also expects the move would help the company's brand building and attract more talents.

China's residential rental market is expected to grow to 3.0 trillion yuan (or about 437 billion U.S. dollars) by 2023 from 1.8 trillion yuan in 2018, according to iResearch.

The number of Chinese firms listed on the U.S. exchanges has increased in recent years. As of Thursday, the S&P U.S. Listed China 50 index, which is designed to track the performance of the 50 largest Chinese companies listed on U.S. exchanges by total market cap, stood at 3,429.36, marking an 8.28-percent gain for year-to-date returns.