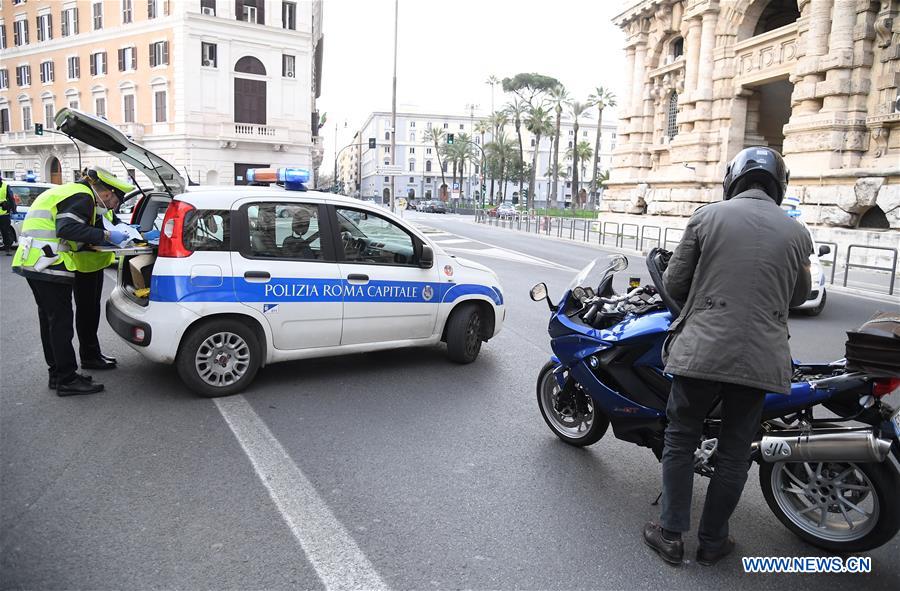 Policemen check a motorcyclist in Rome, Italy, March 22, 2020. The coronavirus epidemic continued to spread in locked-down Italy on Sunday with total cumulative number of infected cases reaching 59,138 and deaths reaching 5,476, according to the latest data released by the Civil Protection Department. (Photo by Elisa Lingria/Xinhua)

BRUSSELS, March 22 (Xinhua) -- With surging confirmed COVID-19 cases, European nations adopted a raft of further measures on Sunday to peg back the contagion, as German Chancellor Angela Merkel has put herself in quarantine after a doctor she met Friday tested positive.

Italy, which has been hit hardest by the epidemic in Europe, saw no abating sign in the spread of the novel coronavirus on Sunday. The sum of infections, deaths and recoveries now stands at 59,138, up from 53,578 of Saturday, according to the Health Ministry. The authorities also confirmed that 12 Civil Protection staff members have tested positive.

Meanwhile, France has seen its first coronavirus death of health staff. A doctor from Compiegne hospital in l'Oise, one of the worst affected regions in the country, died of infection on Saturday, said Director General of Health Jerome Salomon. France has confirmed 16,018 coronavirus infection cases, 35 percent of whom are aged under 65.

In Spain, the number of confirmed cases rose to 28,572 on Sunday, and 1,720 people have lost their lives to the disease. The Czech Republic, North Macedonia and Romania recorded their first deaths from the COVID-19 on the same day.

Also on Sunday, German Chancellor Angela Merkel decided to immediately quarantine herself at home and take tests over the next few days after she was informed that the doctor who gave her a pneumococcal vaccination was diagnosed with COVID-19.

Before being informed of the confirmed case, Merkel told a press conference that Germany will prohibit public gatherings of more than two, but relatives who live in their own household are exempt from the ban.

German citizens are advised to reduce contacts with other people outside their own household to the least, and a minimum distance of 1.5 meters must be kept, preferably two meters.

Celebration gatherings in public places, at home and in private institutions are unacceptable, considering the current serious situation, Merkel said, adding that violations of the contact restriction will be sanctioned.

The restriction measures will be in effect for at least two weeks, showing "care for the elderly and ill people, " "in brief, save lives, " Merkel said.

In Spain, Prime Minister Pedro Sanchez said on Sunday that his government was seeking to extend the current state of emergency, which was declared on March 14, for another 15 days after the end of the initial period.

In Greece, Prime Minister Kyriakos Mitsotakis announced in an address broadcast live on public broadcaster ERT a nationwide lockdown as part of measures to contain the further spread of the novel coronavirus.

The measure takes effect from Monday 6:00 a.m. local time, he said. All unnecessary movement of people is prohibited.

"It must be taken on time, so it is not taken in vain... We need bold and timely initiatives," Mitsotakis stated.

In Denmark, the authorities have acknowledged that the exact number of infections may be much higher in society since only those with clear symptoms have been tested. The Health Ministry announced an expansion of its COVID-19 testing strategy.

"We are working hard to increase test capacity with both private and public parties, and I want to work with the regions to execute this offensive testing strategy across the country," said Minister for Health and Elderly Affairs Magnus Heunicke in a press release.

Serbian Prime Minister Ana Brnabic said on Sunday that Chinese medical experts are "the most valuable resource in the fight against the spread of the coronavirus infection."

Brnabic made the remark while meeting with the six Chinese medical experts along with Minister of Health Zlatibor Loncar and Chinese Ambassador to Serbia Chen Bo.

Noting that the novel coronavirus is still under-explored, Brnabic said Serbia put its biggest hopes in the Chinese expertise.

"The People's Republic of China is a country that has remarkably confronted the COVID-19 virus and we are extremely happy to have you here with us. There are currently no people in the world who know more about this infectious disease and whose experiences would be more useful to us who are currently fighting the battle with the coronavirus. Thank you very much once again for being with us," said Brnabic, according to a release from the government's press office.

Meanwhile in Cyprus, Chinese Ambassador to the country Huang Xingyuan said a batch of medical supplies is en route to Cyprus from China.

"We are keeping close track of the first dispatch of med supplies already on their way from China to Cyprus. May they arrive in time to aid Cyprus' combat against COVID-19 at this critical point," the ambassador tweeted.