China has extended a helping hand to many countries in need in the global fight against the COVID-19 pandemic, putting into practice how a world community works towards a shared future, especially in achieving common health for mankind.

BEIJING, March 23 (Xinhua) -- At the Phnom Penh international airport on Monday, a seven-member expert team from China, carrying with them tons of medical supplies, were warmly greeted by Cambodian top officials as well as people waving the flags of the two countries.

The medical team added to China's recent medical support to countries in need -- such as Iran, Serbia and Italy -- in the global fight against the COVID-19 pandemic. 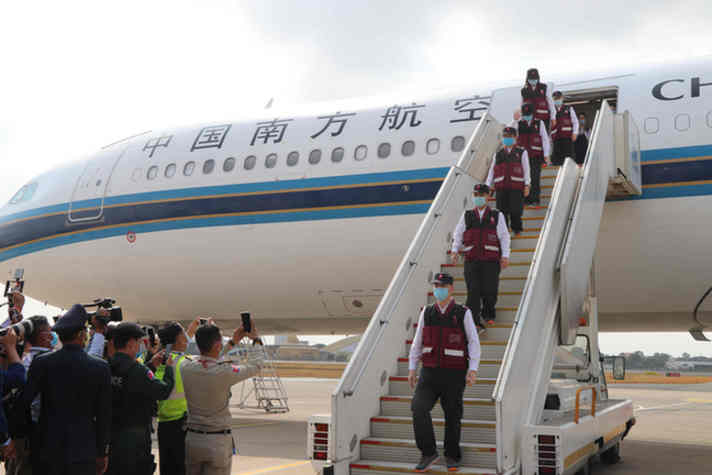 In the port city of Padova in northern Italy, a Chinese medical squad of nine people, wearing masks as well as vests in red and white with Red Cross logo, were working to an extremely tight schedule to grasp the situation there and offer medical guidance.

Their work was recorded in vlogs and diaries of Grandesso Federico, an Italian national residing in Padova.

"The Chinese team's visit to Italy is not only important from the scientific side, but also from the human point of view: to be allied against this major illness is to be allied against a major enemy of the mankind," Giampiero Rupolo, president of the Italian Red Cross Padova Committee, told Federico in a vlog.

The Chinese medical team first arrived in Rome, the first leg of their journey in Italy. After staying in Padova, it continued the northward journey to the hardest-hit region of Lombardy, where more doctors sent by China joined the battle against the COVID-19 epidemic.

Yang Huichuan, a team member, was impressed with a note in his hotel room on his first night in Rome. "We stand together, we fight together, we will win together," it read. 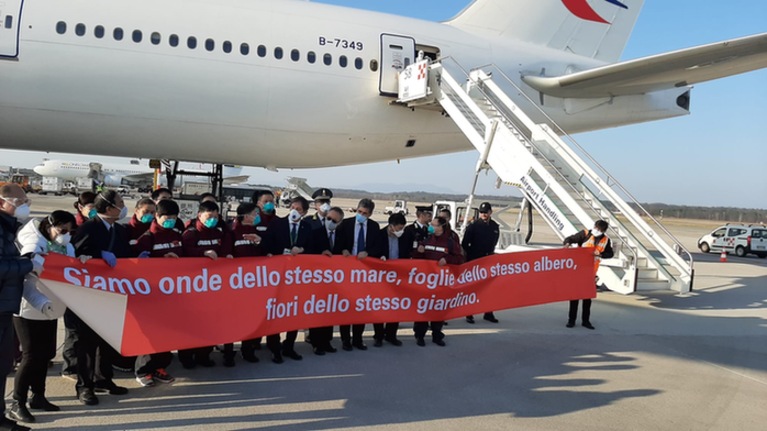 Members of the second batch of the Chinese medical team along with local people hold a banner reading "We are waves of the same sea, leaves of the same tree, flowers of the same garden" and pose for a group photo after they arrived at Milan Malpensa Airport in Milan, Italy, March 18, 2020. (Xinhua)

On March 12, the team, organized by the National Health Commission and the Red Cross Society of China, came in the nick of time with tons of medical supplies including ventilators, monitors and defibrillators.

Right on the next day, the World Health Organization (WHO) announced that Europe had become the epicenter of a coronavirus pandemic with Italy being the hardest-hit country in the region.

Upon the team's arrival in Italy, China had come out of the most arduous stage with daily new confirmed cases on the Chinese mainland dropping to a single digit for the first time. Beijing, in the spirit of solidarity and common health, has since sent more medical staff and supplies to other countries struggling to contain the epidemic.

The Chinese medical staff started their daily routines with an internal meeting at 7 a.m., and held a meeting until around 10 p.m. after returning to hotel earlier in the evening. They shared with Italian colleagues the sixth version of China's COVID-19 treatment guidelines and the seventh version of its diagnosis and treatment scheme.

"The Italian side asked us a lot of questions, and we often had longer discussions than we initially planned," Yang said. "We want to share the achievements we have made, and lessons we have learned, to help Italy better deal with the situation." 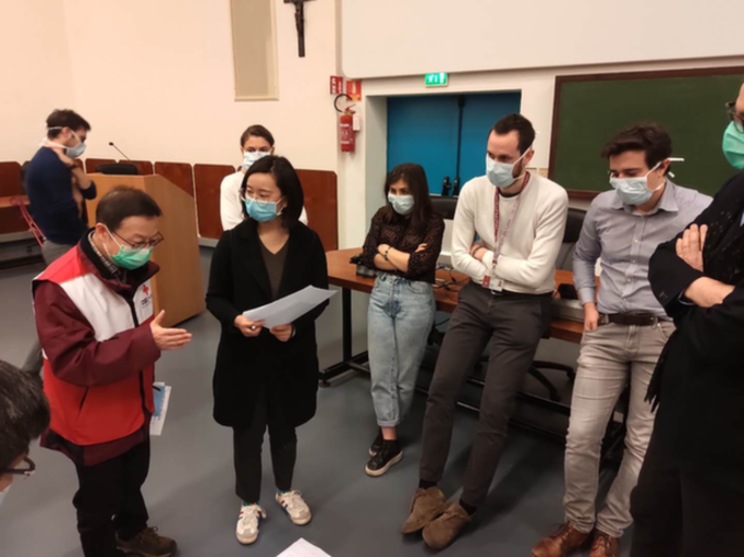 The team also spent time "strengthening people's confidence in home quarantine." Days later when they passed through the usually bustling areas in Rome, they seldom saw any pedestrians and vehicles.

They also taught the public via a live-stream how to better protect themselves, including the seven-step hand-washing method. "It's the simplest thing, but a key way to guard against the virus," said Tang Menglin, a head nurse from China's Sichuan Province, whose special affection for Italian doctors dating back to 12 years ago brought her to the frontline in Italy.

"As a Sichuanese, I'm fortunate to be here to repay Italians' kindness when we were in trouble," said Tang.

The story began in May 2008, when Sichuan suffered a catastrophic 8-magnitude earthquake, in which more than 80,000 people were killed.

Within days, a medical team of about 20 members from Italy was on the ground in Mianzhu, Sichuan. They established a tent-like field hospital with complete sets of medical equipment, capable of conducting sophisticated surgeries and telemedicine. 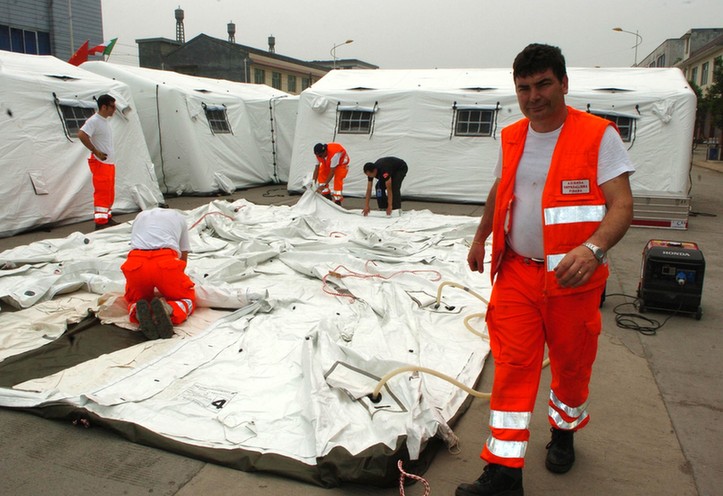 Emotional connection with "kind and generous" local people left on team members an indelible impression. "They (locals) were moved that we would leave our families behind to go to their city to help them," said Maria Carola Martino, an emergency room surgeon.

To cheer children up from the trauma, the medical team held a jamboree, with some singing songs and one member riding on a broomstick to imitate Harry Potter in a hilarious way.

Zuo Xuemei, a local Chinese doctor, recalled a surgery in which she assisted the Italians. "It was very hot in June and everyone was sweating ... We spoke different languages, but communicated through eye contact as everyone was familiar with the surgery procedure."

The Italian doctors treated nearly 1,000 people before heading home, and left the field hospital to local doctors. Residents gathered to see them off and some children cried and followed their cars as they drove away. 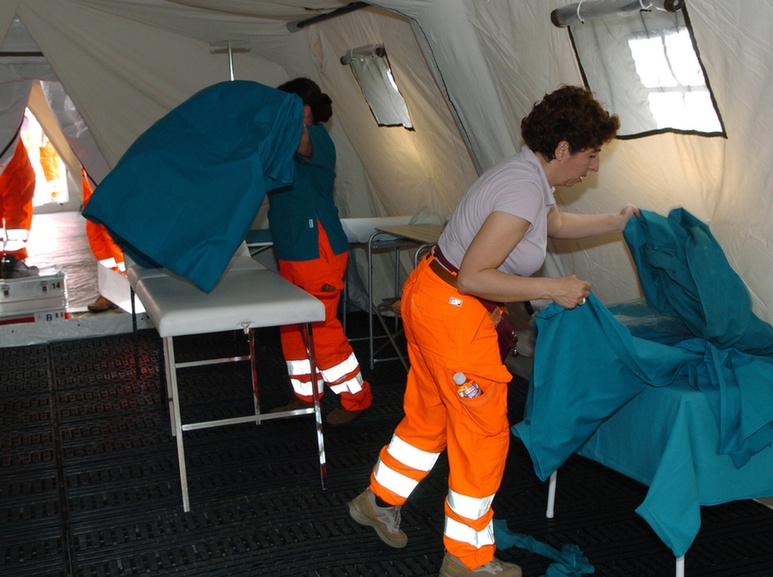 Now China is offering a helping hand to Italy in the heart-wrenching pandemic.

Luigi D'Angelo, director of the Emergency Office of Italy's Civil Protection Department, was in Sichuan to coordinate the support of European experts.

Being engaged in the emergency management due to the coronavirus in Italy and once again working with Chinese doctors, D'Angelo said the concept of "world community" is what they are looking at.

The bond between Beijing and Rome tells how a world community stands together through thick and thin, and the notion resonated with faculty staff and students in a Moscow academy when it was first unveiled by China on an international occasion seven years ago.

On March 23, 2013, in a packed auditorium at the Moscow State Institute of International Relations, the vision of building a community with a shared future for mankind came into view of the international society. 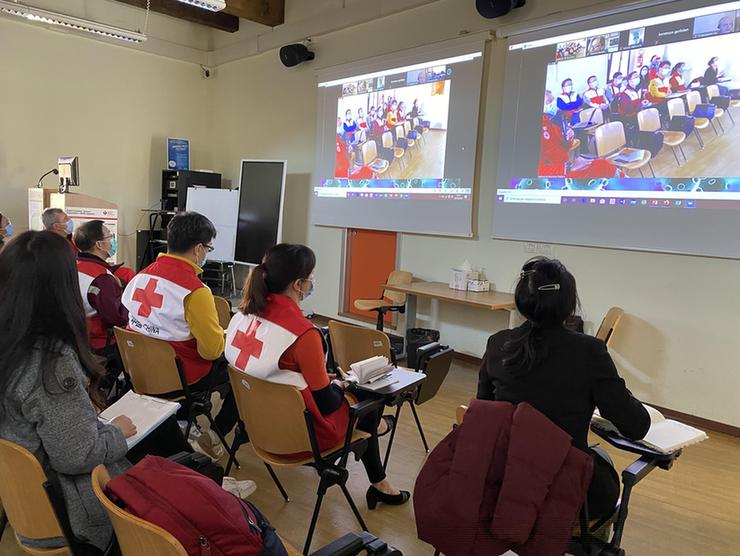 "It is an idea related to the coordination of policies of different countries in the economic and social spheres and in disaster management, without establishing any uniformity or someone's hegemony," Kashin said, adding the pandemic will be an important topic on international occasions in the future.

The pandemic so far has spread to more than 180 countries and regions, with about 300,000 confirmed cases and over 12,000 deaths, disrupting people's normal life and also taking a heavy toll on the global economy.

WHO Director-General Tedros Adhanom Ghebreyesus said China's "impressive" efforts in tackling the public health crisis not only effectively contained the virus at home but also created a window of opportunity for the world.

On the global stage, China has shared its anti-virus experience with more than 100 countries and organizations, given a 20-million-U.S.-dollar donation to the WHO, and sent supplies and medical teams to countries in need. 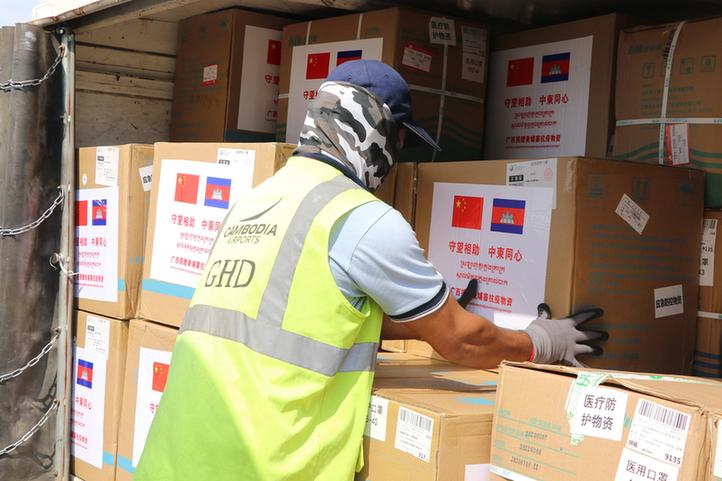 Such moves have translated into practice how a world community works towards a shared future, especially in achieving common health for mankind.

Xi's vision offers a much-needed new way of thinking for the world and conveys a great hope, said Robert Kuhn, a leading U.S. expert on China and chairman of the Kuhn Foundation.

"In so many ways, the nations of the world must act for the common good of humanity, especially in wake of the growing pandemic," Kuhn said. "It behooves people of goodwill everywhere to work to transform the rhetoric into reality."