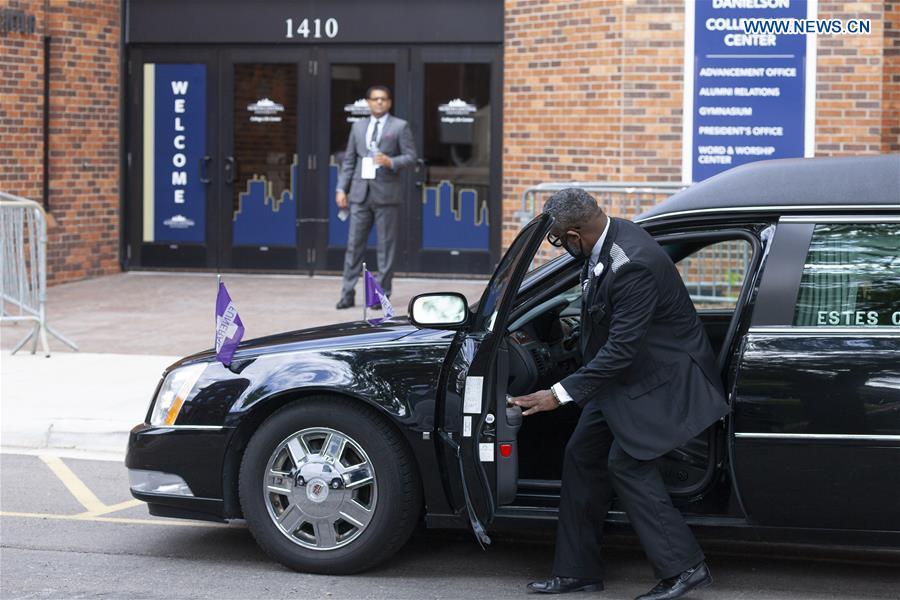 The hearse carrying George Floyd's casket arrives at North Central University for a memorial in Minneapolis, Minnesota, the United States, on June 4, 2020. Benjamin Crump, attorney for the family of George Floyd, who was suffocated to death while under police custody, said Thursday that it was the "pandemic of racism" that killed the black man. (Photo by Ben Hovland/Xinhua)

WASHINGTON, June 4 (Xinhua) -- Benjamin Crump, attorney for the family of George Floyd, who was suffocated to death while under police custody, said Thursday that it was the "pandemic of racism" that killed the black man.

In a packed auditorium at North Central University in downtown Minneapolis -- the city in which Floyd was killed by four former police officers -- the Floyd family, civil rights advocates, Minnesota state officials, and federal lawmakers including Senator Amy Klobuchar and Representative Ilhan Omar, as well as celebrities, gathered together to memorialize yet another victim of racial injustice in the country.

"We don't want two justice systems in America. One for black and one for white," Crump said, echoing his own words a day earlier ahead of the announcement of charges against the cops involved. "What we endeavor to achieve is equal gestures for the United States of America."

Prior to the memorial, hundreds of Minneapolis residents paid their tribute to Floyd by laying wreaths at a makeshift memorial site near the store where Floyd died. "All these people came to see my brother. And that is amazing to me that he touched so many people's hearts," Floyd's brother Philonise Floyd said at the memorial.

Floyd's death has instigated nationwide protests against police abuse and racial discrimination at a time when the nation is still grappling with the spread of the coronavirus.

Although violent rioting has by and large subsided, peaceful demonstrations continued following Wednesday's announcement that Derek Chauvin, the one who kept kneeling on Floyd's neck even as he lost consciousness, was charged with second-degree murder, and that the three others received charges of aiding and abetting murder.

"I'm proud of the protests, but I'm not proud of the destruction. My brother wasn't about that," Terrace Floyd, another brother of Floyd's, said in Brooklyn, New York, where a memorial service was being held simultaneously.

At the Minneapolis memorial, civil rights activist Alfred Sharpton said the reason African Americans have been marginalized is that the country kept its "knee on our necks."