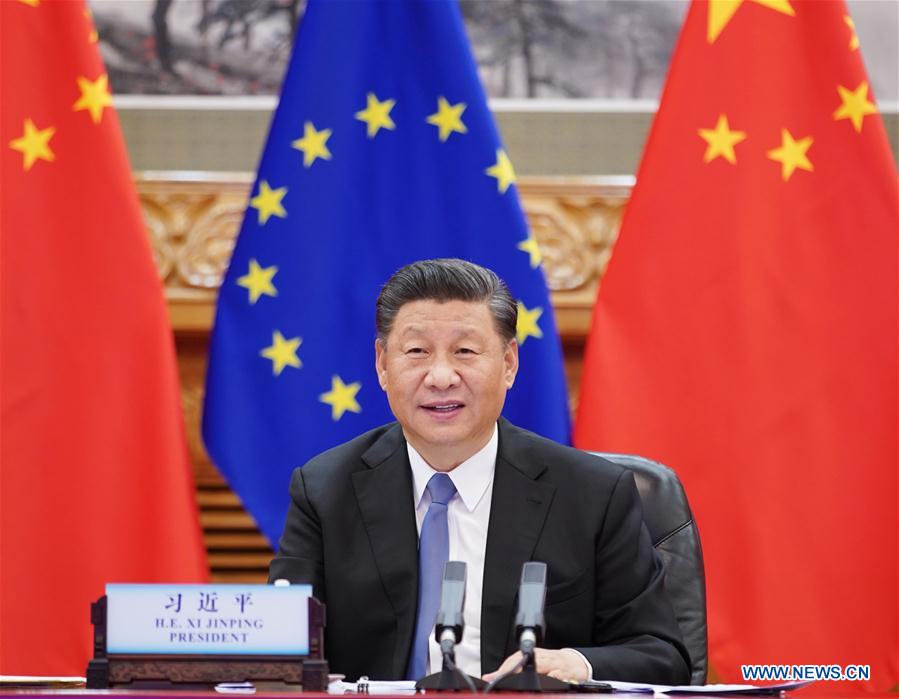 Since the COVID-19 outbreak, China and the European Union (EU) have supported and helped each other, Xi said, noting that China is willing to join hands with the European side to push for a more stable and mature relationship in the post-pandemic era and lift their ties to a new height.

"China wants peace instead of hegemony," said Xi, stressing that China is not only a country with a long history, but also a developing country full of vitality.

"The starting point of all our policies and work is to enable the Chinese people to live a happy life. We will steadfastly follow the path of peaceful development," Xi said, noting that China presents "opportunities, rather than threats."

He went on to say that China is "a partner, not an opponent" to the EU side, as China will continue to deepen reform and expand opening up, which will provide Europe with a new round of cooperation opportunities and development space.

"There is no conflict of fundamental interests between China and Europe. Cooperation far outweighs competition, and consensus far outweighs disagreement," he said, calling on the two sides to respect each other, and seek common ground while reserving differences.

The world under the impact of the pandemic is undergoing profound changes and facing more unstable and uncertain factors, Xi emphasized, calling for fostering new opportunities in crises and creating new prospects in the face of changing circumstances.

As two major forces, huge markets and great civilizations in the world, what China and the EU advocate and oppose and in what areas they cooperate will have global significance, Xi said.

China and the EU should serve as two major forces to maintain global peace and stability, Xi said, noting that China is willing to communicate with the European side on major issues.

"We believe that the EU will continue to move forward in the direction of unity, stability, openness and prosperity. China is delighted to see that the EU makes a constructive contribution to international peace and stability, and is willing to strengthen strategic cooperation with the EU to jointly cope with global challenges," he said.

Meanwhile, China and the EU should serve as two huge markets that promote global development and prosperity, Xi said.

"Our two major economies should play the role as dual engines of the world economy, drive the recovery of global economy, jointly support a scientific and orderly resumption of work and production, strengthen macroeconomic policy coordination, and keep global industrial and supply chains stable and smooth," Xi said.

The two sides should maintain market openness to each other, accelerate the negotiation of the China-EU investment agreement, strengthen cooperation in the green and digital fields, and develop a partnership in green development, said Xi, calling on the two sides to enhance third-party cooperation in Africa.

In addition, China and Europe should serve as two great civilizations that adhere to multilateralism and help improve global governance, the Chinese president said.

"No matter how the international situation changes, China will take the side of multilateralism and adhere to the global governance concept of extensive consultation, joint contribution and shared benefits," Xi said.

He said that China is willing to strengthen coordination and cooperation with the EU on major international and regional issues, strengthen dialogue and cooperation on global public health governance, and promote the building of a community of health for all.

Xi stressed that he would like to maintain close communication with the two EU leaders, advance a series of major China-EU political agendas, and push bilateral relations to a new level.

The two EU leaders said that the relationship between the EU and China is full of vitality, stressing that only through cooperation can the world cope with global challenges, and only dialogue and consultation can resolve conflicts and eliminate regional instability, as the world is facing great uncertainties.

The EU side is ready to conduct strategic dialogue with China to expand consensus in a candid manner, they noted.

They said that the EU is willing to reach an investment agreement with China at an early date.

They also expressed willingness to work with China to overcome the impacts of the pandemic as soon as possible and advance world economic recovery.

According to the two EU leaders, the EU is committed to multilateralism, and stands ready to enhance coordination and cooperation with China on public health security, climate change, sustainable development, third-party cooperation in Africa and other major issues within the frameworks of the United Nations, the World Trade Organization and the Group of 20.

The EU will work with China to achieve successful outcomes in major political agendas agreed upon by the two sides, according to the two leaders. Enditem