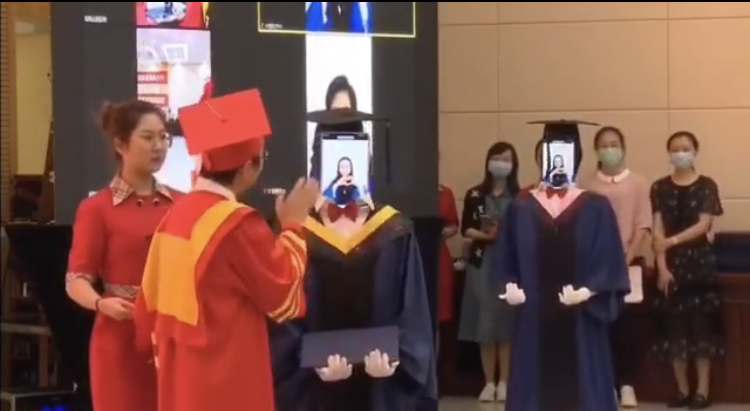 One particular video of an online graduation ceremony attracted netizens' attention on Weibo, a Chinese microblogging website on May 22. In the video, two robots, dressed in Master's degree graduation gowns, walked slowly towards their tutors. The tutors turned the tassels of their caps and issued a degree certificate to the robots, while graduates sitting at home greeted the mentors through the tablet computers the robots were carrying.

This video was of the graduation ceremony at Xianlin Campus of Nanjing University of Posts and Telecommunications in east China's Jiangsu province. The robots that appeared at the ceremony were made by a student robot innovation team that has made great achievements in major robot competitions at home and abroad.

Meanwhile, representatives of 70 graduates from the South China Institute of Software Engineering of Guangzhou University in South China's Guangdong attended a special graduation ceremony and degree awarding ceremony on June 19.

The online graduation ceremony featured elements from games, and drew a great deal of attention, with many netizens lauding it for being "so creative." According to a local newspaper, 21 students from the department of games in the university spent a week developing the online graduation ceremony with a virtual campus on the game platform.

The online graduation ceremony in the game was held at the same time as the real ceremony was taking place on the campus. Not only were graduates able to attend the ceremony on this platform, they could also walk freely on the virtual campus after the ceremony, or take group photos in front of the unique buildings of their alma mater.

A member of staff at the university said, "I hope that students can leave with no regrets and have great memories of their beautiful years in the university."