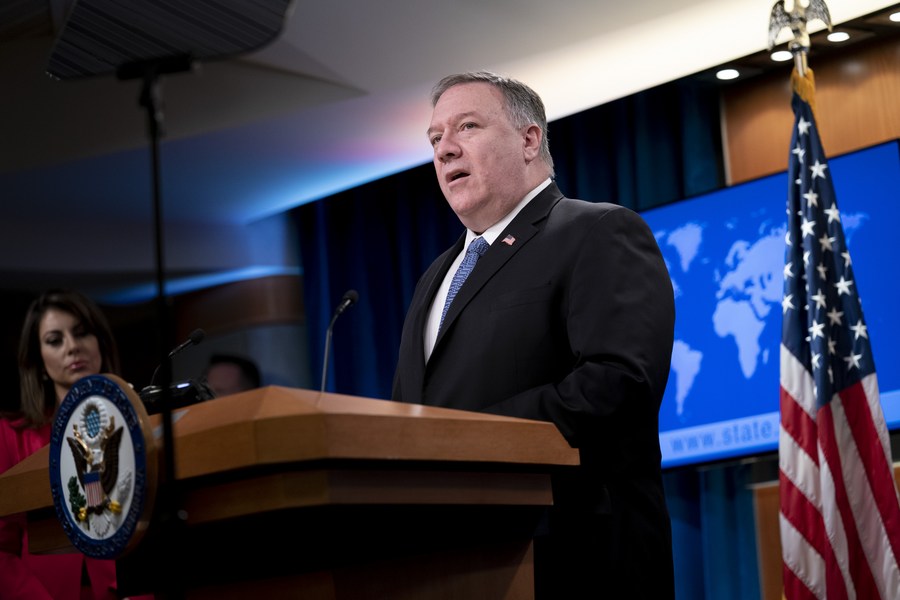 BEIJING, July 27 (Xinhua) -- China on Monday rebuffed U.S. Secretary of State Mike Pompeo's slanderous remarks on the Communist Party of China (CPC), saying his sensational and irresponsible claims were criticized and condemned by people who pursue peace and justice, including Americans with a broader vision.

Richard Haass, president of the U.S. Council on Foreign Relations, recently cited his article in Washington Post titled "What Mike Pompeo doesn't understand about China, Richard Nixon and U.S. foreign policy" on Twitter to criticize Pompeo's speech at the Richard Nixon Presidential Library. In his words, "Pompeo's China speech Thursday not only misrepresented history but advocated a policy for the most important relationship of this era that is neither viable nor coherent. That he delivered it at the Nixon Library only added insult to injury."

When asked to comment on that, Chinese Foreign Ministry spokesperson Wang Wenbin said at regular press conference that Pompeo negated every aspect of China-U.S. relations over the past 40 years, flagrantly attacked the CPC and called on countries to gang up on China.

"His outrageously deranged words have been criticized and condemned by all people who love peace and have a sense of justice, including those in the United States," Wang said.

"Pompeo's accusation of 'CPC's designs for hegemony' is out of not only ignorance but also bias," the spokesperson said.

Wang said that the CPC started with only dozens of members, and today it has grown into a major party with over 91 million members and has long been the ruling party in the world's most populous country. The reason for it, which Pompeo is ignorant of, is that the CPC always puts people's interests as the first priority, and always sticks together with the people through thick and thin. As revealed in a research recently published by the John F. Kennedy School of Government of Harvard University, under the leadership of the CPC, the Chinese people's overall support and satisfaction toward the central government exceeds 93 percent. According to a research result released by Edelman, 95 percent of the Chinese people trust the Chinese government, ranking the top of all countries surveyed, while the United States is the second to last with trust from only 48 percent citizens. The CPC's goal is to realize the great renewal of the Chinese nation, not replacing the United States. In the end, the international status of the United States depends on itself, not others. The CPC is a political party that strives for the well-being of the Chinese people as well as the progress of mankind. China champions and practices the Five Principles of Peaceful Coexistence. China is the largest contributor of peacekeepers among the five permanent members of the UN Security Council, and has been contributing to the peaceful settlement of the Korean Peninsula nuclear issue, the Iranian nuclear issue and other regional and international hotspots, as well as the response to climate change and other global challenges. In recent years China has contributed over 30 percent to the world economic growth, and has helped a lot in the international response to the financial crisis in Asia and the global financial crisis.

"These are all facts witnessed by the whole world, which cannot be erased by Pompeo," Wang said.

"Pompeo was calling for an anti-China coalition in his speech, but he seems to have forgotten that in the 21st century, instigation of hatred and confrontation runs counter to the trend of the times. The United States gains no support in trying to reverse the wheel of history," Wang said.

"Pompeo talks all about safeguarding democracy and freedom, but he doesn't represent democracy and freedom at all. He serves the U.S. hegemony and the interest groups behind him. But long gone are the days of ideological confrontation. The world today is on an unstoppable trend toward multi-polarity," he said.

"It has been almost half a century since President Nixon's visit to China. The development of China-U.S. relationship over this period of time taught us that a steady and sound bilateral relationship grows only when there's equality and mutual respect," the spokesperson said.

"China doesn't intend to change the United States, and the United States surely cannot alter China. We would like to develop China-U.S. relations featuring coordination, cooperation and stability, but we reject any bullying and injustice," Wang said.

"The Chinese people are not weak-kneed, and the world are not easily deceived. We urge a few U.S. politicians to stop slandering the CPC and the Chinese people and undercutting China-U.S. exchange and cooperation," he said.

"We call on all peace-loving countries and people to step forward and say no to the insanity of Pompeo and his like that jeopardizes world peace," he added.