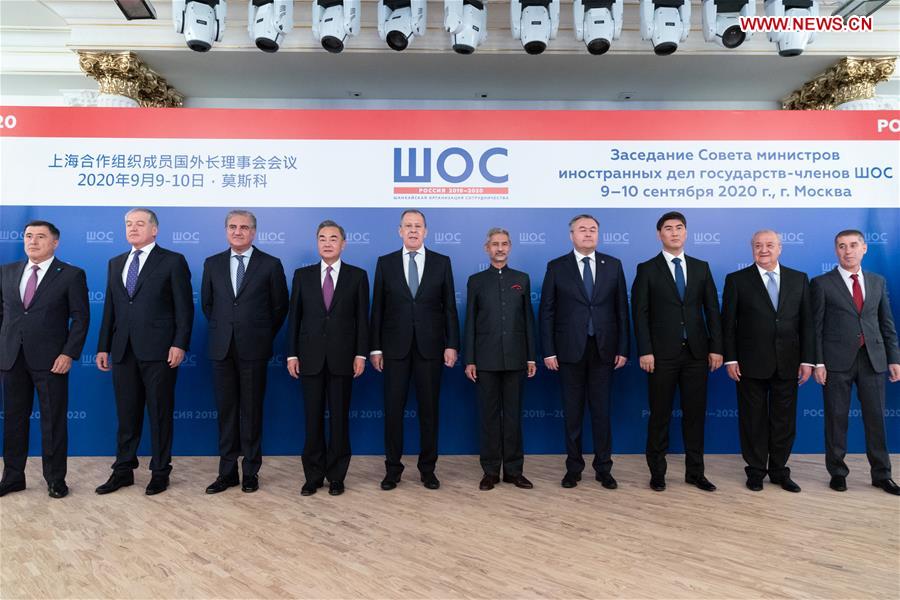 Chinese State Councilor and Foreign Minister Wang Yi (4th L) and other delegates pose for a photo ahead of a meeting of the Shanghai Cooperation Organization (SCO) Council of Foreign Ministers in Moscow, Russia, on Sept. 10, 2020. (Xinhua/Bai Xueqi)

MOSCOW, Sept. 10 (Xinhua) -- China stands ready to coordinate closely with its partners to guide the Shanghai Cooperation Organization (SCO) toward dealing with risks and challenges in a more effective manner, Chinese State Councilor and Foreign Minister Wang Yi said here Thursday during a meeting of the SCO Council of Foreign Ministers.

The COVID-19 pandemic is changing the world profoundly, the global economy is suffering unprecedented recession, unilateral bullying is intensifying, and global governance is in deep waters, Wang said.

Meanwhile, it should be noted that peace, development, cooperation and mutual benefit remain the irreversible trend of the times, that coordination among countries in fighting the COVID-19 pandemic shows the great strength of multilateralism, and that building a community with a shared future for mankind has become the firm choice of more and more countries, he said.

At the meeting, the Chinese senior official made five suggestions on strengthening cooperation within the framework of the SCO.

We must firmly establish a sense of a community with a shared future for mankind, firmly support each other in following a development path that suits one's own national conditions, as well as maintaining political security and social stability, and never allow external forces to intervene in the internal affairs of SCO member countries, a "color revolution" to succeed in this region, or the regional peace and stability to be undermined, he said.

As long as we unite as one and cooperate sincerely, the future of our countries can be held by our own peoples, and the hard-won regional stability will be maintained effectively, he said.

Secondly, SCO member countries should persist in unity and cooperation to jointly defeat COVID-19, Wang said, adding China is willing to deepen cooperation with all parties in the fight against the pandemic, continue to promote the establishment of joint prevention and control mechanisms in border areas, and prioritize the needs of SCO member countries after China successfully develops and puts into use COVID-19 vaccines.

We should strengthen cooperation in the field of public health, implement the results of the SCO online forum on traditional medicine, and help all countries defeat the epidemic as soon as possible, he said.

We should also push the international community toward adhering to the general direction of cooperation in the fight against the epidemic, opposing the politicization of the epidemic, the labelling of the virus and the wrong words and deeds that interfere with the global anti-epidemic fight, supporting the World Health Organization to play its due role, and promoting the building of a global community of health for all, he added.

We should practice a common, comprehensive, cooperative and sustainable security concept, maintain a high-pressure posture against the "East Turkistan" and other violent and terrorist forces, and strictly prevent the "three forces" from using the epidemic to cause chaos, he said.

We should also focus on the regional security situation, improve the SCO's law enforcement security cooperation mechanism, implement the organization's anti-extremism convention, resolutely curb the spread of all types of extremist ideas, and oppose double standards on anti-terrorism issues, he said.

Noting that China recently proposed the "Global Initiative on Data Security" to ensure the safe and orderly flow of data, providing a blueprint for the formulation of international rules for digital security, Wang said the initiative responds to the general concerns and meets the common needs of all parties, adding all SCO member countries are welcome to join the initiative.

Fourthly, the SCO should adhere to coordinated development and boost economic recoveries in the member states, Wang said.

He said the SCO members should balance curbing the pandemic and developing the economy, strengthen the coordination of macro-economic policies and the alignment of development strategies, create "express corridors" for personnel exchanges and "green corridors" for cargo transport, and ensure the stability and competitiveness of industrial chains and supply chains in the region, and continue to facilitate trade and investment, and comprehensively promote the high-quality construction of the Belt and Road.

China is establishing a new development pattern featuring dual circulation, which takes the domestic market as the mainstay and allows domestic and foreign markets boost each other, Wang said, adding that China will open up the economy further and stands ready to share new business opportunities with partners.

Fifthly, the SCO should stick to multilateralism and improve global governance, Wang said.

Adhering to multilateralism has become a foundation of national self-reliance, especially for many medium- and small-sized countries in the international community, Wang added.

The United States is becoming the "biggest destroyer" of the contemporary international order, he said.

Wang added that the SCO should invariably stand with multilateralism, fairness and justice, and move in the direction of the history.

The SCO should firmly defend the core position of the UN, protect the authority of the international law, prevent power politics from dragging the world back to "the law of the jungle," and resist unilateral bullying that hinders the democratization of international relations, he said.

During their addresses, foreign ministers of other SCO members fully recognized the positive role of the organization in maintaining regional security, bolstering development, and fighting against the COVID-19 pandemic.

They voiced readiness to strengthen cooperation on combating the epidemic, including vaccine and drug research and development.

As this year marks the 75th anniversary of the founding of the UN, the SCO members underlined the need to preserve the norms of international relations with the UN Charter at its basis, defend the core position of the UN, firmly uphold multilateralism and oppose unilateralism, and resist interference by external forces in the internal affairs of countries in the region.

The SCO members said they are committed to countering all forms of terrorism and promoting political settlements of regional hotspot issues through dialogue.

They agreed to intensify people-to-people and cultural exchanges among the member states, deepen interactions between the SCO and other international organizations, and promote the SCO to play a bigger role in international affairs.

The meeting of the SCO Council of Foreign Ministers made full preparations for the summit of the SCO in November.