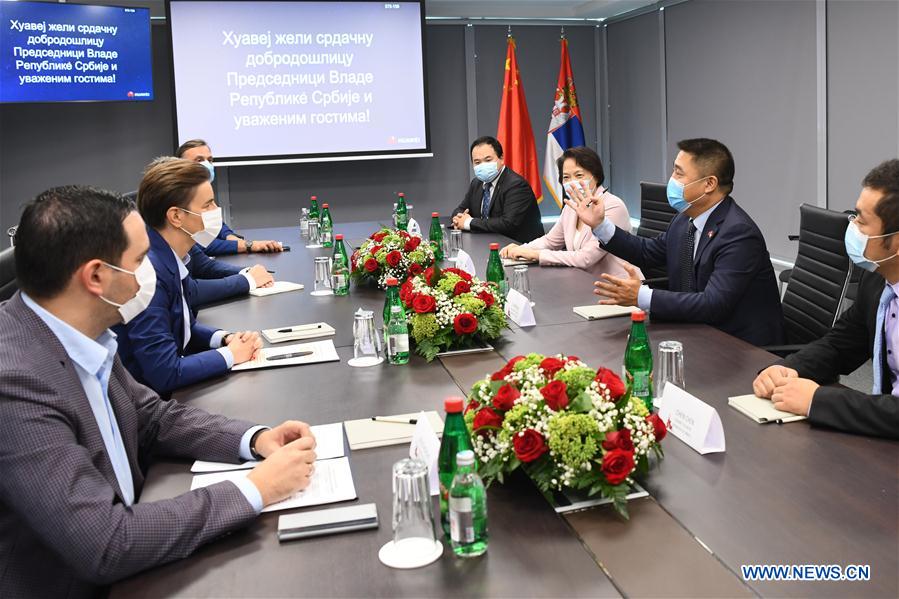 Serbian Prime Minister Ana Brnabic (2nd L) meets with Chinese Ambassador to Serbia Chen Bo (3rd R) and Li Mengqun (2nd R), president of Huawei Western Balkans, at Huawei's Innovations and Development Center in Belgrade, Serbia, on Sept. 14, 2020. Chinese tech giant Huawei opened its Innovations and Development Center here in the Serbian capital on Monday in the presence of Prime Minister Ana Brnabic, who sees it as an immense contribution to the digital transformation of the country's economy. (Huawei/Handout via Xinhua)

BELGRADE, Sept. 14 (Xinhua) -- Chinese tech giant Huawei opened its Innovations and Development Center here in the Serbian capital on Monday in the presence of Prime Minister Ana Brnabic, who sees it as an immense contribution to the digital transformation of the country's economy.

Brnabic said the center will help Serbia further accelerate its digital transformation, which has been among the key priorities of her government, and boost innovation and creativity in the Serbian economy.

"Large international companies have an immense role in the digital transformation of our economy, along with our educational system and local innovative and startup companies. Such partners are of key importance to us, and one of the best and biggest of them is certainly the Chinese company Huawei," she noted.

According to Brnabic, Serbia's cooperation with Huawei is not limited only to 5G network. She highlighted the three main aspects of the cooperation -- introduction of artificial intelligence, digitalization of education and introduction of smart cities across Serbia.

In their speeches, both Brnabic and Chen pointed out that the new center is yet another breakthrough in the comprehensive strategic partnership between the two countries.

"The digital industry in China plays a significant role in economic development. And now Serbia is in the process of digitalization development. Chinese companies are ready to share their technology and experience with Serbian partners. I am sure that such cooperation will be useful for both sides, Chinese and Serbian," said the Chinese ambassador.

Noting that Huawei has been in the country for 15 years, Li said the new development center has five core value propositions -- talent nurturing, ecosystem, smart solutions, localization, and agile innovation.

"We call this the 'Tesla' proposition, named after (Nikola Tesla,) one of the greatest inventors and physicists born and raised right here in the Balkans. Huawei has high hopes for the role that the Center will play in digital transformation," Li said.

"We hope and believe that the Serbian government will continue to create an open and fair business environment for ICT infrastructure construction. Together, we can make Serbia a world leader in the digital era with ubiquitous connectivity, digital platforms, and pervasive intelligence," Li concluded.