IMF revises up 2020 global economy forecast to contraction of 4.4 pct 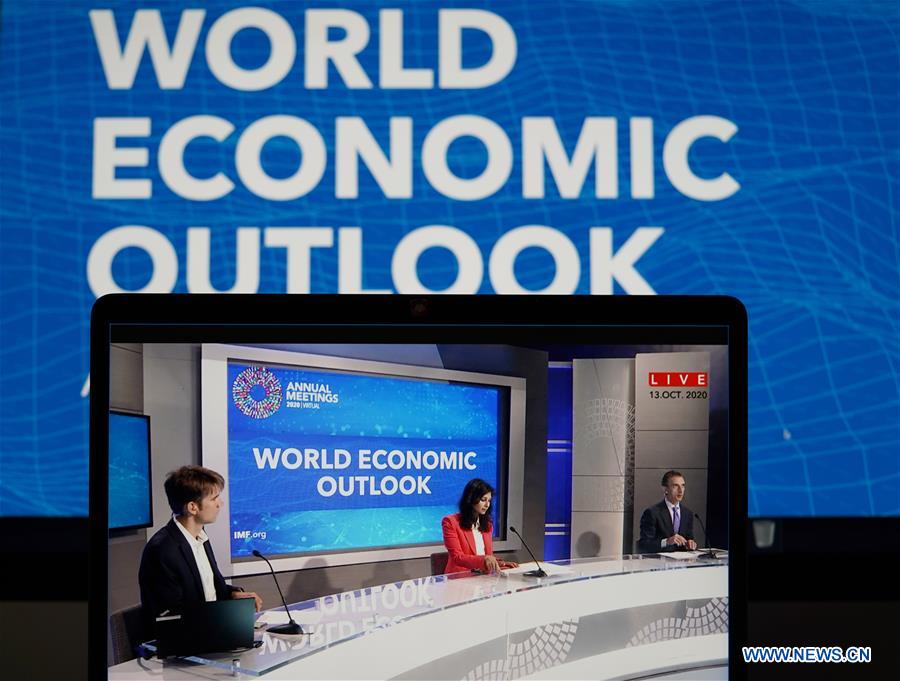 International Monetary Fund (IMF) chief economist Gita Gopinath (C) speaks at a virtual press briefing in Washington D.C., the United States, Oct. 13, 2020. The IMF on Tuesday projected the global economy to contract by 4.4 percent in 2020, 0.8 percentage point above the June forecast, according to its latest World Economic Outlook (WEO) report. China is expected to grow by 1.9 percent, the only major economy that could see growth this year. (Xinhua/Liu Jie)

WASHINGTON, Oct. 13 (Xinhua) -- The International Monetary Fund (IMF) on Tuesday projected the global economy to contract by 4.4 percent in 2020, 0.8 percentage point above the June forecast, according to its latest World Economic Outlook (WEO) report.

"This upgrade owes to somewhat less dire outcomes in the second quarter, as well as signs of a stronger recovery in the third quarter, offset partly by downgrades in some emerging and developing economies," IMF Chief Economist Gita Gopinath said at a virtual press briefing during the annual meetings of the World Bank Group and the IMF.

The ascent out of this calamity, however, is likely to be "long, uneven, and highly uncertain," Gopinath said. "It is essential that fiscal and monetary policy support are not prematurely withdrawn, as best possible."

In 2021, growth is projected to rebound to 5.2 percent, 0.2 percentage point below the June projection.

The IMF has upgraded its forecast for advanced economies for 2020 to a contraction of 5.8 percent, followed by a rebound in growth to 3.9 percent in 2021, the report showed.

The U.S. economy is expected to shrink 4.3 percent this year, with the Euro Area on track to contract 8.3 percent. Britain's economy will see a contraction of 9.8 percent, while Japan's economy could decline 5.3 percent.

For emerging market and developing countries (excluding China), the IMF has a downgrade with growth projected to be a contraction of 5.7 percent in 2020 and then a recovery to 5 percent in 2021.

Brazil and Russia are projected to contract by 5.8 and 4.1 percent respectively, while India's economy could see a contraction of 10.3 percent. China is expected to grow by 1.9 percent, the only major economy that could see growth this year.

The cumulative growth in per capita income for emerging-market and developing economies (excluding China) over 2020-21 is projected to be lower than that for advanced economies, which means the divergence in income prospects between the two groups is projected to worsen, Gopinath noted.

There remains tremendous uncertainty around the outlook with both downside and upside risks, the IMF chief economist said.

"The virus is resurging with localized lockdowns being re-instituted. If this worsens and prospects for treatments and vaccines deteriorate, the toll on economic activity would be severe, and likely amplified by severe financial market turmoil," Gopinath told reporters.

"Growing restrictions on trade and investment and rising geopolitical uncertainty could harm the recovery," she said.

On the upside, she noted, faster and more widespread availability of COVID-19 tests, treatments, vaccines, and additional policy stimulus can significantly improve the outlook.

"This crisis will likely leave scars well into the medium term as labor markets take time to heal, investment is held back by uncertainty and balance sheet problems, and lost schooling impairs human capital," the IMF chief economist said.

While the considerable global fiscal support of close to 12 trillion dollars and the extensive rate cuts, liquidity injections, and asset purchases by central banks helped saved lives and livelihoods and prevented a financial catastrophe, Gopinath noted that there is still much that needs to be done to ensure a sustained recovery.

First, greater international collaboration is needed to end this health crisis, she said. The IMF estimated that if medical solutions can be made available faster and more widely relative to its baseline, it could lead to a cumulative increase in global income of almost 9 trillion dollars by end of 2025.

Second, Gopinath urged policymakers -- to the extent possible -- to aggressively focus on limiting persistent economic damage from the crisis.

Over time, as the recovery strengthens, policies should shift to facilitating reallocation of workers from sectors likely to shrink on a long-term basis, such as travel, to growing sectors like e-commerce, she said.

The IMF chief economist also noted that emerging market and developing economies -- many constrained by elevated debt and higher borrowing costs -- will need to prioritize critical spending for health and transfers to the poor and ensure maximum efficiency. They will also need continued support in the form of international grants and concessional financing, as well as debt relief.

Lastly, policies should be designed with an eye toward placing economies on paths of stronger, equitable, and sustainable growth, Gopinath said.

"This is the worst crisis since the Great Depression, and it will take significant innovation on the policy front, at both the national and international levels to recover from this Great Lockdown," she added.