China leads rest of the world in superfast computers 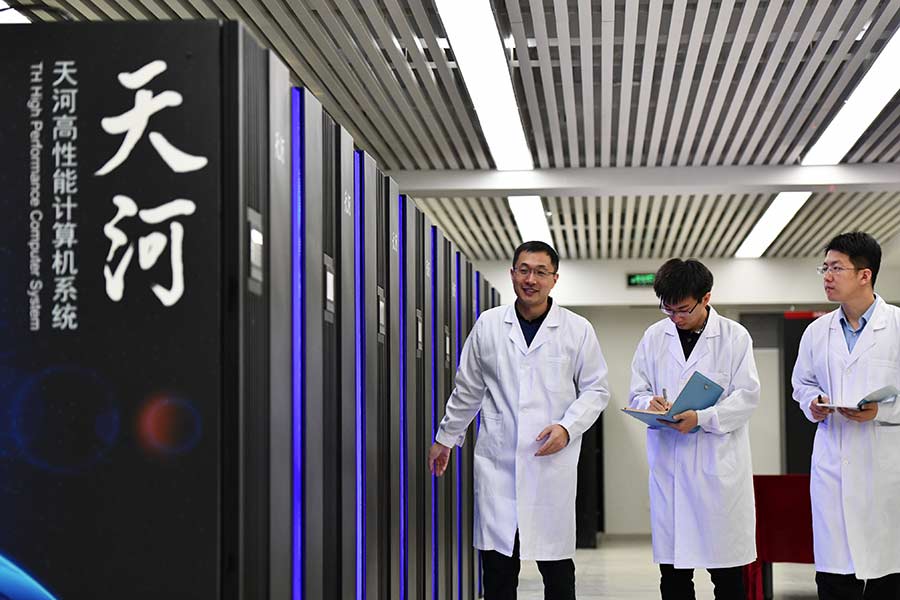 Scientists check the condition of the Tianhe-3 supercomputer at the National Supercomputer Center in Tianjin. [Photo/Xinhua]

Chinese manufacturers continue to dominate the list of makers of the world's fastest supercomputers in terms of the number of systems, according to Top500, an authoritative ranking on supercomputers globally.

Supercomputers installed by three Chinese vendors, Lenovo, Sugon and Inspur, account for 312 of the top 500 systems on the 55th edition of the Top500 supercomputer list.

Lenovo provided 180 of the systems, Sugon 68 and Inspur 64. The new fastest supercomputer is the Japanese system "Fugaku", followed by the second-placed "Summit" system of the United States. At number three is "Sierra," a system at the Lawrence Livermore National Laboratory in the US state of California.

Chinese supercomputers "Sunway TaihuLight" and "Tianhe-2A" were placed fourth and fifth on the Top500 list.

Xiang Ligang, director-general of the Information Consumption Alliance, a telecom industry advocacy, said: "It is of high importance to leverage supercomputer resources to accelerate research and development in key industries."

Companies are already working in that direction. Lenovo and the US tech giant Intel said in March that they have partnered with Shenzhen-based genomics sequencing company BGI Genomics to use super computing resources to accelerate the analysis of the genomic characteristics of the novel coronavirus.

Technology and life science healthcare experts from Lenovo and Intel worked together to support BGI researchers with the latest big data analytical technologies and computing resources so as to further advance the capabilities of its sequencing tools, and more effectively analyze the genomic characteristics of the virus.

"Experts in big data analytics and life sciences from Intel and Lenovo will integrate resources and expertise, to help address the critical challenges and drive the development of health and life sciences," Tong said.

Qian Depei, dean of the School of Data and Computer Science of Sun Yat-sen University, said in an earlier interview that though China has gained momentum in the number of supercomputers globally, there are still many challenges ahead.