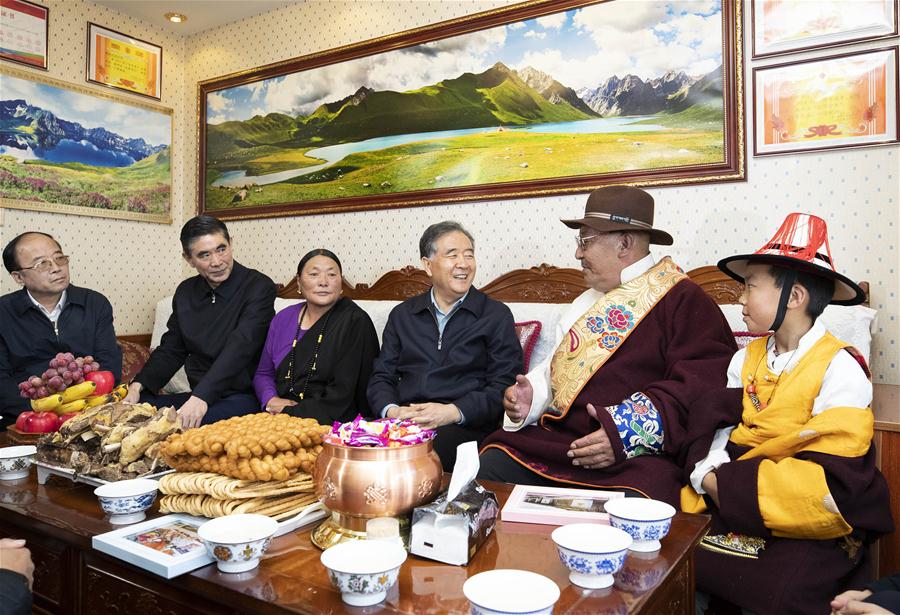 Wang Yang, a member of the Standing Committee of the Political Bureau of the Communist Party of China Central Committee and chairman of the Chinese People's Political Consultative Conference National Committee, visits a herdsman's home at a poverty-relief resettlement site in Maqin County of Golog Tibetan Autonomous Prefecture, northwest China's Qinghai Province, Sept. 14, 2020. Wang made an inspection tour in Qinghai Province from Monday to Tuesday. (Xinhua/Huang Jingwen)

XINING, Sept. 15 (Xinhua) -- China's top political advisor Wang Yang has stressed the importance of efforts to grasp the guiding principles from a key meeting on work related to Tibet and putting the policies into action.

Wang, a member of the Standing Committee of the Political Bureau of the Communist Party of China (CPC) Central Committee and chairman of the Chinese People's Political Consultative Conference National Committee, made the comments during an inspection tour in northwest China's Qinghai Province from Monday to Tuesday.

Wang called for efforts toward a profound understanding of the CPC's policies on governing Tibet for a new era, for people to be aware of the new situation and tasks facing work related to Tibet, and for the promotion of long-term peace and stability in Tibetan-inhabited areas.

Various activities should be carried out to communicate the guiding principles from the seventh Central Symposium on Tibet Work, he noted.

More efforts are also needed to handle deep-seated issues that have a bearing on enduring peace and stability, Wang said, adding that Tibetan Buddhism should be guided in adapting to the socialist society.

Effective social governance measures should be summarized to form a modern governance system that conforms to actual local circumstances, he noted.