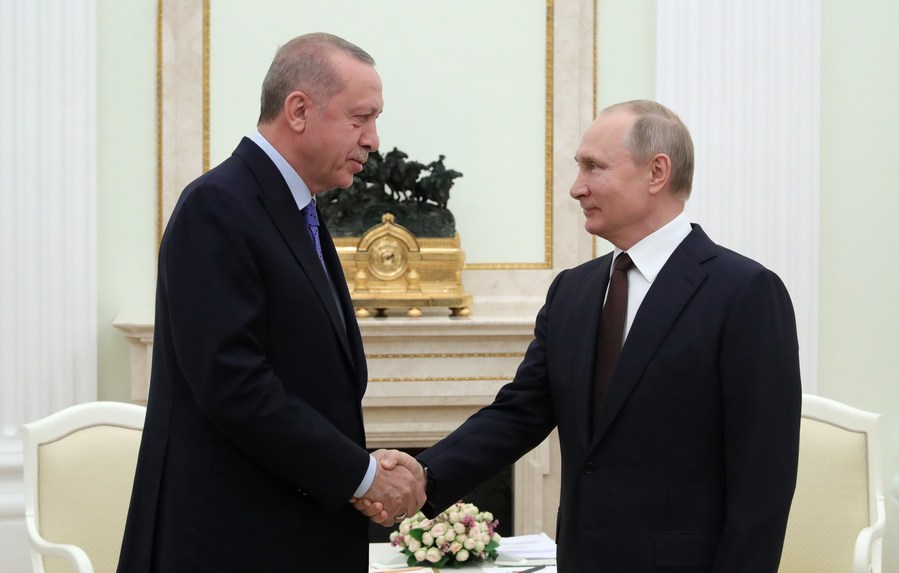 Russia expressed the hope that Turkey would contribute in a constructive manner to the de-escalation of the conflict, considering Turkey's membership in the OSCE.

MOSCOW, Oct. 14 (Xinhua) -- Russian President Vladimir Putin held a telephone conversation with Turkish President Recep Tayyip Erdogan, during which both parties stressed the importance of observing the humanitarian ceasefire in Nagorno-Karabakh, the Kremlin said Wednesday in a statement.

Both sides addressed the conflict in the disputed Nagorno-Karabakh region, reaffirming the importance of observing the humanitarian truce agreed upon during a trilateral meeting between Armenia, Azerbaijan and Russia on Oct. 10 in Moscow.

They spoke in favor of stepping up the political process, in particular, based on the developments of the Organization for Security and Co-operation in Europe (OSCE) Minsk Group, according to the statement.

"The Russian president expressed serious concern over the participation of militants from the Middle East region in the hostilities. The urgent need for mutual efforts aimed at an immediate cessation of the bloodshed and a transition to a peaceful settlement of the Nagorno-Karabakh problem was stressed," it said.

Russia expressed the hope that Turkey would contribute in a constructive manner to the de-escalation of the conflict, considering Turkey's membership in the OSCE.

Armenia and Azerbaijan agreed on a ceasefire in the Nagorno-Karabakh region on Saturday, following lengthy negotiations in Moscow. The deal was announced in a joint statement by Armenian, Azerbaijani and Russian foreign ministers.