BEIJING, Oct. 17 (Xinhua) -- China is making a final sprint to eliminate absolute poverty as it marked the seventh National Poverty Relief Day, also the 28th International Day for the Eradication of Poverty, on Saturday.

Leading this effort is President Xi Jinping, also general secretary of the Communist Party of China (CPC) Central Committee and chairman of the Central Military Commission.

The year 2020 was set by the Chinese leadership as the deadline to eradicate poverty. In early March, Xi convened a large televised symposium on poverty alleviation. There, he reiterated the deadline and vowed to lift the remaining 5 million-plus people out of poverty by the end of the year, despite the sudden strike of COVID-19.

In late September, Xi said China has "every confidence" of achieving the goal within the set time frame.

The nation will meet the poverty eradication target set out in the 2030 Agenda for Sustainable Development 10 years ahead of schedule, Xi told the 75th session of the United Nations (UN) General Assembly.

In his latest instruction made public on Saturday, Xi said while the anti-poverty fight is in its final stretch, there should be no letting up until a complete victory has been secured.

Poverty has plagued China for thousands of years. Since the founding of the People's Republic of China in 1949, especially the reform and opening up in 1978, the anti-poverty war led by the CPC had lifted over 700 million rural people out of poverty.

At that time, 98.99 million Chinese lived under the poverty line, earning a per capita annual income of less than 2,300 yuan, or about 1 U.S. dollar a day. The country entered what is known as the toughest phase of poverty reduction -- when the ratio of the impoverished falls to under 10 percent of a country's total population.

About one month after taking the helm of the Party, Xi braved the winter cold to visit poor villagers in Hebei Province. Sitting down with them, Xi asked about their income, if they had sufficient food and enough quilts and coal to stay warm through the winter. 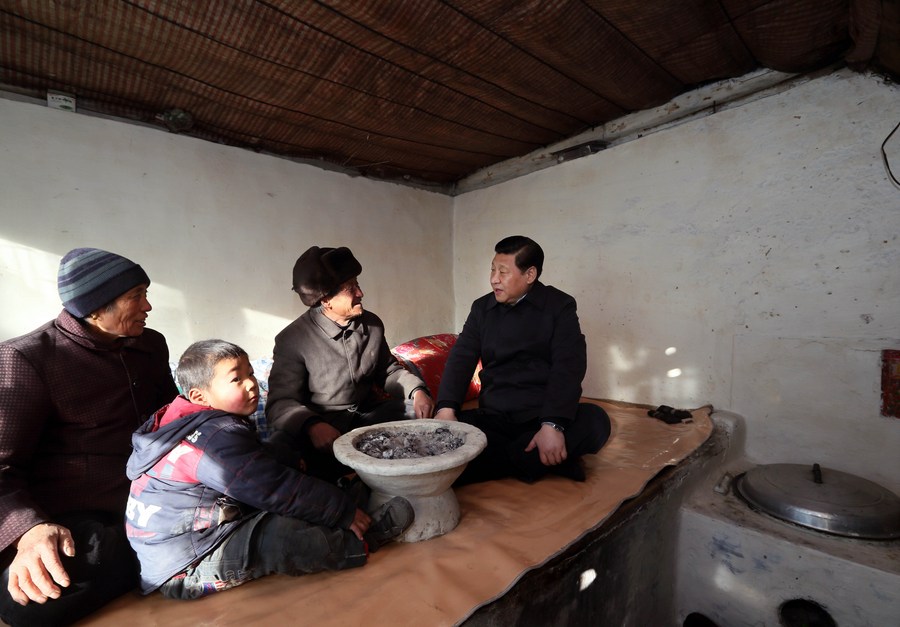 In November 2013, Xi went to Shibadong, a Miao ethnic minority village nestled in the mountains of central China's Hunan Province. There, he put forward the concept of targeted poverty alleviation.

Poverty relief should be "meticulous like doing embroidery," rather than akin to "killing fleas with a hand-grenade," Xi said.

Across the country, all impoverished people and the factors that led to their poverty are identified. Each household or individual is given a custom poverty relief plan.

They might get help to start a small business, be relocated out of mountains, or receive training to find a job in cities. And there is a system to keep track of progress to ensure the measures are having the desired effect.

Xi has put poverty relief work under the unified leadership of the CPC with 90 million members. Party chiefs at all levels were required to assume the primary responsibility. Over 2.9 million public sector officials were sent from cities and towns to villages to fight poverty "at the front line."

Xi has convened a series of meetings on poverty alleviation. Before every such meeting, he would visit impoverished regions to conduct research, learn about local situations and hear opinions of grassroots officials and members of the public. 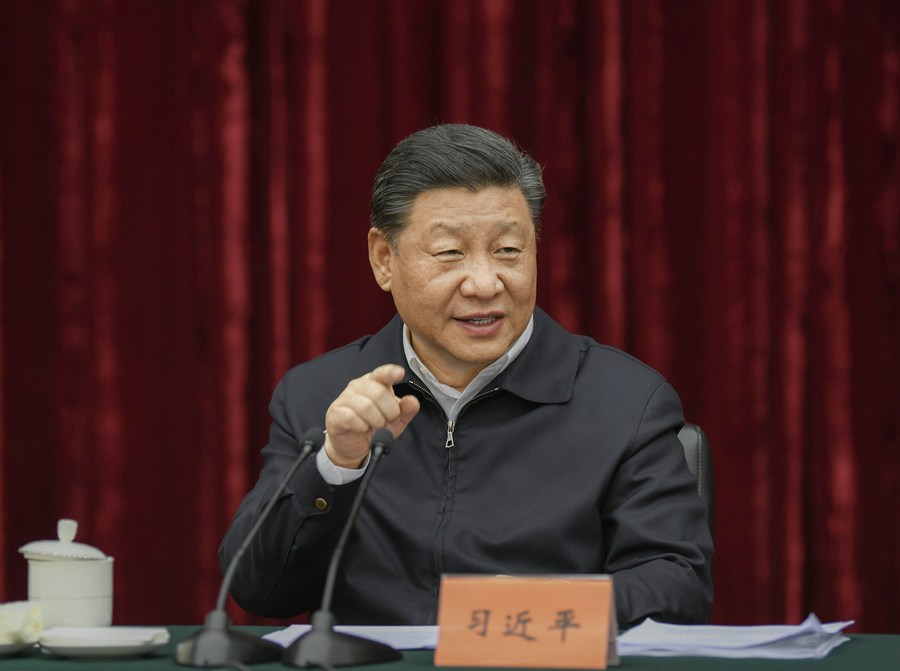 Xi has a complete portfolio of poverty relief plans. He required meeting the targets: rural poor people do not have to worry about food and clothing and have access to compulsory education, basic medical services and safe housing.

He stressed the role of education to stop poverty from being passed from one generation to another, underlined the collaboration between eastern and western regions, lauded relocation as an effective anti-poverty solution, and repeatedly warned against needless formalities, red tape, or perfunctoriness.

"Poverty alleviation must have genuine effects that can win the approval of the people and stand the test of practice and history," Xi said.

Yuri Tavrovsky, a sinologist and professor at the Peoples' Friendship University of Russia, said under Xi's leadership China's anti-poverty fight has notably gathered pace. Defeating poverty before the CPC's 100th founding anniversary will lay the foundation for the realization of the Chinese Dream, he said.

LEAVE NO ONE BEHIND

Xi is no stranger to poverty. As a teenager and young adult, he spent seven years with peasants on the Loess Plateau where he lived in cave-like adobe houses and slept on flea-infested bed-stove made of clay.

He joined the CPC in the village of Liangjiahe, and had his first experience as a grassroots-level Party secretary there. Xi once said his biggest wish back then was to make it possible for the villagers to have meat on their plates.

Rising through the Party ranks, Xi spent the most time on poverty relief. He said eliminating poverty, improving people's well-being and achieving common prosperity for everyone are an essential requirement of socialism and an important mission of the CPC.

"Poverty is not socialism," he said.

Xi has personally taken charge of commanding the anti-poverty war and vowed to tackle poverty "with force and tenacity as a hammer drives a nail." 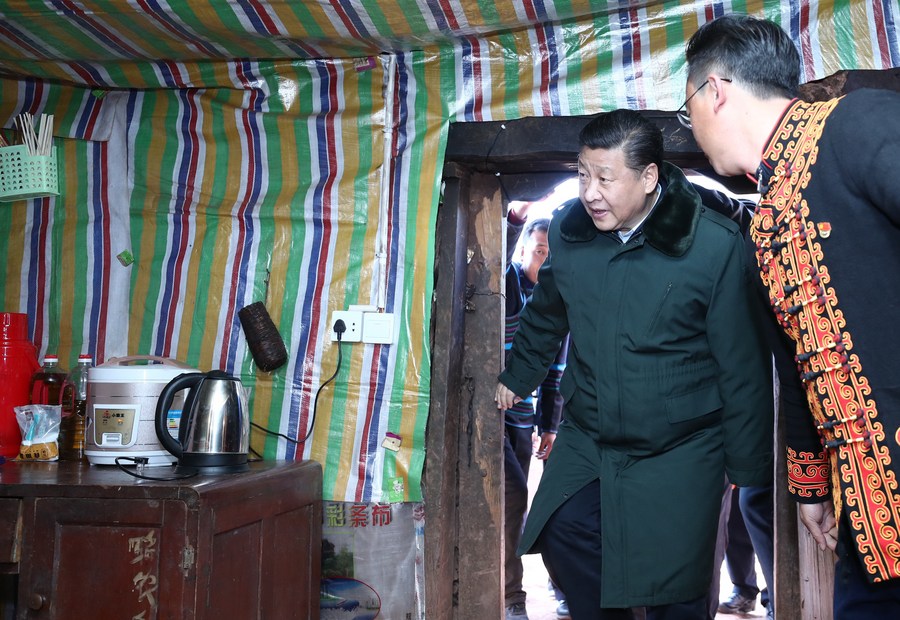 Poverty alleviation was a priority in his roughly 80 domestic inspections over the past eight years. These trips took him to some of the country's most remote and impoverished areas.

Xi stressed that no one should be left behind. In just over four years into the Party's top post, he visited all of China's 14 "contiguous impoverished areas."

At times he had to travel by plane first, then transfer to train and car before reaching remote villages.

He once cited an old Chinese adage: "Great leaders of nations treat their people like a father loves his son and an elder brother loves his younger sibling. They will be saddened to hear of their people's hardship or toil."

"What impresses me most is that Xi always puts people's well-being first," said Zhao Ruqi, an official who worked with Xi in the eastern province of Fujian.

Ismatulla Bekmuratov, a professor at Tashkent State University of Oriental Studies in Uzbekistan, attributed China's poverty reduction success primarily to the attention of Xi, who made poverty eradication a centerpiece of the country's development plan and personally led the war against poverty.

This attention has been consistent over time and sometimes meticulous.

In 1997, Xi was deputy Party chief of Fujian. He headed the province's leading group on pairing-up support for Ningxia Hui Autonomous Region. He focused on solving the water problems of poor villagers, pushing for new water storage and irrigation projects in the arid land.

In 2016, when he visited a village in Ningxia, Xi checked the shower facilities in a villager's home, and was pleased to learn that the family had a solar water heater.

Recalling his early trips to some poor areas as the general secretary of the CPC Central Committee, Xi said his heart sank when he saw the bumpy and rugged roads, harsh living conditions of the locals and heard stories of children dropping out of school, or patients not getting treated in time.

"But when I went to poor villages in these few years, I saw substantial changes," Xi said at the March symposium. "Seeing the smiles of the people, I feel delighted." 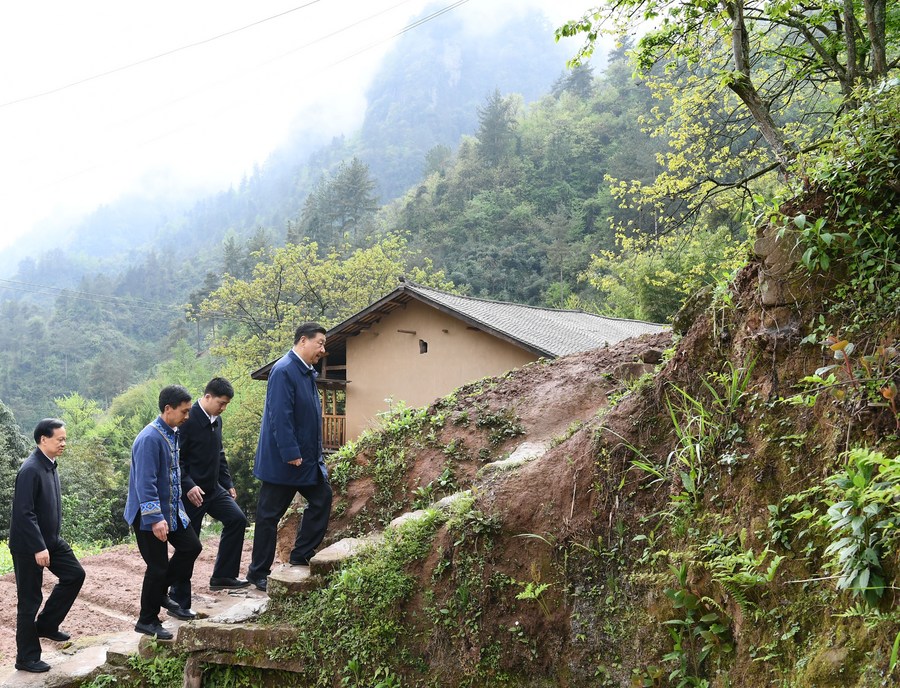 "When we have defeated poverty in this generation, we will have brought to an end, once and for all, the extreme poverty that has shackled the Chinese nation for millennia," Xi said.

The number of Chinese living in poverty dropped from 98.99 million to 5.51 million in the seven years since 2013.

UN Secretary-General Antonio Guterres said China made the greatest contributions to world poverty alleviation in the past decade.

In China, the per capita net income of the poor rose from 4,124 yuan in 2016 to 9,057 yuan in 2019, registering an average annual growth of 30 percent. Countless rural people saw a significant improvement in their lives.

"We used to earn 2,000 yuan a year growing potatoes and corn. Now I earn 2,100 yuan a month working for a travel company. So do my eldest daughter and son," said Gu Baoqing, a 72-year-old woman in rural Hebei.

Gu's family is just one of the many households that have shaken off poverty by participating in the tourism sector.

The development of rural industries has changed lives. As has relocation. In the past five years, more than 9 million rural poor in China were moved out of inhospitable areas that mired generations of inhabitants deep in poverty.

Yang Qingzhong recalled that his family of six had to cram themselves into a tiny mud-brick house in mountainous Guizhou Province.

In 2018, the family moved into a spacious modern apartment in town, allocated by the government. And he found a job in a workshop near home, making rattan chairs.

Rural infrastructure, education and health-care all improved. Some rural hospitals partnered with their metropolitan counterparts to offer high-quality medical services to rural residents.

"Illness-induced poverty is one of the toughest problems in rural areas," said Hu Yi, head of the public hospital in the county of Zhenxiong in Yunnan Province. "Now they don't have to travel far to get treated, not even for serious illness."

Benefitting from the poverty eradication campaign, some ethnic minorities, residing in the country's remote, southwestern corners, took big strides in their development.

"Poverty eradication is only the first step; better days are still ahead," Xi said in a letter to the Dulong ethnic minority group, congratulating the Dulong people for collectively shaking off poverty.

Zhaotong, a city in Yunnan with a huge poor population, has seen the blossoming of rural industries including the growing of potatoes, apples and chili peppers following Xi's visit in 2015. These industries have grown large in scale and some even helped the city gain international acclaim, said Yang Yalin, the city's Party chief.

Xi Jinping addresses the general debate of the 75th session of the United Nations General Assembly via video on Sept. 22, 2020. (Eskinder Debebe/UN Photo/Handout via Xinhua)

China has also contributed to the global anti-poverty fight. In September 2015, at high-level meetings to commemorate the 70th anniversary of the UN, Xi put forward new measures to help developing countries grow their economies and improve their people's livelihoods.

Over the years, China has helped other countries boost employment and improve people's livelihoods through the Belt and Road Initiative.

According to the Ministry of Commerce, despite the impact of COVID-19, Chinese companies' non-financial direct investment in 54 countries along the Belt and Road grew by over 33 percent to reach 72.18 billion yuan in the first seven months of 2020.

A World Bank report last year said globally the initiative could contribute to lifting about 7.6 million people from extreme poverty and 32 million from moderate poverty.

In the village, he saw a winding mountain trail turned into a 6-meter-wide concrete road. Every household has running water, while there are hiking trails, post offices, ATMs, a rural library and even a poetry society.

While China is on the way to winning the epic war against poverty, Xi has reminded people that shaking off poverty is not the finish line, but the starting line of a new life and new endeavor.

He demanded a dovetailing drive of rural vitalization following the victory of poverty eradication.

This clearly shows Xi's confidence in eliminating China's absolute poverty in 2020, as he has started to plan for the country's development after the completion of building a moderately prosperous society in all respects.