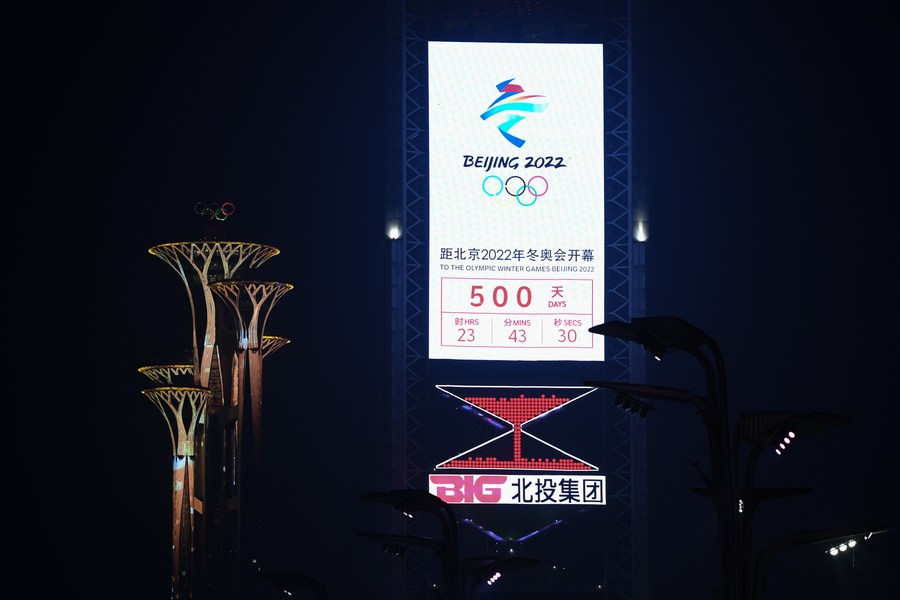 A countdown clock displaying 500 days to go until the start of the 2022 Beijing Winter Olympic Games in Beijing. (Xinhua/Ju Huanzong)

With the year 2020 about to come to an end, Xinhua News Agency selects the 10 most significant pieces of international sports news this year.

BEIJING, Dec. 28 (Xinhua) -- The past year has been one like none other for the sporting world. Let's take a look back at the events that have defined this turbulent period.

Here is Xinhua News Agency's selection of the 10 most significant pieces of international sports news in 2020, in chronological order:

- The 3rd Winter Youth Olympic Games were staged in the Swiss city of Lausanne, the Olympic Capital, between January 9-22. China dispatched 53 athletes to participate in 57 events, claiming three golds, four silvers, and five bronzes at what was considered the most significant international winter sports event before Beijing 2022.

- On January 26, retired NBA mega Kobe Bryant was killed in a helicopter crash above Calabasas, southern California. The only team he had played for throughout his NBA career, the Los Angeles Lakers, beat the Miami Heat in the Finals to win a record-equaling 17th NBA champions on October 11. On November 25, Argentine football legend Diego Maradona died of a heart attack at his home, aged 60. Maradona participated in four World Cups with the Argentine national team, among which the 1986 World Cup was remembered as his masterpiece. He played every minute of every game, scoring five goals and making five assists to lead Argentina to the champion. 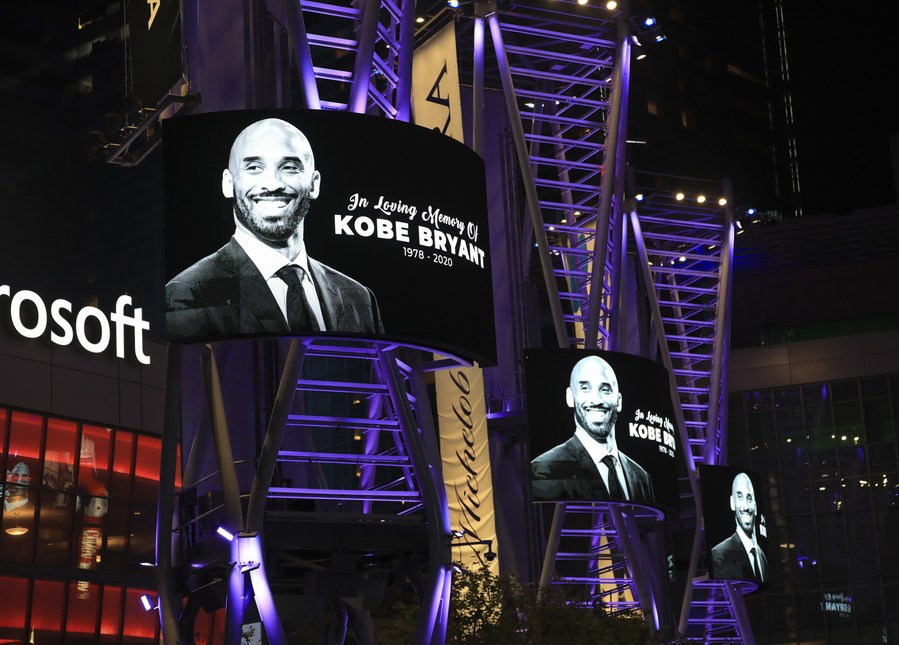 Kobe Bryant's portrait is displayed outside the Staples Center to pay respects to to the basketball legend, in Los Angeles, California, the United States, on Jan. 26, 2020. (Xinhua/Li Ying)

- Despite the disruption of its 2020 calendar, several world records fell in track and field during the year. On February 8, Armand Duplantis cleared 6.17 meters in Torun, Poland, to set the indoor world record in men's pole vault, and went on to clear the bar of 6.18m at the Glasgow Grand Prix of World Athletics Indoor Tour one week later. The Swede also produced the highest ever mark in an outdoor event as he cleared 6.15m at the Diamond League meeting in Rome on September 17. 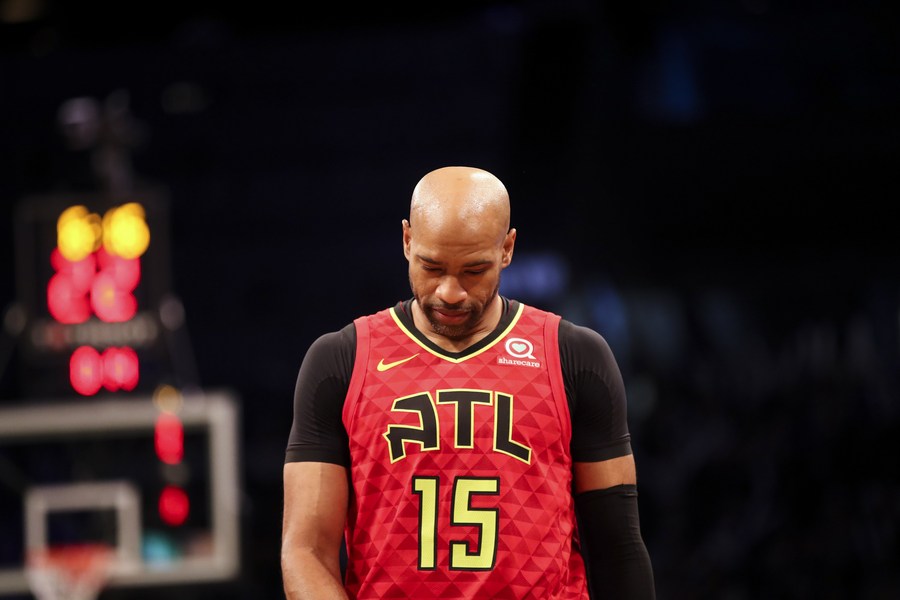 Vince Carter of Atlanta Hawks walks off the court in an away game against Brooklyn Nets on January 9, 2020. (Xinhua/Wang Ying)

- On March 24, the International Olympic Committee (IOC) and the Tokyo 2020 Organizing Committee jointly announced that, in view of the COVID-19 pandemic, the Tokyo Olympic Games were rescheduled to a date beyond 2020 but not later than summer 2021. It is the first time that the modern Olympic Games being postponed since the birth in 1896, although they have been canceled in 1916, 1940 and 1944 due to World War I and World War II. A string of other international sports events including football's European Championships were either postponed or canceled due to the pandemic. 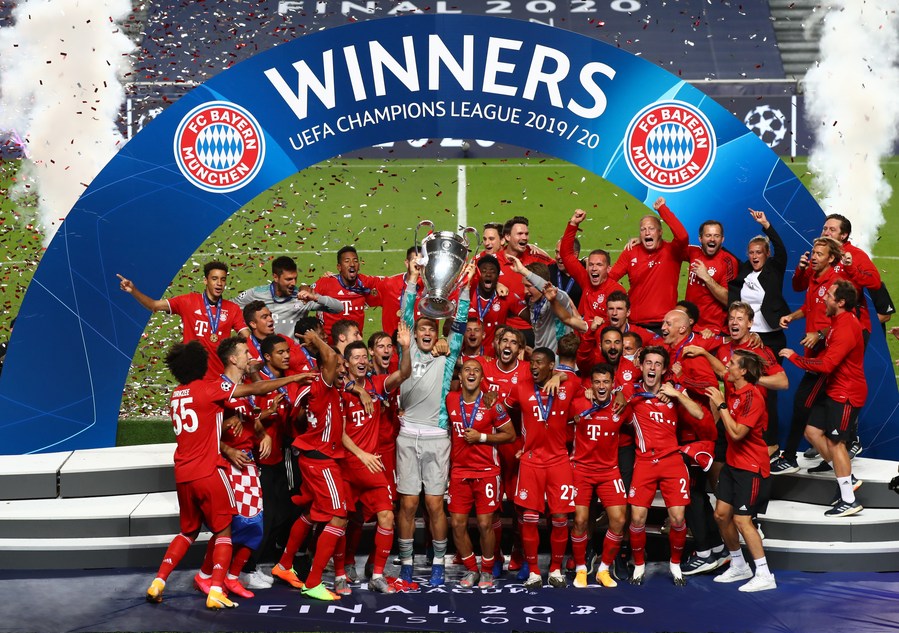 - Despite the challenges brought on by the COVID-19 pandemic, China's preparations for the 2022 Winter Olympic Games progressed steadily. Construction of all the competition venues and related infrastructures will be completed by the end of this year. The past few months witnessed a number of milestones, such as the launch of a global competition for the medal, torch, and apparel designs. More than 960,000 people worldwide have registered to volunteer during the Games. Beijing 2022 has signed up 38 sponsors and suppliers in total to date. 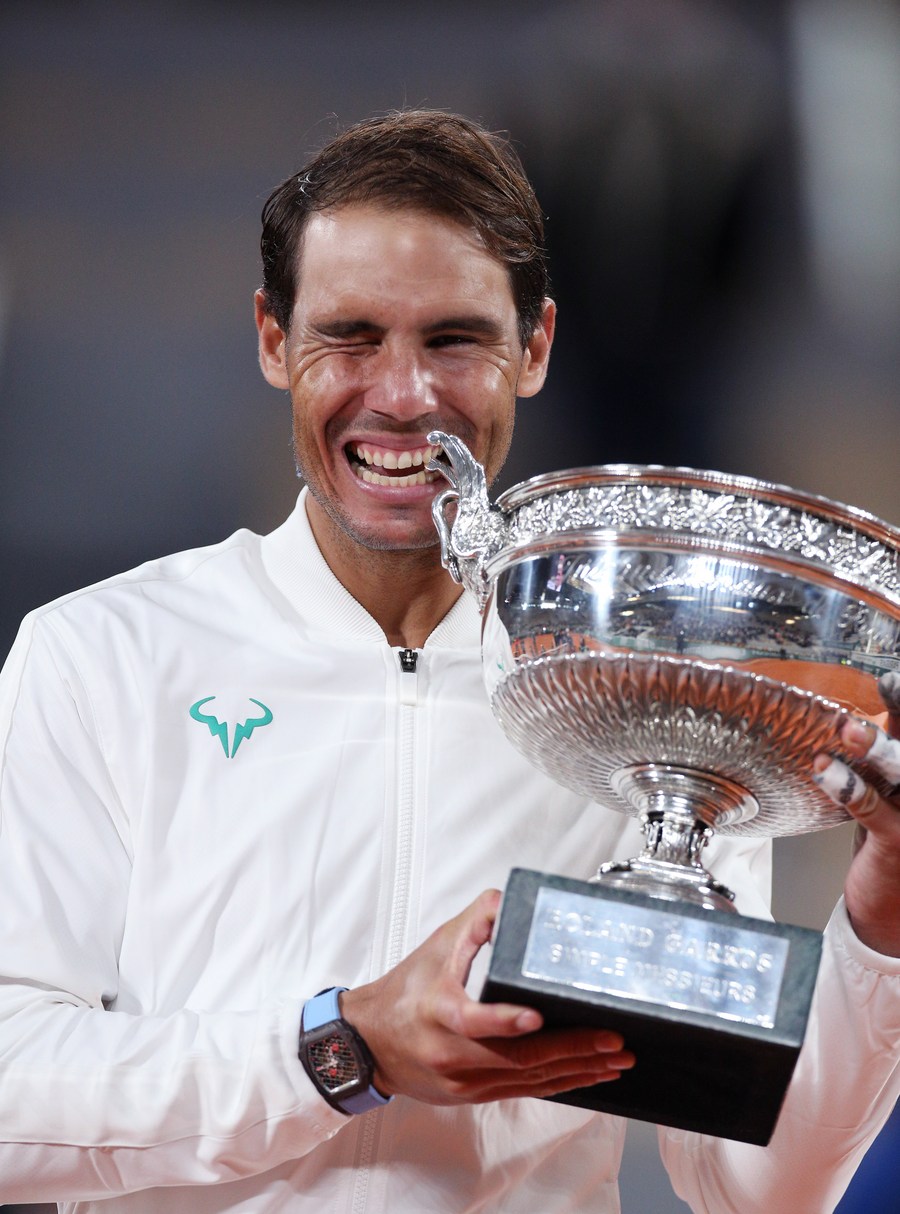 Rafael Nadal of Spain celebrates with the trophy during the awarding ceremony after winning the men's singles final match against Novak Djokovic of Serbia at the French Open tennis tournament 2020 at Roland Garros in Paris, France,on Oct. 11, 2020. (Xinhua/Gao Jing)

- On December 7, breaking, skateboarding, sport climbing, and surfing were confirmed as additional sports to be added to the 2024 Paris Olympic Games. Weightlifting had four events removed from the Paris 2024 program, with its quota reduced to 120 athletes from 196 at Tokyo 2020.

- On December 24, the Swiss Federal Tribunal set aside a previous ruling by the Court of Arbitration for Sport (CAS) to ban Chinese swimmer Sun Yang for eight years and ordered the case back to the CAS to render a new award. In February, CAS found the three-time Olympic champion guilty of refusing to cooperate with sample collectors during a visit to his home in September 2018. The World Anti-Doping Agency brought the case to the CAS after the world swimming governing body FINA had issued Sun Yang a warning.