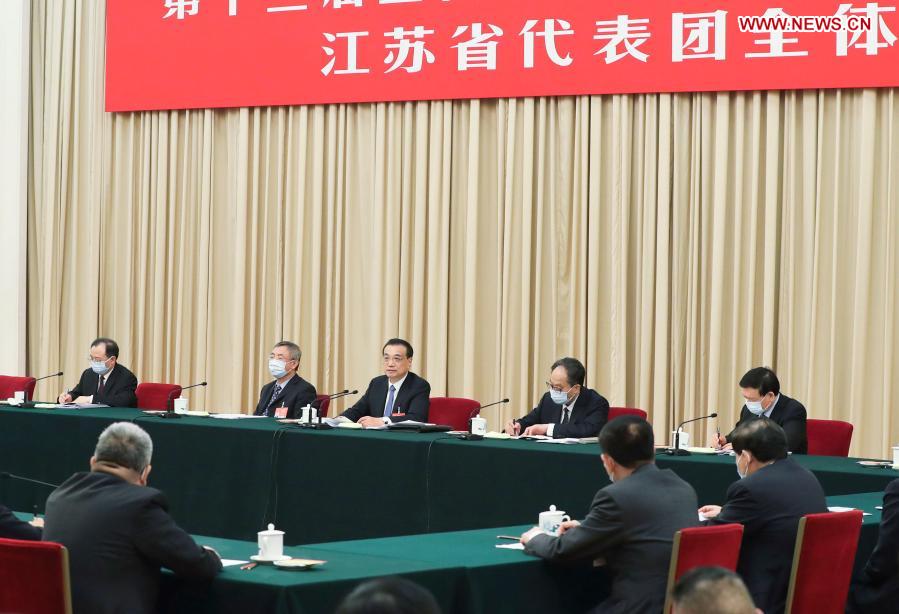 Chinese Premier Li Keqiang, also a member of the Standing Committee of the Political Bureau of the Communist Party of China Central Committee, joins the Jiangsu delegation in deliberation at the fourth session of the 13th National People's Congress (NPC) in Beijing, capital of China, March 7, 2021. (Xinhua/Yao Dawei)

The leaders -- Li Keqiang, Li Zhanshu, Wang Yang, Wang Huning, Zhao Leji and Han Zheng -- are all members of the Standing Committee of the Political Bureau of the Communist Party of China (CPC) Central Committee.

Premier Li Keqiang joined the Jiangsu delegation in deliberation. Noting that the country will still face risks and challenges in its development this year, he expressed the hope for Jiangsu to better play its role as a province with strong economic performance in cementing the foundation for national economic stability and recovery and in promoting high-quality development.

While joining the Gansu delegation for deliberation, Li Zhanshu, chairman of the NPC Standing Committee, called for efforts to consolidate the achievements made in eradicating poverty and advance the rural vitalization strategy.

Wang Yang, chairman of the National Committee of the Chinese People's Political Consultative Conference, urged efforts to resolutely deter any attempt seeking "Taiwan independence" and interference by external forces and stressed advancing the peaceful development of cross-Strait relations when attending deliberation with lawmakers from Taiwan.

While participating in the deliberation of the Yunnan delegation, Wang Huning, a member of the Secretariat of the CPC Central Committee, underscored the importance of deepening the education on ethnic unity and progress, enhancing the capacity of ethnic minority areas to achieve self-development, and building robust, stable and prosperous border areas.

Zhao Leji, secretary of the CPC Central Commission for Discipline Inspection, demanded continuous efforts to improve the conduct and guide Party members to pass on the glorious traditions and fine conduct of the Party when joining in the deliberation with deputies from Ningxia Hui Autonomous Region.

Vice Premier Han Zheng called on the lawmakers from Hong Kong and Macao to fully support the legislative exercises of the NPC and its standing committee to improve the electoral system of the Hong Kong Special Administrative Region (SAR) and resolutely support chief executives and governments of the SARs in administering the regions in accordance with the law, making new contributions to the sound and sustained implementation of "one country, two systems." Enditem