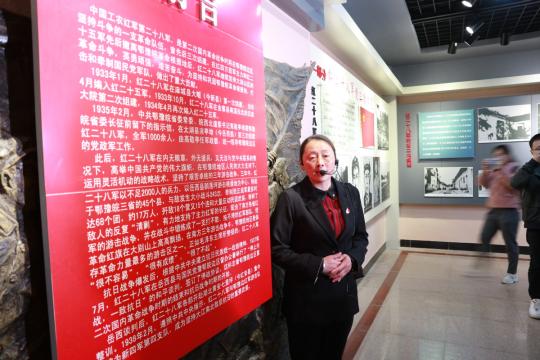 Wang Fang introduces the history of the Red Army in Anhui province to visitors in the village of Yaoluoping in Yuexi, Anhui. (Photo by Zhu Lixin/China Daily)

Wang Fang stands on a square in Yaoluoping village of East China's Anhui province, telling visitors the stories of her forefathers' generations.

Behind her is a memorial hall for the 28th Corp of the Chinese Red Army, which was headquartered in the village in the 1930s. Several kilometers away is a mountain, whose shape is like a harrier, a species of eagle, half-extending its wings.

The village of Yaoluoping, which literally means 'harrier lands on the ground', is named after the specially shaped mountain.

"It's like a harrier trying to take off, while the pioneers of the village wished that the harrier could stay to protect them," said Wang, who learned the story when she was a child. The woman, 40 years old and mother of two boys, volunteered to be a commentator at the memorial hall when it was opened to the public in 2008.

Her husband now runs a hostel, which provides catering and homestays to tourists and saw a net income of more than 300,000 yuan ($46,600) last year.

"I still remember the last words of my grandfather, who died in the 1990s, saying 'treasure your good life, which comes through great hardship'," she said.

Her great-grandfather, Wang Shirong, joined local farmers in a rebellion against the then-ruling Kuomintang, or Nationalist Party, because the extremely impoverished villagers could not feed themselves and were regarded as nonhuman.

After Wang Shirong died in battle, his wife took the children from the family's original dwelling in a nearby village to the more mountainous Yaoluoping.

After the 28th Corp of the Chinese Red Army was reformed in the village in 1935, when troops moved westward for the Long March, Wang Fang's grandfather, an ordinary villager, joined a civil team to take care of the wounded soldiers.

"The villagers were willing to sacrifice their own lives to protect the soldiers because they know the Red Army would bring their families a better life," said Wang Fang.

In the 1980s, her father became a postman, responsible for delivering mail to villagers. "In the first years, he walked, then he got a bicycle in around 1995, and a motorbike in around 2000," said Wang Fang.

The village now has 382 households with 1,828 residents, according to Wang Tianyou, its Party chief.

A former professional driver in the county town, he returned to the village in 2011, when there were only three hostels.

Now there are 67, providing 2,500 beds for tourists. With forest coverage of more than 95 percent and a national nature reserve nearby, the village received roughly 150,000 visits last year and saw a tourism income of 12 million yuan.

"One-fourth of the villagers are aged below 40. Most of the young adults migrated to cities for work, though more and more of them are returning," said Wang Tianyou. He said some of the villagers work for the hostels, others grow tea trees and vegetables.