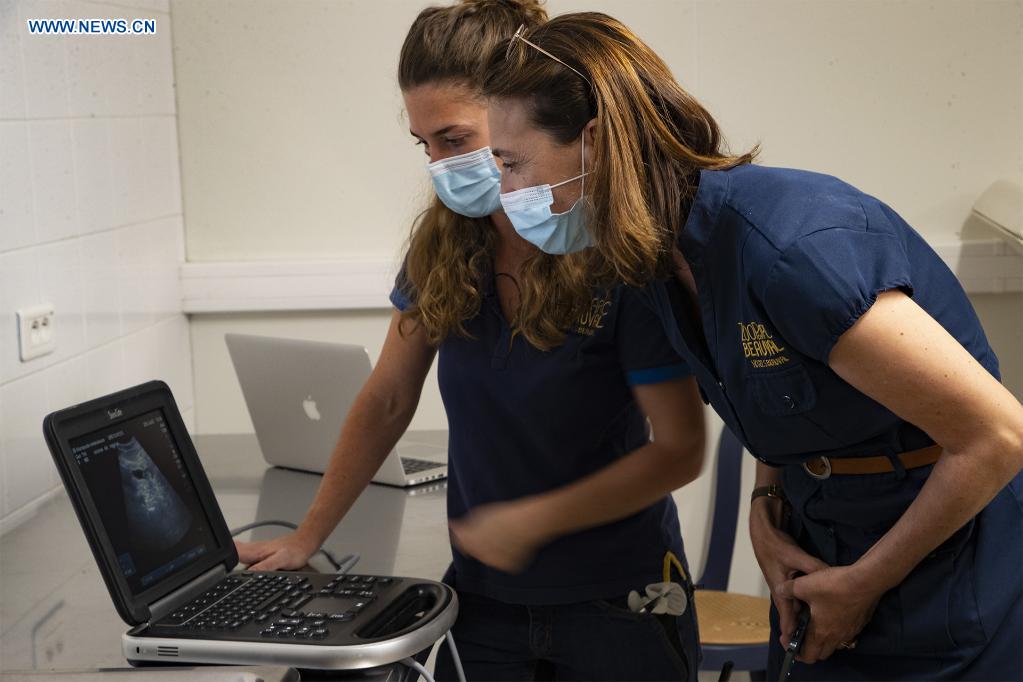 Staff members perform an ultrasound scan of female giant panda Huan Huan at the Beauval Zoo in Saint-Aignan-sur-Cher, central France, on July 23, 2021. Huan Huan, a giant panda at Beauval Zoo, is expecting twins and the birth of the cubs is scheduled for late July or early August, announced the zoo on Friday. (Beauval Zoo/Handout via Xinhua)

PARIS, July 23 (Xinhua) -- Huan Huan, a giant panda at Beauval Zoo in central France, is expecting twins and the birth of the cubs is scheduled for late July or early August, announced the zoo on Friday.

"A new ultrasound of Huan Huan, our female panda, performed today at the end of the afternoon, revealed the presence of a second baby panda!" said the zoo in its press release.

The second fetus measured 3.27 cm by 1.19 cm. The size of the first one, already seen on the first ultrasound image performed on Tuesday, more than doubled to 3.65 cm by 1.79 cm, it added.

Huan Huan, which means "happy" in Chinese, and her male pal Yuan Zi, were both born in Chengdu, China, and arrived in France in 2012 when they were three years old.

At the end of March, the two giant pandas tried to mate under the watchful eye of veterinarians and caretakers.

Artificial insemination was also carried out as a precaution, as a female panda is fertile only 24 to 48 hours per year, said the zoo.

In 2017, Huan Huan gave birth to twin cubs, the first panda babies born in France. The first cub died shortly after its birth and the second one was named Yuan Meng, which means "the realization of a dream" in Chinese.

In the wild and at other zoos around the world, giant panda mothers give birth to twins about 50 percent of the time. However, due to the difficulty of caring for two cubs simultaneously, typically only one of the twins survives.

Giant panda newborns are even more helpless than most other mammal infants because they don't open their eyes until they are about six to eight weeks old and don't move around until about three months. Enditem