Improved services for public key to development of Xiong'an

Construction workers celebrate the completion of the main structure of a new hospital with ribbons on their shovels in Xiong'an New Area, Hebei province, on Monday. [Photo for China Daily]

After getting four new apartments as compensation when land he owned was requisitioned for a construction project in Xiong'an New Area, He Xiaoliang was excited to hear that villagers will have easy access to a top-level hospital in the future.

He, 57, lives in Dahe village, Rongcheng county, Xiong'an New Area, in North China's Hebei province. Relocated to make way for the new area's construction, his family of six is looking forward to moving to new homes before the end of the year.

The hospital is the first top-level one being built in Xiong'an and its management and medical services will be supported by the Xuanwu Hospital affiliated with Capital Medical University, one of the top hospitals in Beijing.

"Going to hospital for serious illness will be much easier for us," He said. Residents previously went to a small, county-level hospital for minor illnesses, he said, and had to travel a long way to big neighboring cities like Beijing and Tianjin for treatment for severe illnesses.

Construction of the hospital's major structure was completed on Monday, Zhao Yuhua, the project's manager from Beijing Construction Engineering Group, said during a ceremony at the construction site on Monday.

Zhao said the hospital is expected to be put into use in 2023. His company is responsible for phase one of the hospital. Phase two is also under construction.

Located in the first area in Xiong'an to see construction projects get underway, the hospital's first phase covers about 13 hectares of land, will have 600 beds and will provide comprehensive medical services and research facilities.

With support from Beijing, Xiong'an is also building three schools to provide high-quality educational services for locals and people coming from Beijing as noncapital functions are moved there.

The schools will be supported by Beijing's No 4 Middle School, Shijia Hutong Primary School and Beihai Kindergarten when they are completed, which is expected to be before the end of the year, according to Beijing's office for the coordinated development of the Beijing-Tianjin-Hebei region.

Public services have been enhanced in Xiong'an New Area since its establishment in 2017 to help ensure the new area plays its role in a high-quality way.

Tasked with taking on functions that are not essential to Beijing's role as the national capital, Xiong'an is a key step in the national strategy of the coordinated development of the Beijing-Tianjin-Hebei region.

The relocation to Xiong'an of universities and hospitals administered by Beijing-based ministries, as well as the headquarters of centrally administered State-owned enterprises, will be a priority from this year, an unnamed official from the leading group for the coordinated development of the Beijing-Tianjin-Hebei region told Xinhua News Agency in an interview released on Friday.

To ensure the high-quality transfer of the functions and development, a local regulation on the new area's development, including government management, public services and environmental protection, was approved at the end of last month. Called the Hebei Xiong'an New Area Regulation, it will come into force next month.

Xin Wen contributed to this story. 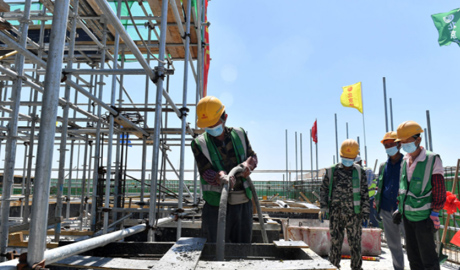