Rescuers hold umbrellas to shade the sick baby elephant from the sun in Xishuangbanna Dai Autonomous Prefecture, southwest China's Yunnan Province, Aug. 29, 2021. A newborn baby elephant in Xishuangbanna was abandoned by its herd only six days after its birth due to severe diseases including suppuration of umbilical cord. Local authorities have carried out emergency treatment for the ailing baby elephant. The doctor who is in charge of its treatment said on Tuesday that the baby elephant had recovered from its fever, and its illness and mental state showed a trend of improvement, yet the baby elephant was still not out of danger. (The Asian Elephant Breeding and Rescue Center in Xishuangbanna National Nature Reserve/Handout via Xinhua)

KUNMING, Aug. 31 (Xinhua) -- A sick baby elephant that was trapped in a banana plantation in southwest China's Yunnan Province and left behind by its herd only days after birth has been rescued by local authorities and is receiving treatment.

The elephant was found trapped in the plantation in Mengban Township in southern Yunnan's Xishuangbanna Dai Autonomous Prefecture on Saturday morning after it lagged behind a herd of some 40 elephants, according to the prefectural forest and grassland bureau, which has staff monitoring the migration of elephants in the region.

On Sunday morning, the bureau dispatched staff to rescue the trapped calf after confirming that its herd had not come back. It was later transferred to the Asian Elephant Breeding and Rescue Center in Xishuangbanna for diagnosis and treatment.

A physical examination showed that the male calf, which weighed 85 kg, was in critical condition, with a severely festered umbilical cord and symptoms including diarrhea, fever and tachycardia.

Veterinarians with the rescue center disinfected it and fed it medicines and goat milk, which helped improve its condition.

Bao Mingwei, a veterinarian with the center, said Tuesday morning that the calf's body temperature has returned to normal, and its condition has continued to improve.

However, the elephant is still not out of danger, Bao said.

"The calf is very young, which poses great difficulties for treatment," Bao said, adding that he is confident of curing the elephant, but the treatment may take a long time. 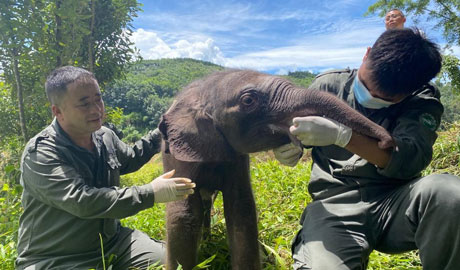