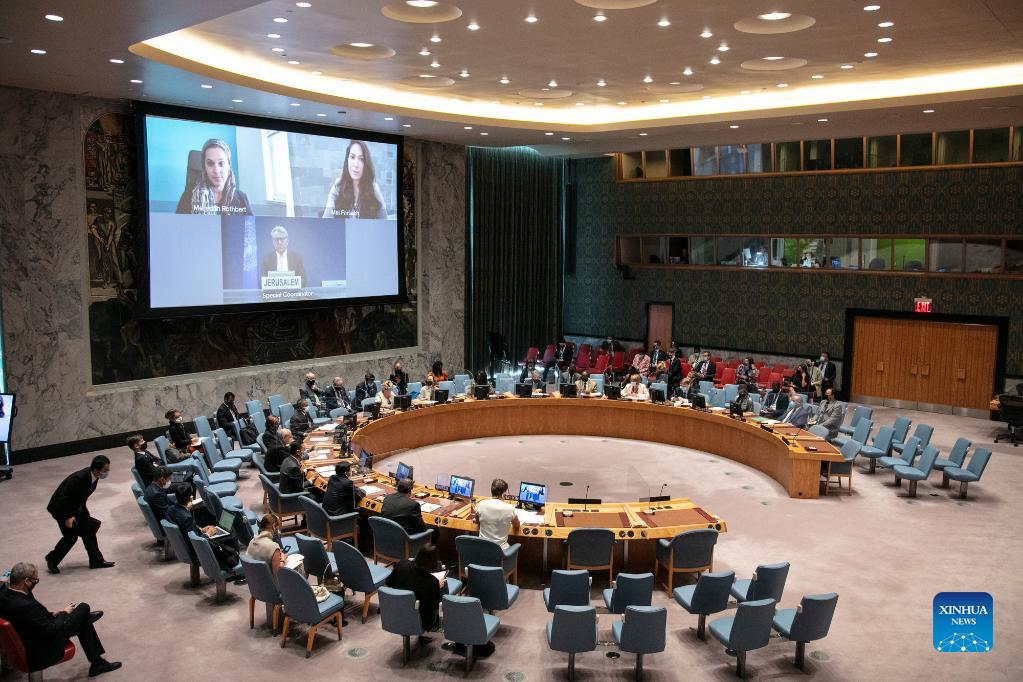 There were no new settlement housing plans advanced, approved or tendered between June 12 and Sept. 27, Wennesland told the Security Council in a briefing.

"I reiterate that all (Israeli) settlements are illegal under international law and that they undermine the prospect of achieving a viable two-state solution in line with UN resolutions, international law and prior agreements. The pause in new advancements and tenders of plans for housing units in settlements observed during this reporting period must become permanent," he said.

He expressed deep concern over the continued demolitions and seizures of Palestinian-owned structures, which have included internationally funded humanitarian projects. He urged Israel to cease demolitions and evictions and to approve plans that would enable these communities to build legally and address their development needs.

Citing the absence of Israeli-issued building permits, which are almost impossible for Palestinians to obtain, 302 structures were demolished or seized by Israeli authorities or demolished by their owners to avoid heavy Israeli demolition fees during the reporting period. These actions displaced 433 people, including 251 children and 102 women, said Wennesland.

On July 7, Israeli authorities demolished some 30 structures, of which 17 were provided as humanitarian assistance, in the Bedouin community of Humsa Al Bqai'a in the Jordan Valley. On July 14, Israeli authorities confiscated at least 49 structures in the Bedouin community of Ras al Tin in the Ramallah governorate. As a result, 84 people, including 53 children and 14 women, were displaced.

On Aug. 11, the Jerusalem Local Affairs Court froze the demolition of several dozen structures in the al-Bustan section of the Silwan neighborhood until Feb. 10, 2022, pending ongoing planning discussions, he said.

On Aug. 2, Israel's Supreme Court held a hearing to consider an appeal request by four Palestinian families facing forced eviction in the Sheikh Jarrah neighborhood in East Jerusalem. The judges made a proposal, which was not accepted, and the hearing was adjourned with no date to reconvene. There are currently some 970 Palestinians facing eviction in East Jerusalem, he said.

On July 2, some 50 Israeli settler families left the settlement outpost of Evyatar, illegal also under Israeli law, following an agreement with the Israeli government that the Israeli military would re-establish a presence at the site and a land survey would be conducted to determine land status, he said.

Across the occupied West Bank, including East Jerusalem, settler-related violence continued, including reports of armed settlers carrying out attacks against Palestinians in proximity to Israeli security forces, he said.

On Aug. 17, a 15-year-old Palestinian boy was attacked in the northern part of the occupied West Bank, during which a group of Israeli settlers kidnapped the boy and brutally assaulted him, said Wennesland.

During the reporting period, a total of 102 attacks occurred in which Israeli settlers or other civilians injured 36 Palestinians or reportedly damaged property. Palestinians perpetrated 193 attacks against Israeli settlers and other civilians in the occupied West Bank, including the throwing of stones, Molotov cocktails, and pipe bombs at civilian vehicles, resulting in 27 injuries and damage to property, he said.

"Israel, as the occupying power, has an obligation to ensure the safety and security of the Palestinian population and to investigate such attacks. I underscore that all perpetrators of violence must be held accountable and swiftly brought to justice," said the envoy. Enditem