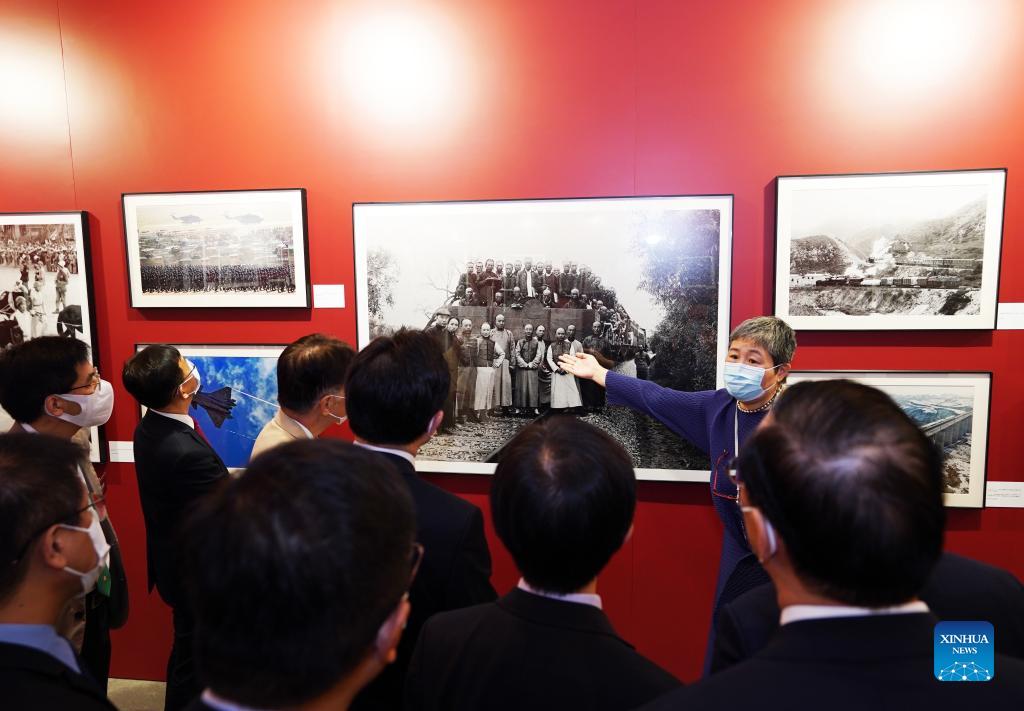 HONG KONG, Oct. 8 (Xinhua) -- A photo exhibition that opened Friday in the Hong Kong Special Administrative Region (HKSAR) showcased the unfading blood ties between Hong Kong and the motherland over the past 100 years, as well as the great achievements of China.

Most of the exhibits displayed at Hong Kong Central Library are selected from over 10 million precious pictures in Xinhua News Agency's China photo archives, which will bring Hong Kong residents back to the historic moments captured by cameras. There is also a special segment for Hong Kong.

The exhibition, sponsored by the China Merchants Group and running from Friday to Oct. 17, is jointly hosted by the HKSAR government, the Liaison Office of the Central People's Government in the HKSAR and Xinhua News Agency.

Lam said she hopes the exhibition will help residents learn about the great rejuvenation of the Chinese nation over the past century so that they can feel deeply the blood ties between Hong Kong and the motherland, and strengthen their national identity and pride.

Hong Kong has returned to the right track of "one country, two systems" thanks to the implementation of the national security law in Hong Kong and the improvement of Hong Kong's electoral system, she said.

Hong Kong will consolidate and enhance its advantages in the future, better integrate into the overall development of the country, and play an irreplaceable role on the country's journey toward its second centenary goal, Lam said.

Lu Xinning, deputy head of the Liaison Office of the Central People's Government in the HKSAR, also delivered a speech at the ceremony.

Deng Zhonghua, deputy director of the Hong Kong and Macao Affairs Office of the State Council, and He Ping, president of Xinhua News Agency, made speeches via video link, extending their congratulations on the exhibition.

After the exhibition ends, some of the photos will be on display in Hong Kong schools and local communities.