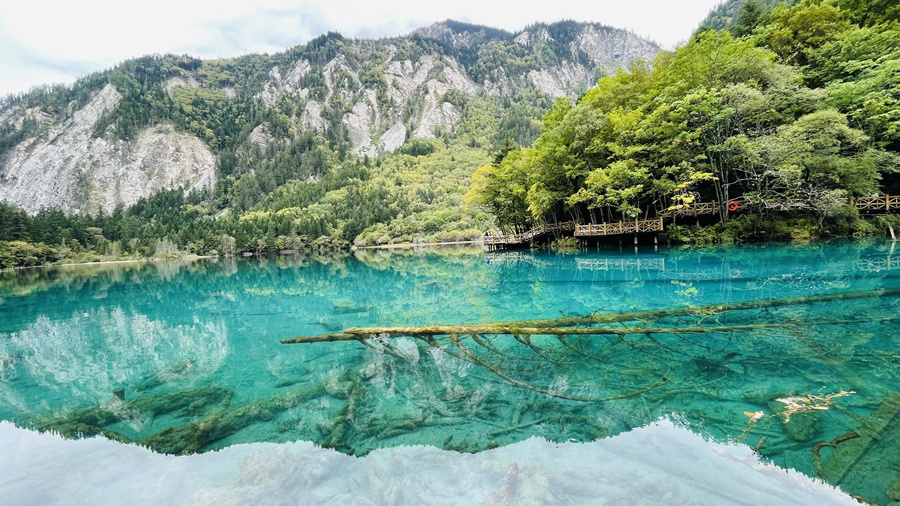 A photo taken on Sept 25 shows Five Flower Lake at Jiuzhaigou National Park in Jiuzhaigou county, Aba Tibetan and Qiang autonomous prefecture, Sichuan province. Five Flower Lake is regarded as one of the wonders of Jiuzhaigou due to its breathtaking colors, which are a result of its lake-bottom travertine and colorful algae. [Photo by Yao Jin/provided to chinadaily.com.cn]

The park’s name, which means “Nine Village Valley”, is derived from the nine Tibetan villages there. It is located in Jiuzhaigou county of the Aba Tibetan and Qiang autonomous prefecture in Sichuan province. The scenic area is best known for its fabled blue and green lakes, spectacular waterfalls, karst land forms and its unique wildlife. It was listed as a UNESCO world heritage site in 1992.

The park is also home to 3,634 species of plants and animals, including giant pandas and golden snub-nosed monkeys, winning the reputation of an “earthly paradise”.

The national park covers an area of 720 square kilometers and ranges in elevation from 1,996 to 4,764 meters above sea level.

On Aug 8, 2017, a massive 7.0-magnitude earthquake struck Jiuzhaigou county, and the scenic area was closed due to damage. After continuous reconstruction and natural recovery, the park gradually reopened to visitors starting in March 2018.

Now, after four years of recovery, the tourist destination has regained its former glamor. Tourism support facilities have also been improved to better provide services to tourists.