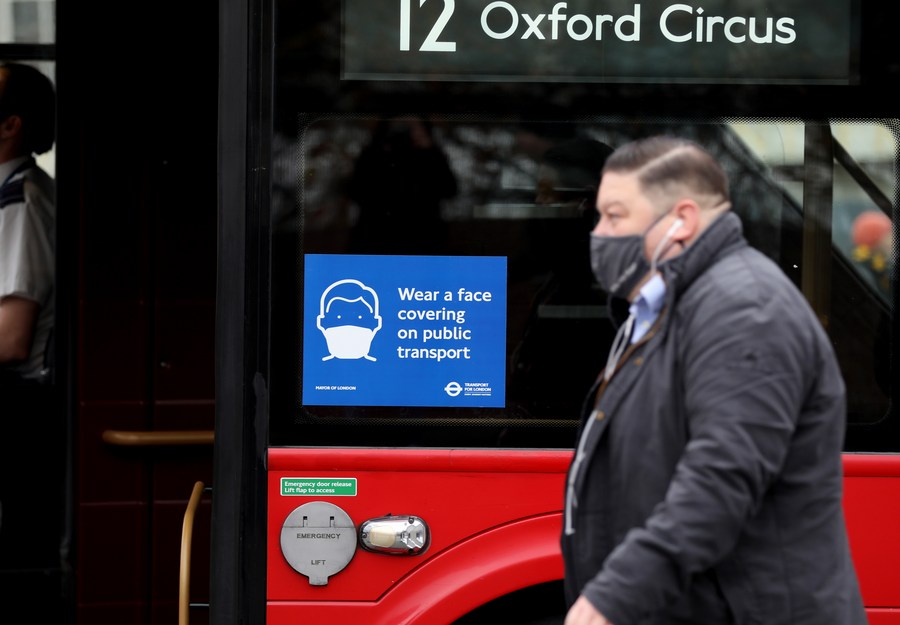 BEIJING, Nov. 29 (Xinhua) -- Omicron, a new COVID-19 variant, has been detected in a growing number of countries and regions worldwide, prompting governments to tighten their restrictions and impose new travel bans.

While the variant has sparked concerns among the public, the World Health Organization (WHO) said it is not yet clear whether Omicron is more transmissible, or causes more severe disease compared to other variants.

Two people in the Canadian capital city of Ottawa have tested positive for the highly transmissible Omicron variant of COVID-19, according to the Ontario provincial government on Sunday.

The two people had recently traveled to Nigeria.

"Ottawa Public Health is conducting case and contact management and the patients are in isolation," said a statement issued by Ontario Health Minister Christine Elliott and the province's Chief Medical Officer of Health Kieran Moore on Sunday.

The French Health Ministry reported Sunday night eight suspected Omicron COVID-19 cases among passengers who had tested positive after their African trips over the past 14 days.

The eight positive COVID-19 cases "with a negative screening for the mutations found in the other variants (Alpha, Beta, Gamma, Delta)" require further confirmation by sequencing, the French Health Ministry said in a press release, noting that it could take "several days."

In Britain, the third case of the Omicron variant has been confirmed, the UK Health Security Agency (UKHSA) confirmed Sunday.

The person tested positive after arriving in Britain, having been in South Africa, according to the UKHSA. The person is no longer in the country but the UKHSA is carrying out targeted testing at locations the person visited when the person was likely to have been infectious.

Another two cases of the new variant, detected on Saturday in Chelmsford and Nottingham, are "linked" and the two individuals are now self-isolating along with their households while further tests and contact tracing take place.

In Israel, a second case of the Omicron variant was discovered, the state-owned Kan TV news reported Sunday.

The patient is a vaccinated woman who had returned from South Africa, and was found positive in a genetic sequencing testing conducted by the Israeli Ministry of Health, Kan TV said.

The Home Front Command unit of the Israeli army has begun an epidemiological investigation to locate close contacts of the patient, while the health ministry is waiting for further results regarding additional returning travellers suspected of having contracted the new variant, it added.

On Friday, the ministry reported the first case of Omicron in Israel, which was discovered in a genomic sequencing test of a women who had returned from Malawi.

The new variant was first confirmed from a specimen collected in South Africa on Nov. 9, and first reported to the WHO on Wednesday, said the global health agency.

Other countries, including the Netherlands, Italy and Australia, have also detected cases of the variant.

To prevent a potential pandemic resurgence fuelled by the new variant, countries around the world have taken new preventive measures or tightened their existing restrictions.

France has decided, along with other European Union countries, to suspend flights from seven Southern African countries.

People will be required to wear a face mask on public transport and in shops. But people will not need to wear them in pubs and restaurants.

On Saturday night, the Israeli government decided to ban the entry of foreign nationals into the country in an attempt to stop the spread of the new variant.

The National Center for Disease Control of Libya on Sunday announced new travel restrictions due to the Omicron variant.

Travellers coming from countries where Omicron has been detected are requested to bring a negative PCR test taken within 48 hours, and also to remain in quarantine for 10 days, the center said.

It also recommended Libyans not to travel to countries where the new variant has been detected.

Palestine on Sunday extended its coronavirus-related state of emergency for another month to combat the spread of the new COVID-19 variant known as Omicron in the Palestinian territories.

In a decree issued by Palestinian President Mahmoud Abbas, the state of emergency was extended immediately, according to the official Palestinian news agency WAFA.

Also on Sunday, Jordan announced travelers from South Africa, Lesotho, Zimbabwe, Mozambique, Namibia, Eswatini, and Botswana are banned from entry into the country.

Jordanian citizens and their immediate family arriving from those countries are allowed to travel to Jordan through Queen Alia International Airport only and after following certain procedures.

Jordanian passengers will need to have a PCR test at Queen Alia International Airport upon arrival, sign a quarantine pledge and pay in advance for the cost of institutional quarantine for 14 days.

The WHO said Sunday it's not yet clear whether Omicron is more easily spread from person to person compared to other variants, even though the number of people testing positive has risen in South Africa, where this variant is present.

It's also not yet clear whether Omicron causes more severe disease, but preliminary data suggest that there are increasing rates of hospitalization in South Africa, which however may be due to increasing overall numbers of people becoming infected.

The WHO confirmed that there is currently no information to suggest that symptoms associated with Omicron are different from those caused by other variants, as understanding the level of severity of the Omicron variant will take days to several weeks.

All variants of COVID-19, including the Delta variant that is currently dominant worldwide, can cause severe disease or death, in particular for the most vulnerable, and thus prevention is always key.

However, the WHO said preliminary evidence suggests there may be an increased risk of reinfection with Omicron, but information is limited. More information on this will become available in the coming days and weeks.

It added that current PCR tests continue to detect Omicron, while further studies are still going on to understand how the Omicron variant will impact available vaccines and treatments for COVID-19.

The WHO classified on Friday the latest variant B.1.1.529 of SARS-CoV-2 virus, now with the name Omicron, as a "Variant of Concern" (VOC).

According to the WHO's definition, a VOC, with a degree of global public health significance, demonstrates one or more mutational changes, such as an increase in transmissibility or detrimental change in COVID-19 epidemiology, increase in virulence or change in clinical disease presentation, and decrease in effectiveness of public health and social measures or available diagnostics, vaccines, or therapeutics.

The WHO has since called on countries to enhance surveillance and sequencing on circulating SARS-CoV-2 variants, submit complete genome sequences and metadata to a publicly available database, and report initial VOC cases or clusters to the WHO.

It has also recommended field investigations and laboratory assessments to better understand potential impacts of the VOC on COVID-19 epidemiology, the effectiveness of public health and social measures and antibody neutralization. Enditem