William A. Owens: China and U.S. should work closer in cyberspace

Q: Could you emphasize your speech?

A: So I think the single most important thing what I was trying to say is that in this very complex world where is very dangerous, many challenges, including cyber security and cyber-attack, that we need as nations, China and the United State needs to work closer and closer. We are the two most advanced nations I think in cyber. You have many great companies doing cyber work as very smart phones， very smart universities. There are many things that are going on in China and the United States where we need to be together, and we are not together enough. So that is my, that’s the principle thought I would have is that we need to find leadership in the United States and China at all levels to be together to talk substantively. Not just about definitions，not just about what the subject is, but to talk about real solutions for the long term. And those solutions tend to be very complex and they are changing more rapidly. And so many of the people in the conference seem to be talking about today’s technology. And the future is about future opportunities. Those future technologies will only come I believe from the United States and China, and we need to work closer.

Q: In what ways China and America can cooperate?

Q: After you retired from the military, what makes you focus on cyber security?

A: After I retired from the military, in the United States we can go into business, so I was in business. I was the CEO of a very large company that used to do business here in China called Nortel. Nortel Networks was part of China’s growth. I’ve signed 20 public boards, many of them associated with internet technology and other technologies. And my partner and I today have a company called Red Bison. It’s focus on the United States and China. Red Bison, bison is an animal from my home stage that brings partnership to these two countries. So that company does consulting work and very high tech work in several different industries.

Q：The theme of this conference is “Of all things, human is the measure.” How do you define it?

A: Well I think we are moving into a new world where the machines, the software, all of the things of internet things, machine learning, machine to machine, the internet of… everything is going to resolved in a great opportunity for people to make their lives better. There is a great book that is written called abundance which says, and I believe this is true, that many the major problems of our lives will be solve by these very smart machines, poverty, terrorism, even getting people together as people, will be solved in some sense by this very smart world, but what is not solved is what we are going to do. Who’s going to lead us in this new world? Who’s going to lead these machines? Who’s going to organize the machines and make them come together？ And it’s called leadership. So we need to seek the great leadership. And one of the things I worried about in your country in mind is that we have these wonderful young people who are very focus on technologies and how they are gonna make money whether, and how they are going to do great things. We don’t focus on how we get together as leaders to make the difference in the world. Are we going to make a difference by consolidating those technologies and making a difference?

Q：There’s a view that some giant internet company have the big data, and this will challenge the sovereignty, what’s your opinion?

A: It’s a very difficult challenge of course. There are many ways you can take down the power distribution of the world. It is not just the Internet. In your country and in ours, only a few very large transformer sections. If we blow those up, you won’t have power in your power grid in many many cities in this country. And it’s the same in the United States. We can do an EMI blast with a big weapon.

It doesn’t have to be a nuclear weapon. It can be a big conventional weapon and blow up your power grid across many large cities. There’s many ways to do this. And there’s internet. So we can do this with the internet. And I’m sure your country’s military and your national security people think that, how that could be done and develop that capability. The United States I’m sure does although I don’t have clearances anymore. But I’m sure we know how to do that kind of thing with cyber.

Well you can do that kind of thing with cyber world. You can certainly get into it. But there are easier ways to make that happen, you know, or take down the internet which is easier than just hacking it. So we need to be working together as friends and colleagues to resolve the issues because we both very smart.

China is very smart, the United States is very smart. We know a lot about this. And we need to talk together and become friends because we can’t. We were great friends at the end of the World War II. You can only go to the ？ to see the great memorials to the American Chinese friendship. We need to reestablish that to find new future together. Two very smart counties come together to help the world. So thank you very much. Nice talking to you. 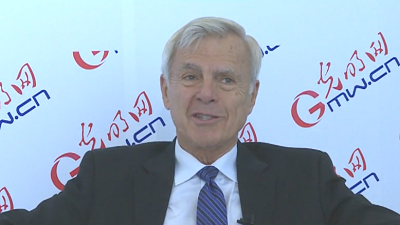