Andreas Laimböck: A Beijinger from Austria

My name is Andreas Laimböck I am from Austria, and now live in Beijing  I first came to Beijing in 2002.

I couldn’t speak any Chinese when I first came to Beijing I couldn't even say “thank you” in Chinese I spent my first year in Beijing studying  Then I worked in Beijing for a while.After that we started the LTL mandarin school, and began to teach others Chinese.

What I do now. Is a bit like helping myself of 20 years ago. It’s really an interesting thing . And it is satisfying to me ,I like doing it.

In fact, before I came to China, I didn't know anything about the country. Then after I had come here, I realized. I never had thought some people could be so different.

In Europe, we prefer to be straightforward.  But in China, if you talk directly to people about something.The Chinese may say that’s a little bit rude.It’s a difficult part for me.Or, we all like to bask in the sun. We like to get tanned the deeper the tan, the more beautiful. Chinese people especially like white skin.It always makes me feel weird. I lived in Beijing when I first came to China. Maybe the character of northerners suits me better I like the atmosphere in Beijing. Beijing is more international than before .But my favorite thing about Beijing is that it is working hard to protect Chinese culture .So in Beijing you can still feel. You are in China.

Beijingers are enthusiastic and hospitable and they you are considerate. Yes, they take care of foreigners .But, when you talk to Beijingers, there are some things you need to know. You have to think about everybody's self-esteem. You need to show due respect for their feelings. You need to be polite.You can’t make them feel embarrassed. Beijingers are actually similar to Austrians, they like to drink beer, eat lamb kebabs, and chat 差不多。 Very similar. Honestly, it’s about the same here and in Austria .We do, too . We also like to eat some meat, drink some beer, and chat after work.It’s relaxing with friends .Actually it’s very much the same . As for me the best part of Beijing is Beijingers it’s a buddy feeling making me feel at home. I really like Beijing. 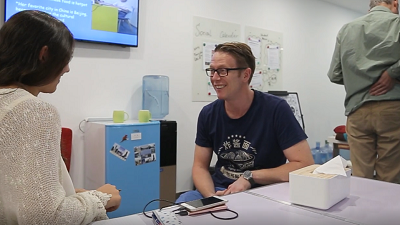