Hello to all, I’m Jean-Jacquesde Dardel, in Chinese Dai Shangxian

I am the ambassador of Switzerland to China, Mongolia and DPRK.

It is actually the largest Swiss embassy in the world, which is a tribute to the size the importance of China

If you ask me to describe Beijing in one word

I may go to the word Beijing is a “central”

Beijing is a throbbing hub that moves and constantly reinvents itself.

It’s also historical and has the whole substance of China

Its history gives it meaning and substance, and it’s also absolutely unavoidable.

There is history, there is power, there is a lot of economy and a lot of developing high-tech, cutting edge sectors of human activity around Beijing.

You can not understand China if you don’t know Beijing.

What first strikes a western group of people visiting China for the first time is the modernism, the contemporary skyline, the beauty of many well-developed cities and this goes for Beijing too.

So more and more companies are attracted by the human resources

There will be more and more such opportunities for start-ups for high-tech enterprises.

We have around a thousand Swiss companies established in China, and signing up to the Swiss - Chinese Chamber of Commerce

And here in Beijing it’s slightly over one hundred

When you need to know more about regulations, when you need to explain how regulations should adapt to the realities of the products that are being imported or sold or produced in China. Beijing is not only a city of government, it’s also a very thriving, high-tech and science and research and development, and nowadays artificial intelligence hub.

So I don’t doubt more and more such companies wanting to come to China and to establish bases in Beijing.

The economic development of Beijing is such that yes of course. And this is not in a good location for mass production or having industries perhaps.

It can be and should be improved because we never finish improving that kind of environment I’m a strong believer in openness. I believe this is the path that has been chosen by and for China.

As China hastens the pace of openness, it will reap added benefits quite quickly.

It has many different aspects which are to be discovered.

I feel myself absolutely at home here. I feel like a Beijinger.

So I sensed possible friendship, and I like that very much, and that attract me back to Beijing a number of times. 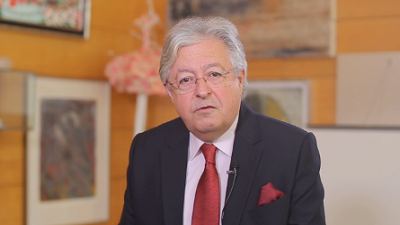