My name is Andrey Kirillov. Since 1998, I have been head of ITAR-TASS’s Beijing bureau. In the recent 20 years, I didn’t leave Beijing except when I was on vacation.I would say I’m a half-Beijinger.When I first came here, many Beijingers provided me with a lot of support and help. They treated me very well. They were very friendly.In 1986, I first came to China. At that time, few people spoke foreign languages in Beijing. When most Beijingers talked to me at first,they felt very strange that a foreigner could speak Chinese.I said to them that it was very normal and many people could speak Chinese in Russia.Beijing has made great progress, so do Beijing people. Beijingers have already got used to foreigners speaking Chinese.It no longer seems like a big deal.Nowadays, many people in Beijing, especially college graduates even middle-school students, can speak English. If you go to Yabao Road, many Chinese businesspeople there can speak Russian, some pretty well. Therefore, Russians coming to Beijing from Russia don’t have to worry too much about language problems there.The most important thing is that Beijing is now an inclusive city. More Beijing people are very friendly to foreigners, and this shows the inclusiveness of the city. I love Beijing. I have lived in Beijing so long. I feel happy.Beijing is my second hometown. I hope that I can work longer in China, in Beijing. I love China. I love Beijing. I wish all Chinese, I wish Beijingers, all the best and good health. 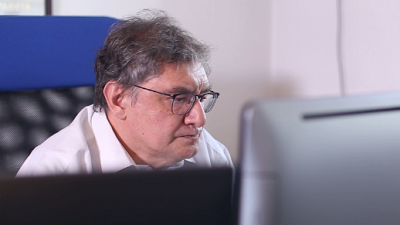