My name is Leandro Rolon, I am the CEO of 3D Food Company. I’m America born from New York. I’ve been in Beijing for about 7 years .My first impression of this city, I was quite overwhelmed, it was a very big city. But I was very impressed by the sort of historical background: coming from a city like New York, we have some history, coming to Beijing is just like a whole different world. I think one of the things that I realize as I’ve been here is I’ve learned to understand sort of the new generations. Here in Beijing and China in general. You begin to see sort of respect for the old, but also this very sort of enthusiastic view of the future. So you have this kind of layer of time, which I think is very unique to any contemporary city, very special, and very uniquely special to Beijing. I think the main change that I’ve seen occur here is you have this very healthy mixture of culture. But you have this very interesting sort of aspect which is technology and technological skill mix with financial, and so all of these combined really kind of support a very, I think, great base for entrepreneurs. You see amazing companies like really big tech firms, not only becoming big in Beijing but becoming big in China and taking over I think many different companies across the world. And this has happened in a course of 3 to 5 years which I think is incredible feat.First of all I think there still are many products made in China. But I think what I realize now is that China has developed amazing tools. And the tools have become sort of, really, a foundation for creating new types of products. And this has tremendous impact on the environment with the people around the city. You can see this in things like transportation and finance, especially in the new kind of 4.0 industry and 3.0 industry. Original I came to Beijing actually to practice architecture, which is my career. So originally I came here to really work on some really amazing projects, big, you know, structures and things like this. But after about three years being here, I began to learn about the sort of opportunities, behind sort of, opportunities for entrepreneurs such as myself. And we thought there was a really exciting opportunity to be able to introduce a technology like 3D printing, which is so new. So 3D food printing is one of these technologies that really has a potential to disrupt the entire food industry. Not just in Beijing, not just in China, but really globally. We believe that as human beings become more health conscious.Here we are with one of our new offerings. This is a 3D food printer that you see in front of us. This is a machine that we’ve been developing for about a year and half now. As you will see right in front of you what’s happening is actually we’re 3D printing, in this case mashed potatoes. All the parts all the software all the hardware were we developed here in our studio here in Beijing .There are still rooms to be made and there are still a lot of innovations that need to happen here. The nice thing is that we can already take this machine, and put this in kitchens around in Beijing.So for us the future of, future smart breakfast might be happening just from your phone to your printer at home. So we think this is really one of the most exciting areas of this technology. I love Beijing.Many wishes and greetings to everyone in Beijing. We love you very much in 3D Food Company. 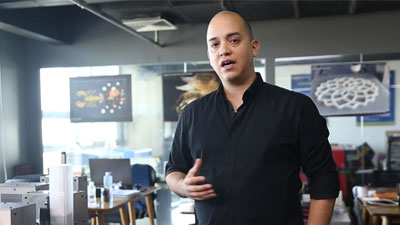