Claudia Masueger: Beijing reflects in a glass of wine

Hi.I’m Claudia Masueger. I’m from Switzerland. I’m running a wine retail chain called Cheers Wines. I arrived at China on the 8th of January. And when I looked at the market, only the government or the elite of business people were consuming wine. The end consumer, the young generation didn’t drink wine at this time. The first store we opened in April, 2011, because the store was opened in a very local Chinese neighborhood in Xizhimen.And people who consumed wine were randomly people from the street.Wine consumption in the last ten years completely changed, the wine prices have dropped extremely.Wine consumption, wine price was more transparent.Therefore, the consumers could finally afford.Now it’s the young people, it’s the mass of the people, on the streets.In 2017, everything changed, because Beijing was renovating itself. A lot of street stores were closing in Beijing. A lot of new shopping malls opened.So we managed to move our projects, our stores from the street into the shopping malls. In the last couple of years, the interest of the young people became more and more to learn about new lifestyles. The targeted group has a different consumption habit. So shopping malls is not only for shopping, but rather for entertainment, the people are excited to experiment, excited to try new wines. And then they order online. And the delivery in China today is so fast that within twenty minutes we have to deliver,they have discovered wine as a lifestyle. And they love it, and they drink it on the daily basis. I love living in Beijing. I love you all. And I wish you all the best. 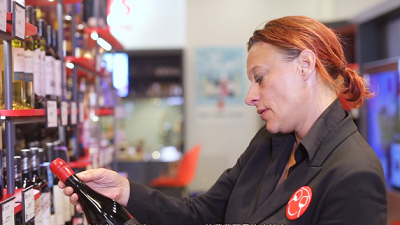