My name is Colin Siyuan Chinnery, I am British.I'm an artist by profession， and currently working on a project called "Sound Museum."

The first time I came to stay in Beijing was in 1979, when I was only eight years old. I came to Beijing with my parents, my mother is Chinese,my father is British, he is also a Sinologist . The old house of my family is in the Shijia Hutong, and now it has become the Shijia Hutong Museum .I was a member of the advisory group during the planning of the museum.

I think the theme of old Beijing is particularly interesting when it comes to sounds. I began to think about the relationship between sounds and and old Beijing, as well as sounds relations with time with history, and culture, using sounds to record the history of Beijing looking at our present and past from new perspectives I invited some British experimental musicians to experience the sound environment in Beijing.They said they had never experienced such a good sound environment. They felt the sound environment in Beijing is the most interesting in the world .I took them to places like the Central Business District.They would feel Beijing is the same as the rest of the world . I took them to the Tiantan Park and the Tianqiao Market, they were very inspired.They have experienced no such sound environment in western countries.After the 1980s, the changes in Beijing have been very rapid .Cars have gradually replaced bicycles .A large number of wheels, chains and bells of bicycles used to form a huge theater of sounds . Beijingers are particularly obsessed with sounds, which is characteristic of the traditional culture of Beijing.Only Beijingers will put a whistle on the back of pigeons and set them flying . The pedlary in Beijing is the most colorful, and has the strongest sense of rhythm .You know what he sells from a long distance, so you are ready to go out and buy .After reform and opening up began, the melodies of traditional pedlary is gradually gone .By the 1990s, only non-local vendors were still peddling . That past culture of peddling was gone.I am now concentrating on a project of disappearing sounds, and many Beijing traditional customs are still in existence. For example, pigeon whistle. And there are a variety of things to play with in the parks. The two most common sounds in Beijing are those of pigeon whistles in the sky and camel bells on the ground. Each recording is a peculiar challenge for me .I have a very special emotional attachment to Beijing. I think Beijing is a very energetic city of boundless possibilities . I wish this city continues to be sonsy and continues to be blessed. 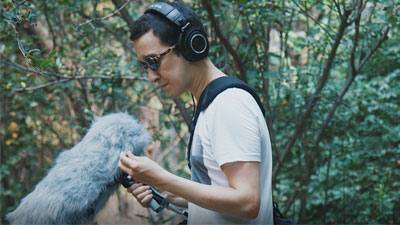