Hi, everyone. My name is Martin Douglas.I’m from San Francisco, the United States. I came to Beijing in 2003.In Beijing, I’m a jazz guitar player. I work with several jazz bands in Beijing.I also work at Eastman Guitars Company every week.

I first came to Beijing to study Chinese language at Peking University, in Haidian District. Beijing was especially interesting to me at that time.Because Beijing is an ancient city,you can see both traditional Chinese culture and history in Beijing.

I like old Beijing’s culture very much.Before I came to Beijing, I had never listened to Chinese folk music.Such as live music played with traditional Chinese musical instruments like Erhu, Guqin, Zheng and Ruan. So when I came to Beijing, I watched such performance for the first time. It was very impressive. I’ve always been thinking about ways to combine the folk music with western jazz. China develops very fast, especially in Beijing. Now more and more young Chinese like foreign culture. The audience of our jazz performances were mostly foreigners in Beijing before. But now only half are foreigners. We have a growing Chinese audience.

Over ten years ago, we played jazz basically at coffee shops or small bars.But now there are more and more jazz clubs in Beijing. For instance, Blue Note.I had never even thought that China would have a Blue Note,and it is located near the Tiananmen Square.

Honestly, I think pace of life is particularly fast in Beijing,people are also feeling increasing pressures here.Therefore, practicing Tai-chi and Qigong will help people relax. I think all people who live in a city with such a fast pace of life can practice Tai-chi, which could be helpful. Sometimes you should slow down and relax.

My teacher is a master of Tai-chi and Baji (another school of traditional Chinese boxing). Improvisation is part of playing jazz.You need to be relaxed so as to improvise.The same is true with Tai-chi.  You need to “hear” to your opponent’s movement. 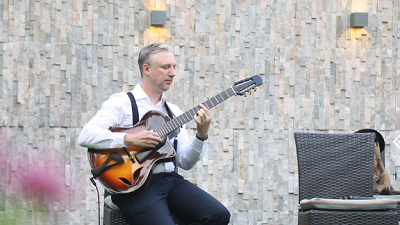