Arnaud Pambou is Cultural Counsellor of the Gabonese Embassy in China.He first came to China in 2000,and has studied and worked in Beijing for over one decade.

I first came to Beijing in October 2000.And I joined the (Gabonese) embassy in December 2011 as Cultural Counsellor.I have been living in China for over ten years.

Beijing has well-developed transportation. Many countries, including Gabon, should learn from Beijing.

When I first came to Beijing, there were only three subway lines. By now, there are about 22 lines. So I feel that the change is huge.

On October 1, 1969, Beijing’s first subway line went into operation.From one to four, Beijing waited for 38 long years (from 1969 to 2007). Before the opening ceremony of the 2018 Beijing Olympic Games,the first stage of Line 10, Airport Express and Olympic Line (first stage of Line 8) began trial run.

I would say the biggest event I have participated in was the 2008 Beijing Olympic Games.

I love sports, especially football.I was assigned to serve the Gabonese Olympic delegation. I was so proud.I’m very grateful for China providing me the opportunity to serve as an Olympic volunteer.

After Beijing Olympic Games, Pambou stayed in Beijing and witnessed its development. After the Olympic Games, it took Beijing only 10 years to expand its subway system from four lines to 22, with a total length of 608 kilometers covering 11 municipal districts.

Now, Pambou works and lives in Beijing. He is profoundly attached to Beijing.

We have a club. Its members are all African diplomats. We play football every Saturday. In our spare time, we visit many beautiful places with families in Beijing.

Beijing is the capital. So it also has some problems like other old cities. As we know, riding bikes is good for environmental protection. I support developing bike-sharing. But there is a problem: those bikes are parked disorderly. That’s the only problem.

I often joke with my friends that I’m a half-Beijinger.Once I went back to Gabon for a two-month vacation,upon returning to Beijing, I told my father, “I’m going home.” He was shocked, “Where is your home?” I said, “China.” 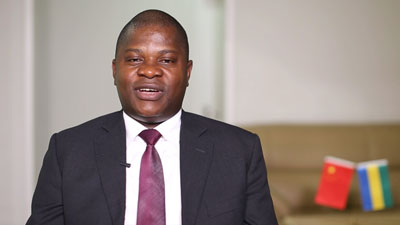