My name's Geoff Raby, I'm Australian，I came here as the Australian ambassador to China at the beginning of 2007. And when my posting finished in the end of 2011, I decided that I would make Beijing my home.  In the 1950s or 1960s, Australians would often make London their home if they lived overseas, and then in the eighties and nineties, the first choice was usually New York , but I said that now with the change in the world, the weight of economic power that's moved decisively to East Asia, particularly China, an Australian living abroad should live in either Beijing or Shanghai, I was very comfortable in Beijing.Having ah come here first in 1986, I was first secretary economic.So Beijing in those days was obviously very very different than it is today. Of course for the local Chinese, Beijing was a very poor place and the conditions were hard, there were very few cars, we all had push bikes, Flying Pigeons or Phoenixes, which were luxury items for the local Chinese in those days.When I came back in 2007, the city had changed dramatically, the thing that really struck me was just how much wealthier people were, how much Beijing offered. And a big part of my life is with the art community.In the 1980s, there really wasn't an art scene in China. There were no private galleries,this is quite extraordinary until 1991 that the first contemporary art gallery opened in Beijing, and that was the first contemporary art gallery in all of China. So I began collecting，I bought my first painting in 1986.I still have it, and I've been buying art for 32 years.I now have a studio out in one of the art district is called何各庄.I felt through art you could demonstrate to people who were unfamiliar with China, the incredible creative potential of the country.Like any developing country, China has been through a period of imitation and copying its normal with Japan, South Korea, Singapore. So the art has built a very strong connection between Australia and China, and of course it's not just Australia and China,similar stories can be told now between China and the United States, China and Europe.I think there are extremely important for helping peoples in different countries understand each other.Coming back to Beijing itself, one of the biggest challenges of being an ambassador is to help your home country and your home government stay across the contemporary reality of modern China.No one in history has seen a country transform itself as rapidly as China, and I've had the opportunity of moving here in Beijing through much of that transformation. So I understand it in a way that very few people outside of China really do and when I was the ambassador it was a big challenge for people to understand what was going on,and particularly the period I was here starting in the mid 2000s, change accelerated in a way we had never expected and continued to do so. Beijing is the best example of how much China has changed,and it's one of the things I want to say to people, you have to come to Beijing to experience China in its contemporary reality. Beijing welcomes me and that's how I feel about Beijing. 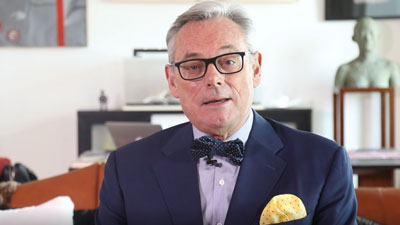