My Chinese name is Lei Wenting. A Chinese friend gave me this name. The same surname as Lei Feng. My Turkish name is Levent.  I’m a Turk. I first came to China after the Christmas Day in 2002.

I came here as a journalist .But actually I studied arts and cinema .I have already lived around this area for more than 10 years, before I was in Haidian.  I have two important places, one is 798艺术街, and another is Maliandao. Tea culture is one of the first cultures I can say that I guess that culture has been running here for until now 4700 years. And I have been here 15 years, and I thought that really this culture has to be exported to the out(side) world, to everywhere, because it is a very very nice culture.  But because of strong influences of the western cultures that are coming here fast and people are you know too much admired  I saw so many Chinese people, they don’t prefer tea house, they prefer mostly foreigner coffees. That’s the reason Laoshe Tea House，at Qianmen, you know the father is really persist to keep this tea culture than against foreigner coffee culture, because more nice more healthy, everything is better than coffee culture. This culture is belongs to here. This culture have to keep itself, as other culture has to keep itself too. China’s people have to try to find that balance. China is open the eyes， and people can see that one. There is not too much as before tea house, but still there are some nice places as 798. Therefore, I think 798 Art District is really good. I usually go there.

798 is a very important place for to promote itself to the abroad，not just the inner culture，even the abroad. I can see more foreigners are coming here and ask the tea. Because they know mostly coffee culture. But coffee culture is not healthy. I didn’t see that so much than I was here 15 years ago. This is one of the big differences. About tea culture they have just informed about 绿茶. But it’s not just green tea. So behind of that are more than six or even seven mainly but behind there are 2000 different types of tea. In my country we know just English Black Tea, But now we started to produce Green Tea，and even White Tea.People don’t know what Pu’er tea is. But I saw some in western countries’ people they started to heard already what is Pu’er tea. So for the moment maybe less tea houses, but already tea culture is going to abroad. 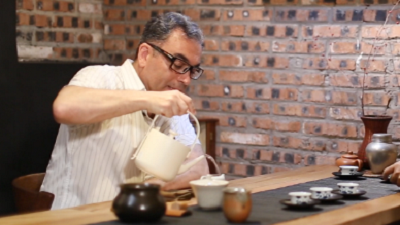