My name is Dan Sandoval, I’m a photographer from the U.S.. I have been working as a photographer since 2002 when I got my first job working on a newspaper. I moved to China in 2008. I have been living in China for about 10 years now and in Beijing for 3 years. The first time I came to Beijing was in 2009. One of the first major changes that happened in Beijing from the first time I thought of coming here. It’s making the city a bit more beautiful, it’s making it more modern.  Communities, have completely changed the dynamic, where some communities used to be quiet little hutong-neighborhoods.You now have very busy commercial streets. Where you have busy commercial streets in the hutongs before, now they are back to being residential neighborhoods. So the dynamic changed quite a bit. In terms of the visuals of the city, you’ve got new buildings coming up on the horizon all the time. One of the main reasons that I’m in Beijing and staying here actually, a big part of it is its international community. It makes it, first of all, for my career, much more viable. Like you get very good Chinese clients.I’m not the person that came to China only spoke to other foreigners. I leant it mostly by talking to people, taxi drivers on my way into the city or back home. There are a few Chinese concepts that I think very interesting. One of them that has no really direct translation is “Ma Fan”. Because “Ma Fan” doesn’t translate into English very well. It can mean so many things. That’s a great phrase. I found myself using it in English often and also. I would say, “Oh, it’s just too much Ma Fan, I don’t want to deal with it.” But of course, you got things that are quite ingrained in Chinese societies, like “Yuan Fen”. The idea of Yuan Fen is very like “if it happens, it happens. If it doesn’t, it doesn’t.” It’s Yuan Fen. These are little phrases that I quite like in Chinese. Now I’m here in Beijing.And I’ve started to put down roots here in Beijing. So once I found a place and I really like it, I make it feel like home. Because if I’m gonna traveled as much as I do, when I come back to a place, I really want to feel like at home, no matter where it is. So the more you make a place feel like home,the harder you move away from that place also. but when I think of home, I think of here in Beijing. I’m an American photographer. I live in Beijing. I really love Beijing. I really love China. All the best to Beijng. 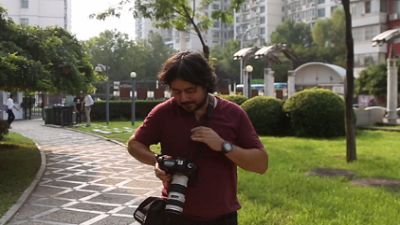