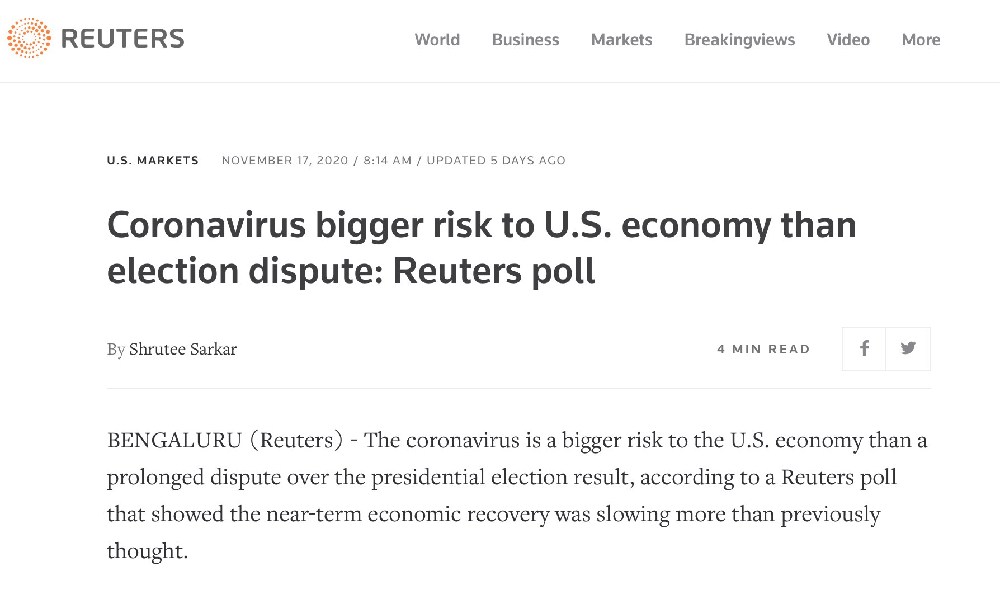 Reuters reported on Nov. 17 that a poll by Reuters showed that the COVID-19 was a bigger risk to the economy of the U.S. than its presidential election dispute. It also said U.S. economy recovered more slowly than previously thought in recent time.

After a poll of more than 100 economists from Nov. 10 to 16, Reuters found that the United States has become the “hardest-hit” country due to about 11 million confirmed cases of COVID-19 in the country.

As for the impact of the coronavirus, Reuters said that over 90% of economists believed that “elevated coronavirus cases were the bigger risk to the economy for the remainder of this year rather than further uncertainty surrounding when the election results will be made official.”

Reuters also quoted words of David Mericle, chief U.S. economist at Goldman Sachs, saying, “Fiscal support has largely dried up for now, leaving disposable income lower in the final months of the year. But the largest risk is that the third wave of the coronavirus is likely to worsen with colder temperatures.” Speaking of the U.S. economic growth, Reuters said that “it’s been whiplash for the economy this year, plunging into the deepest contraction in at least seven decades of 31.4% in the second quarter to the fastest-ever expected growth of 33.1% last quarter.”