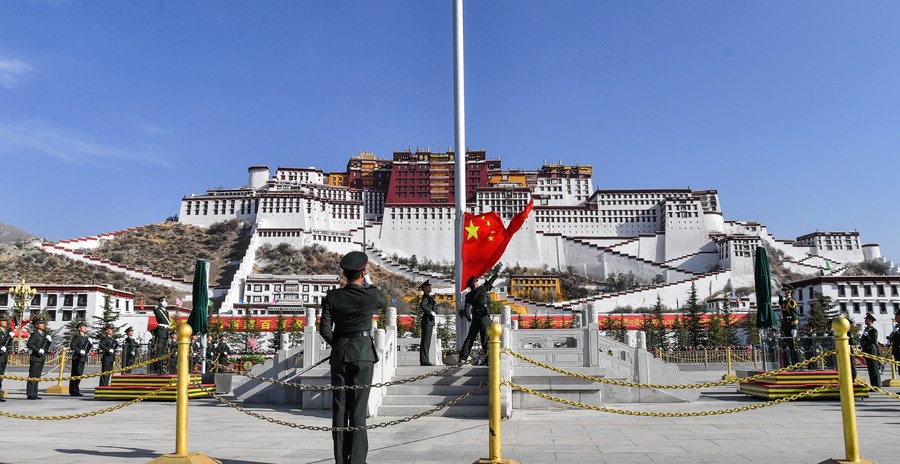 A flag-raising ceremony is held to celebrate the Serfs' Emancipation Day at the square in front of the Potala Palace in Lhasa, capital of southwest China's Tibet Autonomous Region, March 28, 2021. (Xinhua/Jigme Dorge)

BEIJING, May 23 (Xinhua) -- Sunday marks the 70th anniversary of the peaceful liberation of Tibet. President Xi Jinping, also general secretary of the Communist Party of China (CPC) Central Committee and chairman of the Central Military Commission, has attached great importance to the development of Tibet Autonomous Region.

The following are some highlights of his quotes in this respect:

-- Efforts must be made to build a new modern socialist Tibet that is united, prosperous, culturally advanced, harmonious and beautiful.

-- The CPC leadership, the system of socialism with Chinese characteristics and the system of regional ethnic autonomy must be upheld to carry out work related to Tibet.

-- We must make improving people's livelihood and rallying public support the starting point and ultimate goal in the economic and social development.

-- More education and guidance should be provided for the public to mobilize their participation in combating separatist activities, thus forging an ironclad shield to safeguard stability.

-- Tibetan Buddhism should be guided in adapting to the socialist society and should be developed in the Chinese context.