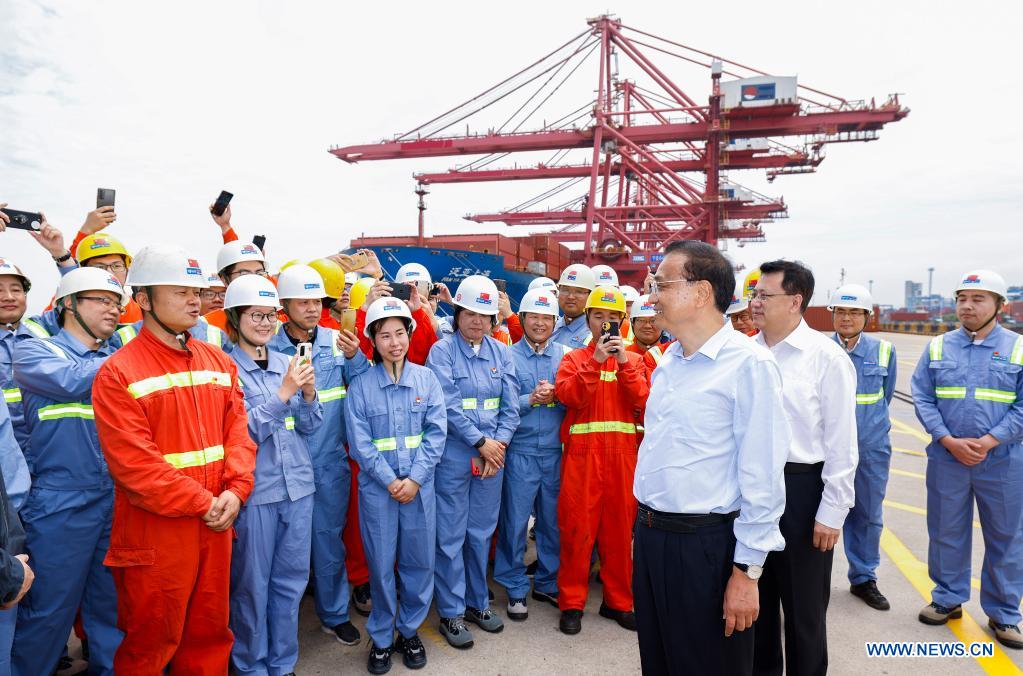 Chinese Premier Li Keqiang, also a member of the Standing Committee of the Political Bureau of the Communist Party of China Central Committee, inspects the Ningbo-Zhoushan port, a major transit area for bulk commodities in China, in Ningbo City, east China's Zhejiang Province, May 24, 2021. Li made an inspection tour to the city of Ningbo in east China's Zhejiang Province from Monday to Tuesday. (Xinhua/Huang Jingwen)

Li, also a member of the Standing Committee of the Political Bureau of the Communist Party of China Central Committee, made the remarks during his inspection tour to the city of Ningbo in east China's Zhejiang Province from Monday to Tuesday.

When inspecting the Ningbo-Zhoushan port, a major transit area for bulk commodities in China, Li called for paying close attention to the cyclical changes in the world economy and commodity price fluctuations in the international market.

China should expand opening-up, further promote the facilitation of customs clearance and conduct free and fair trade, he said, adding that the country should give full play to the advantages of the port and use market-oriented methods to improve the import, storage and trading of bulk commodities.

Li spoke with managers of several manufacturing enterprises to learn about the impact that upstream price changes in raw materials had had on their businesses.

He said that rising commodity prices would not only bring excessive pressure to large and medium-sized manufacturing enterprises but also affect the small, micro and individual businesses, adding that consumption activities downstream would also be affected.

Li called for making good use of policies, such as tax and fee cuts and inclusive financing, to support market entities, and ramping up market regulation to slow down the transmission of rising costs to the downstream sectors.

Enterprises should also pay attention to tapping into their potentials and drawing on innovation to relieve cost pressures and improve competitiveness.

During his visit to a government service center in the city, Li stressed that the country should relieve the pressure on enterprises, continue improving its business environment, and create a fairer market for competition.

He also inspected a talent resource market to learn about the local employment situation. While visiting a local company, he encouraged it to develop more new products enjoyed by consumers.