Thanks to the recently unveiled census data from 2020, I've learned that I'm one of less than a million foreign residents who have spent the Covid year inside China. My assumption is that a lot more foreigners usually reside in China, when there are no travel and visa restrictions, but adding my being foreigner, I'm not just a fluent speaker, but also can read and write in Chinese. There is data indicating that more and more people in the West, in Asia, and in Africa are starting to learn Chinese, but I still consider myself a very small minority. Why did I start to learn Chinese, and how have I kept going all the way to my current level? This is my self-introduction:

My first interest in China dates back to my undergraduate time around 2005: I remember clearly the small park in my hometown in Switzerland, where a small group of Swiss made use of the good weather to practice Tai Ji outdoors. I had never seen anything like it, but instantly felt that this was healthy, beautiful, and just what I needed. I've started practicing soon after, including some Gong Fu lessons, but it doesn't end there. Majoring in economics, I had a certain feeling that China might be on a good trajectory just by looking at some numbers, even though very little was reported in local newspapers about China at the time. Still, it felt like something worth exploring further, though I had absolutely no idea, how. Another aspect of economics, besides giving learners a feeling for numbers, is the fact that it's extremely abstract and dry – especially in the early 2000's when behavioral economics was rare and the "homo economicus" was still the predominant model of neoclassic theory. Put it in layman's terms: it was insanely boring, sterile, and very far from how one instinctively felt that humans work in reality.

So, I decided I would want to learn something unrelated to statistics, something irrational, something inspiring. I have always felt comfortable learning languages, and as a Swiss had learned French and English in high school, besides German and Swiss German, plus some Spanish classes I had taken during an exchange year in Florida, USA. If I was going to learn another language it would have to be a challenge, and it would not be one of the Indo-Germanic language family. Given that I was a politically active youth in a diverse network of socialists, anarchists, communists and syndicalists, Chinese had yet another attraction: the largest remaining socialist country.

That's how I started to learn Chinese and I have never regretted it. Luckily I decided early on, I would rather learn slowly but thoroughly, taking the time to learn Chinese characters from the start. If you take away just one thing from this column, let it be this advice: If you learn Chinese, do make the effort to learn Chinese writing. It's the only way to get far, to go beyond daily small talk, to learn about Chinese culture, and it's simply beautiful, inspiring, amazing, and surprising, especially the moment when you go from deciphering single complicated characters, into feeling you start to read sentences, and suddenly it's like the text starts talking to you.

From learning Chinese to going to China, it took me about a year, and after graduation the moment finally came, when I took a ship from Japan to Shanghai, two days on the sea, realizing I hadn't even booked a hotel in Shanghai, having prepared really nothing except time and a positive spirit. I met a French female ship engineer and a Dutch volunteer who had helped reconstruct a ship like the one used by Magellan and joined on leg of its journey around the world, when it came to East Asia. They told me how internet coffee is spelled in Chinese, unbelievably this was before smartphones were common and going online meant going to smoky, often dark and dirty places where many Chinese went for spending whole nights on video games. I found a hostel, I stayed a few days in Shanghai, and was blown away by the size, the speed, the noise, and the beauty of the wide streets, super modern skyscrapers, blue skies with white clouds, and the red flag with yellow stars in front of it. I really fell in love with China at that moment, although I still knew almost nothing about this country.

I then took a green night train to the city of Kunming in the Southwestern province Yunnan, which was a 45h train ride, and in a mix of saving money and searching adventure, I chose to buy a hard seat ticket, rather than a sleeper carriage. During those 45h the lights were never turned off, people came and left, many were amazed and surprised at seeing a foreigner in this 4th class wagon, or seeing a foreigner at all. My one year of Chinese lessons didn't bring me very far, but it was enough for people to try to communicate with me. Deepest impressions are how the whole carriage would look at me, how one group taught me a version of the card game "bridge" to kill a few hours, how one can sleep with the head on the small table while sitting with glaring lights on, how they spat sunflower seed skins and cigarette buds on the floor (nowadays smoking is prohibited on all trains and strictly enforced, but it was a different world back then), how they would come with a broom every couple of hours to sweep the garbage out of the carriage, how a nose-flute player entered somewhere close to Kunming and I didn't know how much money to give him, with the whole carriage looking at me while he played a tune especially for me, and many other things. I've taken 2-3 more long-term train rides since, but this is definitely my most unforgettable train ride experience. 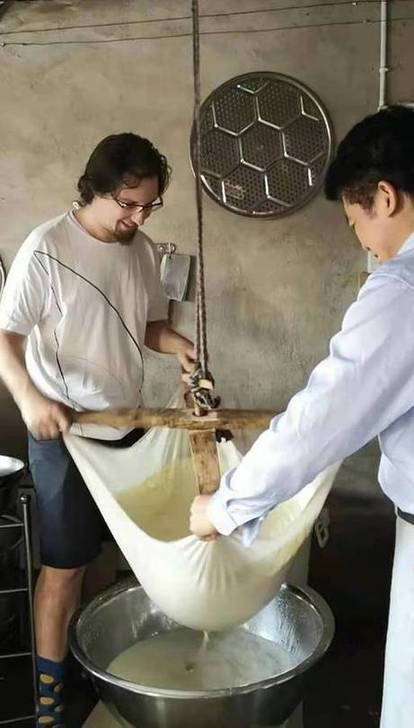 Harald Buchmann experiences the traditional way of making tofu in a remote farming village in China.(Photo provided to Guangming Online)

Skipping forward, I taught English in a small city in remote Northeast China, seeing farmers still using donkey drawn plows, visiting a farming village and their school as well. I've later spent a semester at the world famous Tsinghua University in 2012 to improve my high level Chinese (HSK6), I've started to read Chinese politics as well as ancient philosophy like Confucianism in original language, and I've learned a great lot about socialism of the 21st century, remembering clearly how the change of the Main Contradiction was announced in 2017, how I instantly knew this was a major change, and how it drove me to invest a lot of time reading up more on the latest political theory.

Besides politics and international relations, I'm a big fan of Chinese tea culture, visiting farming villages and tea farms, seeing how the policies affect the countryside and the lives of ordinary people, how it connects to the Belt and Road, and how various Chinese interpret what's happening in their country and how the West responds to it.

I often get accused of being a paid shill, troll, stooge or other insults, paid by the CPC to do propaganda, to which I have the following response: I'm a reflected, conscious, critically thinking, and deeply convinced supporter of the CPC without any payment. That doesn't mean I condone everything the CPC has ever done, or anyone acting in the name of the CPC is perfect. I haven't met any supporter of any political party in the world, who never criticized their favorite party, no matter how devout. The reason why I support this party, is because it is the one political organization which has during my lifetime reduced human poverty and suffering like no other organization in the history of mankind. It has a philosophy of peace, poverty reduction, environmental improvement, and economic development, which I would summarize in one word as: "sanity". There are constraints of the feasible, people are still poor and many problems aren't solved. But it is impressive to see the overall performance of this political institution, see its popularity, see its responsiveness to external changes and the overall changes of China.

Again, I'm not a religious follower of the CPC, nor is China paradise on earth, but I hope to tell some stories in the future, of what I'm seeing on the ground, of what people around me tell me, where they come from, how their parents grew up, and compare those to stories from India, Africa, the Middle East and South East Asia. It's easy to take an upper middle-class family in California and say their lives are better than in a Chinese tier 3 city. I've interviewed a large number of truck drivers and spent a night in a truck, I've met many farmers, I've spoken with many uneducated workers, so I see China far beyond the white collar foreign-trained middle managers most expats get to see. My job also allows me to talk to white collar workers in Africa, the Middle East, and I've spent one semester of my masters in the Philippines, and did a project in India's Punjab region. So I do have some level of comparison when talking about China.

This is what I will share, because I feel it's the part of China which isn't shared enough in English speaking media. I will focus on how things connect: philosophy, culture, politics, tea, farmers, workers, the life of simple people and the world of international relations. I am happy to respond to comments and feedback during this journey.