Distrust Your Displeasure: Hot Pot as a Means to an In 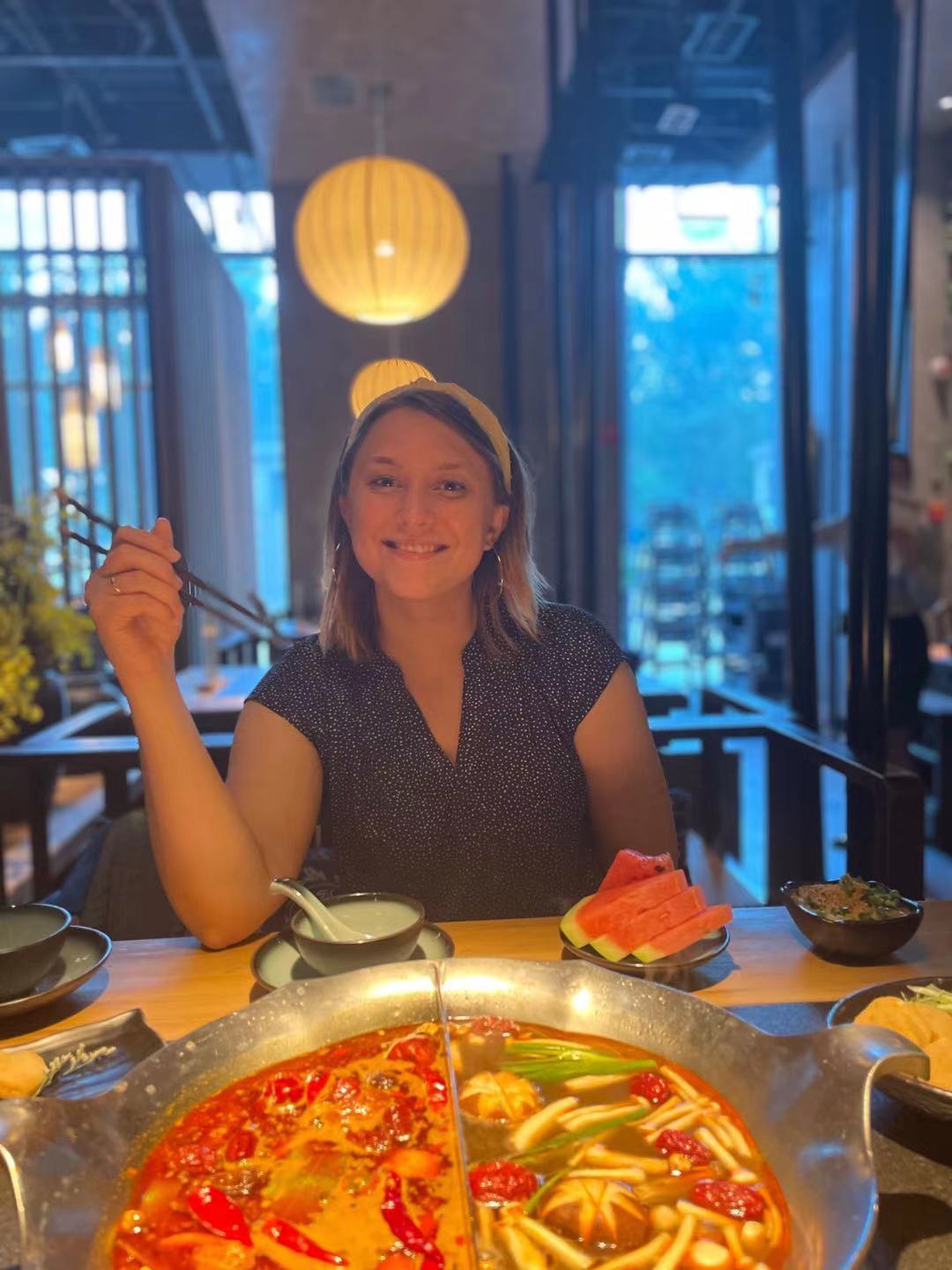 My favorite place in all of China, where I feel most at home, is a hot pot restaurant at full speed. On any street corner, and in any plaza, here you can find the steaming cultural institution that all Chinese people can seem to agree on. Look around to the tables, packed with families, circles of friends, teenagers on dates, and you will not see one unhappy face. At the center of each table stews a pot deep and fertile as a witch's brew. Heaping plates of treasures surround: tripe, clams, shaved lamb, balls of fish. Their fate is to drown in a kind of mud water: dense, thick broth packed with jujubes, goji berries, duck blood, and a blend of spices so strong it creates its own element.

The first time I was offered hotpot (or "fire pot" in English) I did not account for the Sichuan spice (something I had never even heard of) which upon first heaping bite, could only be compared to the mouth-numbing slug I licked on a dare at nature camp in the 6th grade. And indeed, both the slug and the Sichuan serve a similar biological function: to confuse the mouth.

The banana slug of the American northeast, where I spent my childhood, produces an anesthetic in the mucus of its skin that serves as a self-defense mechanism, numbing the mouth of a predator who would be foolish enough to disturb it. This slug is an unlikely brother to the Sichuan peppercorn which both use treachery to outwit their would-be conquerors. The unwitting fox (or the unenlightened American) are forced to relinquish their treasure back to the earth (or back to the plate) before discovering the tender and viable meat just below the surface.

Hot pot is a wild thing. The simmering broth which sits at its base, brimming with green peppercorns and bay leaves and duck blood and chili oil burst with the volatility of a volcanic spring. It is as biologically diverse as the most protected vernal pools, and just as mercurial. The residents of a vernal pool are a transient crowd. At the turn of the tide there might be a migration of fairy shrimp, or maybe under the moonlight the blue spotted salamander will make their temporary home. Mother nature may have her usual suspects, but who occupies her shoreline waters, and at what time, is a dance without decency or sense. Comparably, each hot pot restaurant may offer the regular favorites (fish tofu, brainy lumps of processed shrimp) but which elements plunge into the water, and at what time, is a ritual subject to the senseless whims of a different kind of deity: the human being.

Hot pot is a dish that has been eaten, in one form or another, for a thousand years. From lavish emperors to modern school children. This is a dish that is so embedded into the fabric of Chinese society it is practically a natural phenomenon. For, like the evolution of the banana slug, it seems to take on a life of its own. It mutates and evolves to fit its environment, it presents in different colors, shapes, and forms but shares a common genealogy. Mother nature never spawned one of her children without giving them their own defense mechanism, and fittingly to its natural rights, hot pot is a food that fights back.

As one who enjoys hot pot, I have fought (and lost) many battles. The first time I tried to eat the dish was a foolhardy defeat. In one round I was knocked out by the Sichuan peppercorn and left to sip on broth and hot water, tail tucked between my legs. At first, it was only a tentative politeness that forced me to try the dish a second time. For all my might I could not understand this obsession my Chinese students and colleagues had with this dish that was so uninviting to me. There was a measurable cultural difference, a clear divide, and it came down to taste. They could find enjoyable what I could not. It was a secret mystery, a kind of protected knowledge I felt I had no access to. Just another way that I as a foreigner with foreign tastes, was on the outside looking in.

Yet, much to my chagrin, I remained continuously and incessantly invited to partake. It was only a vain politeness that prohibited me from saying no. It was through this reluctant process of battle and defeat, through coming face to face with this new opponent, it became known to me. The spice, I discovered, was not so much unenjoyable as it was unfamiliar. I had mistaken the initial shock at the new sensation as displeasure. My protective mechanisms had been overprotective. This might serve the wood fox just fine, for wariness of the unknown may be the difference between ingesting a poisonous frog and a harmless salamander, but for the traveler it is counter-evolutionary. It was aversion to the unknown that kept me hungry and separate for many months as I failed to convincingly enjoy these convivial dinners with my Chinese friends.

Soon familiarity bred contentment. I could identify the various flavors and sensations and begin to name them. The orange gelatinous stick became "crab" and the brain shaped lump became "shrimp" and soon my brain began to accept this mystery as food and these sensations as a natural part of the feeding process.

Now, a hot pot dinner has become a much-anticipated part of the week. There is a nameless energy about the air on a hot pot night, like the full summer moon or the turn of the tide. A feeling that requires a simple translation of only a look between me and my conspiring friend to be put into action. The waiters know us and the kitchen staff waves. We are well greeted as we make our way to our corner in the back. We are easily remembered, for often we are the only foreigners here. It is not a curiosity because the food is delicious, but I think sometimes the other patrons do find it curious to see us sitting among them. Soon, however, they ignore us as heaping plates of mushrooms and meat parade out before them. There is no room for the performance of otherness here. We all have more important matters to attend to.

Hailey Neal is a writer and teacher of writers who, in the most aggressive snowbird campaign in human history, splits her time between Beijing and Vermont. She has her bachelor's in professional writing and her master's in education. Her work has appeared in or is forthcoming in From Whispers to Roars, The Closed Eye Open, Ember Chasm Review, The Finger Literary Journal, Tempered Runes Press, 805 Lit, The Dillydoun Review, and the Beautiful Cadaver Soundcloud project. Alarmingly, she had to look up whether to capitalize "professional writing" for this bio. If you find any other typos in here, this is a test.

The views and opinions expressed in this article are those of the author's and do not necessarily reflect the position of GMW.cn.