Navigating the Pandemic as a Foreigner in Beijing 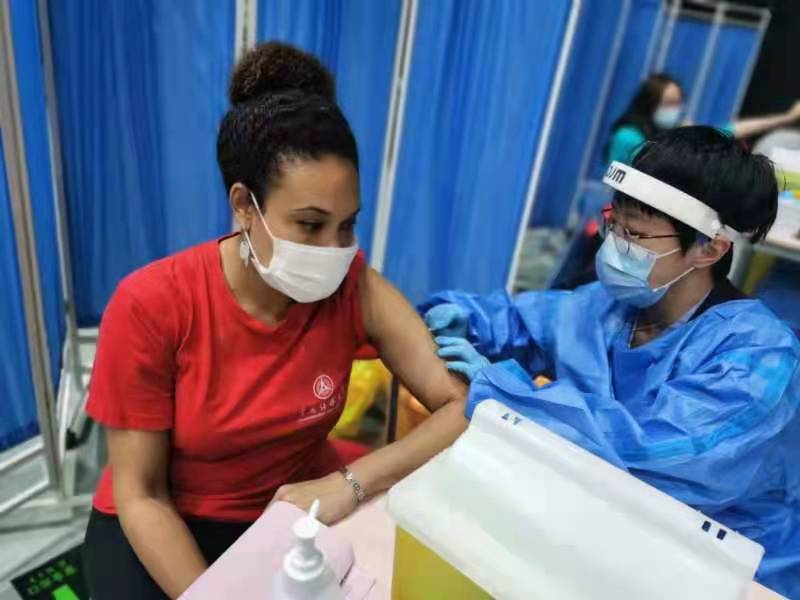 Vicki Cann is seen receiving her first dose of the Sinovac vaccine on April 1st.(photo provided to Guangming Online)

When reports started surfacing that some sort of pneumonia like virus had popped up, it was of little concern to me, instead I wondered what they would call this one. We now have bird flu, swine flu, or simply “the flu”, so I thought it was going to be just another of these. Then, as the end of January 2020 approached things started getting a bit tense here in Beijing. However, anything short of a massive gas explosion outside of my window would not really get my attention. Then by the beginning of February, we slowly started noticing a series of concerning but effective changes.

For most, 2020 now seems like a vague haze that was spent primarily indoors. At this point, much of the rest of the world was eyeing China with an indifferent curiosity, confident that their own national borders would protect them from this new peculiar illness. Those concerned were usually relatives or friends of foreigners residing and working in China. I remember attempts by a very worried and caring friend, who made a very compelling case encouraging me to leave China before things worsened. Having been brought up in a pragmatic family environment, supported by equally rational friends, the advice I received from home echoed the sentiment of “stay put”. Call it reason or call it tough love—they were right. When different embassies were busy arranging chartered flights for their nationals, some with minimal costs and others at astronomical prices, I asked myself, 1.4 billion people cannot simply relocate, what are they going to do? So, I made the decision to stay and weather the storm.

Authorities across the entire country were swift in implementing safety precautions in a timely and constructive manner. These measures were executed across the retail industry, residential areas and university campuses alike. China’s success in managing and containing the spread of Covid-19 greatly stems from its technological prowess exhibited in a plethora of ways, including the use of its prosperous e-commerce platforms and the launch of a QR code system which serves as a sort of health certificate. These QR codes are color-coded with green indicating that an individual is healthy; yellow illustrates that the person has to be quarantined for 7 days and red signals the need for a 14 day quarantine period.

Each province created its own health kit and utilized geolocation data supplied by telecom carriers. One’s recent travel history is recorded to better identify if the person has visited any high risk areas within the last two weeks. This digital health certificate also illustrates a person’s vaccination status and recent Covid test results. Most public venues in China requires visitors to have a green health code before being permitted entry. These mini-apps are particularly advantageous for contact tracing purposes and are also used on university campuses especially when students return to the property. This system is arguably one of the most thorough and efficacious in the world, one that has played an instrumental role in reducing the spread of the virus in China. Countries like Singapore and Australia have adopted a similar approach, however, many nations have had the opportunity to learn from China’s experience and adapt these lessons to their own local contexts.

Life on most university campuses in Beijing were quite strict in their anti-epidemic efforts. During the pandemic, many foreigners had the opportunity to become better acquainted with online apps such as Meituan, Eleme, Jingdong Maicai, Dingdong Maicai and the like. Those who have not had the opportunity of living in China are unaware of the seamless efficiency of these kinds of apps. In less than half an hour one can have a variety of goods delivered to one’s doorsteps ranging from basic groceries to other daily household items such as cooking pots and even clothing items. Having spoken to a few friends in the U.K., most are in disbelief when I share my experience with these apps, as they usually have to wait days for even basic goods like bread or milk. Needless to say, these services were vital not only to those on college campuses, but to the entire country especially during the height of the pandemic.

Let’s fast forward to March of 2021, all foreigners on most college campuses and those living in China, have had free access to the vaccine. The country has embarked on a massive vaccination campaign with over one billion vaccine doses administered to date. The government intends to vaccinate 80% of the target population by the end of 2021. This ambitious undertaking is one that has been increasingly gathering momentum as the country’s leadership is committed to fulfilling its goal. According to the spokesperson for the Chinese Ministry of Foreign Affairs, who presided over the press conference held on June 16th, China has donated over 350 million doses globally, while the U.S. for example, has only pledged to donate 80 million doses by the end of June. These numbers speak volumes as the U.S. the U.K. and the European Union have all been accused of hoarding vaccines. According to a report compiled by an organization called the International Rescue Committee (IRC), these countries had pre-purchased sufficient Covid-19 vaccines to vaccinate their respective populations more than twice, while still having an excess that could vaccinate approximately 20 other countries that are currently in crises. Antonio Guterres, Secretary General of the United Nations, is reported to have said that the race to vaccinate the globe’s population, represents the “greatest moral test of our times”. However, China has responded in a completely different manner with its active assistance to developing countries which further illustrates its dedication to fostering and building a community with a shared future for all mankind.

Many western nations have been quick to criticize China without acknowledging the pioneering role the country has adopted on the international stage. China’s secret to combating Covid stems from the self-discipline of its people and those charged with the responsibility of implementing the regulations. Irrespective of the cause, nowhere in China did we see mass rallies, protests or movements, instead we saw the pursuit of a true social commitment between a government and its people. In addition to its successful containment of the virus, China has much to celebrate this year, as July 1st marked the 100th anniversary of the founding of the Communist Party of China (CPC).

If I had to sum up my Covid experience in China in two words, it would be: thankful and grateful.

Thankful – I am thankful to be one of the fortunate foreigners to have been able to remain in China, while others had to leave either voluntarily or involuntarily. This opportunity was available only to a few and I am thankful that I am one of them.

Grateful – I am grateful to have been lucky enough to have received the vaccine in this country as the government acted quickly and decisively to combat Covid and minimize the outbreaks. I am also grateful for the sense of community that the pandemic created amongst people who were once strangers.

One of the greatest challenges in life is to adopt an “attitude of gratitude”. This is not easy to attain and also not easy to maintain, but it is one that we should all strive for, even as the pandemic continues to rage on in other parts of the world.

The views and opinions expressed in this article are those of the author's and do not necessarily reflect the position of GMW.cn.