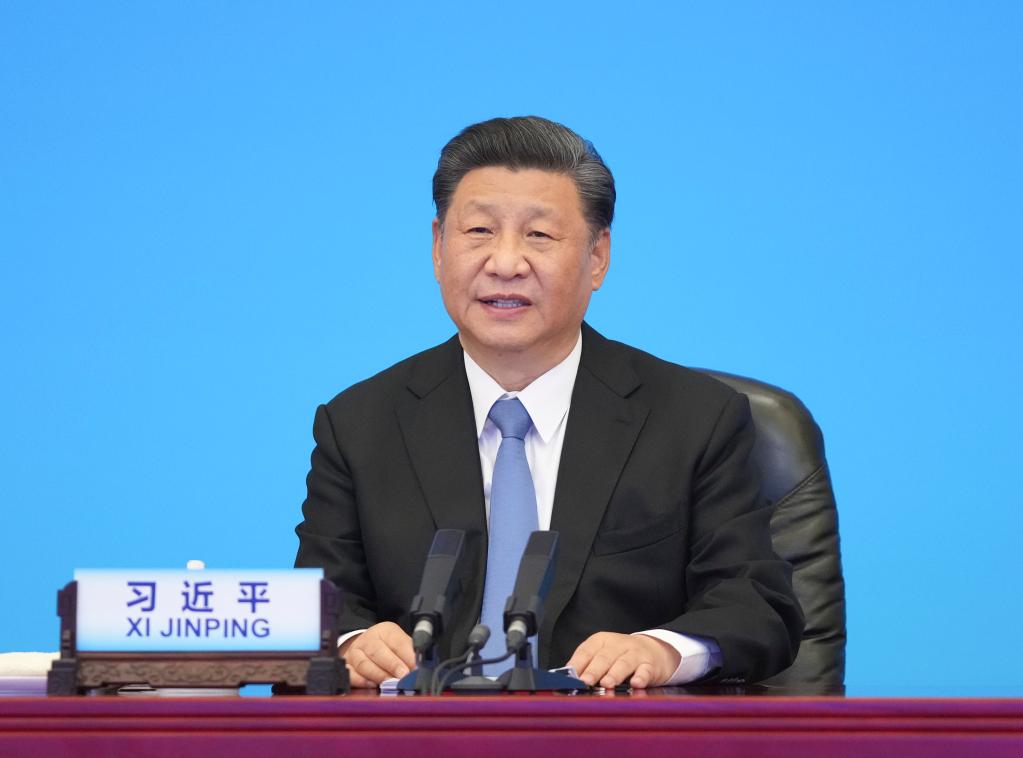 BEIJING, July 6 (Xinhua) -- Chinese leader Xi Jinping on Tuesday urged political parties in the world to shoulder their responsibility for the pursuit of people's wellbeing and progress of mankind.

Addressing the CPC and World Political Parties Summit via video link in Beijing, Xi took swipes at practices of seeking technology blockade and decoupling, politicizing the pandemic, "political manipulation for the purpose of sabotaging the development of other countries," and practices of "seeking hegemony by way of group politics."

The cloud summit, which gathered leaders of more than 500 political parties and organizations from over 160 countries, was convened as human society has "once again found itself at a historical crossroads" that leads to either hostile confrontation or mutual respect, seclusiveness and decoupling or openness and cooperation, zero-sum game or win-win results.

"The choice is in our hands and the responsibility falls on our shoulders," Xi told party leaders.

Political parties, as an important force behind human progress, need to set the right course forward and shoulder their historical responsibility to ensure the people's wellbeing and pursue the progress of mankind, Xi said.

Xi called on political parties to shoulder the responsibility to steer the course by shaping the shared future for mankind, and to build consensus by upholding and promoting the common values of humanity.

"With a strong sense of responsibility for the future of all mankind, we need to champion the common values of humanity, foster broad-minded tolerance toward the understanding of values by different civilizations, and respect the explorations of different peoples," he said.

Political parties need to shoulder the responsibility to promote development by bringing greater benefits to all peoples in a fairer manner, Xi said.

Noting that all countries and nations are equally entitled to development opportunities and rights, Xi said political parties should face squarely up to major problems such as wealth gap and development divide, with particular attention and care given to underdeveloped countries and regions and impoverished people.

He urged political parties to jointly oppose the practice of seeking technology blockade and divide as well as decoupling.

Calling for more cooperation in addressing global risks and challenges, Xi said in the face of the pandemic, political parties should work together to close the "immunization gap," and must oppose the practice of politicizing the pandemic or attaching a geographical label to the virus.

Xi also called on political parties to shoulder the responsibility to improve governance by enhancing the capacity to ensure people's wellbeing.

"The judgement on whether a country is democratic or not should be made by their people, not by a handful of others," he said.

It is the unswerving goal of the CPC to run China's house well, ensure a happy life for more than 1.4 billion Chinese people, and promote peace and development of all mankind, Xi said.

Xi said the CPC will unite and lead the Chinese people in pressing ahead with the Chinese-style modernization to make new contributions to humanity's search for ways to modernize.

There doesn't exist a fixed model for the path to modernization, and the path that suits a country will serve it well, he said.

"Cutting one's feet to fit the shoes will lead nowhere," he added.

The CPC will unite and lead the Chinese people in taking comprehensive steps to deepen reform and opening up to make new contributions to shared development and prosperity of all countries of the world, Xi noted.

Xi said the CPC will shoulder its responsibility as a major political party in a major country to make new contributions to improving the wellbeing of mankind.

Since the 18th CPC National Congress, all the 98.99 million rural residents living below the current poverty line in China have been lifted out of poverty, enabling the country to meet the poverty reduction target set out in the UN 2030 Agenda for Sustainable Development 10 years ahead of schedule.

The CPC is willing to contribute more Chinese solutions and Chinese strength to the poverty reduction process worldwide, Xi said.

The country will spare no effort to support international cooperation against COVID-19 and to enhance the accessibility and affordability of vaccines in developing countries, and will contribute more to the global fight against climate change, he added.

"We should stand opposed to the practice of unilateralism disguised as multilateralism and say no to hegemony and power politics," he said.

"China will never seek hegemony, expansion or sphere of influence," he added.

South African President Cyril Ramaphosa, also president of the African National Congress, and 20 other leaders of political parties and organizations spoke at the summit. They agreed with Xi that political parties should shoulder the responsibility for the people's wellbeing, and said they are willing to work with the CPC to build a better world.

Wang Huning, a member of the Standing Committee of the Political Bureau of the CPC Central Committee, and other senior CPC officials attended the summit.

Over 10,000 representatives of political parties and various circles attended the event.

The summit issued a joint initiative, which expressed the common will of political parties attending the event to safeguard world peace and development and promote the wellbeing of the people.