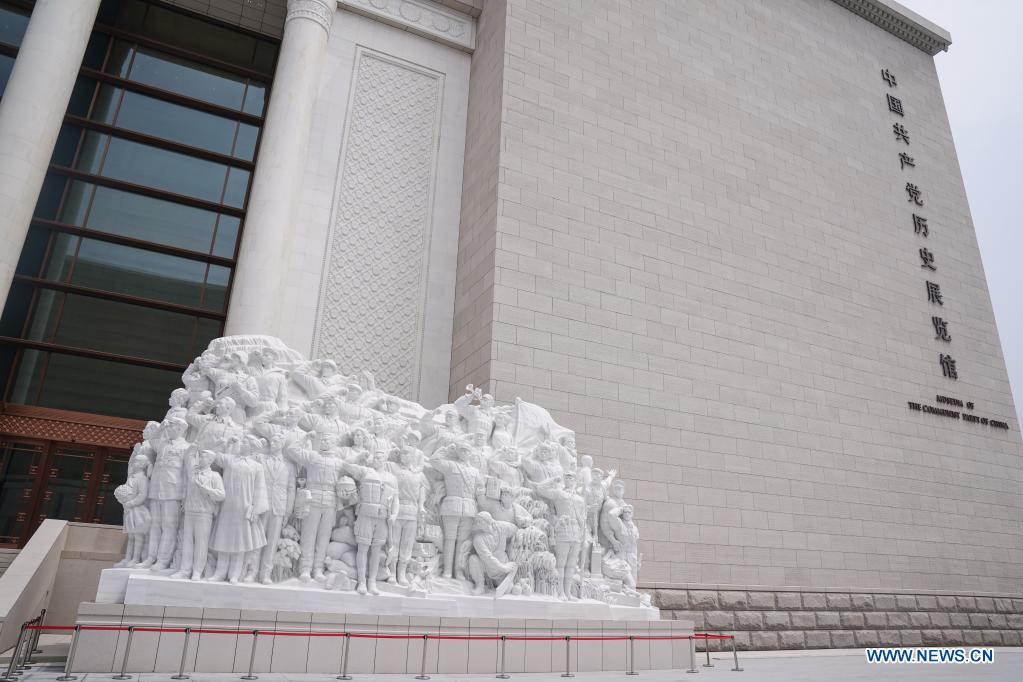 Photo taken on July 15, 2021 shows the Museum of the Communist Party of China (CPC) in Beijing, capital of China. Located in the Chaoyang District of Beijing, the Museum of the CPC opens to the public from July 15 and accepts online appointments for free visits from 9 a.m. to 5 p.m. (Xinhua/Peng Ziyang)

BEIJING, July 15 (Xinhua) -- The Museum of the Communist Party of China (CPC) on Thursday made its debut to the general public, attracting thousands of visitors to pay tribute to the CPC's centenary history.

Located near Beijing Olympic Park in the northern part of the city, the museum Monday announced that it would accept online appointments for free visits.

A long queue formed at the entrance of the museum in the morning.

As this year marks the centenary of the CPC, the new landmark became an instant hit. Posts about the museum's online appointments have gone viral on China's social media platforms, including WeChat and Weibo.

Lin Chenglan, a 72-year-old who lives nearby, came to see the site almost every day to follow the progress of construction.

"I was born the same year as New China was founded. I have witnessed how the country has grown stronger and stronger under the leadership of the Party," said Lin. "I must go and visit the museum at the first opportunity."

Despite strong demand for visits, the museum limited the daily visiting capacity to 3,000 for COVID-19 prevention.

More than 60,000 people have visited the museum during special events and organized tours since it was inaugurated last month.

The museum completed construction in May, following 1,000 days of work by nearly 50,000 people.

The magnificent architecture takes the shape of the Chinese character "gong," which looks like a horizontal H. "Gong" means workers or labor in Chinese, implying that the CPC is the vanguard of the Chinese working class, the Chinese people, and the Chinese nation.

A site devoted to permanent and comprehensive exhibitions of the Party's history, it shows how the CPC has united and led the Chinese people in blazing ground-breaking paths and demonstrates the fine spirit and precious experience drawn from within.

Yang Qingmin was impressed by exhibits about the early days of the Party.

"It is hard for people today to imagine how many difficulties were faced by heroes of that time to found the CPC," said Yang, a retired bookstore staff member.

For Yang, the Party's centenary is an opportunity to commemorate the martyrs. "We must pass on their spirit, generation after generation," Yang said.

More than 2,600 pictures and 3,500 pieces or sets of exhibits are on display. Among the items is the manuscript of Karl Marx's notes from Brussels.

A girl lingered in front of sculptures of Karl Marx and Friedrich Engels.

"It is important for younger generations to know about the history of the CPC and the two centenary goals," said her grandfather.

"I'm confident that my granddaughter will see the realization of the second centenary goal (of building China into a great modern socialist country in all respects)," said the old man.

With just over 50 members at the time of its founding, the CPC today is the world's largest governing party with more than 95 million members, leading a country of more than 1.4 billion people.

Ge Jingmin, a high school student, went for the online appointment the very first minute she saw the notice.

"Seeing how the CPC's leadership has made our country increasingly prosperous, I am having a keener heart of joining the Party and make my part of contribution," said Ge, whose parents are both Party members.