How staying close to the people has helped the CPC to stay vibrant for 100 years: Harald Buchmann 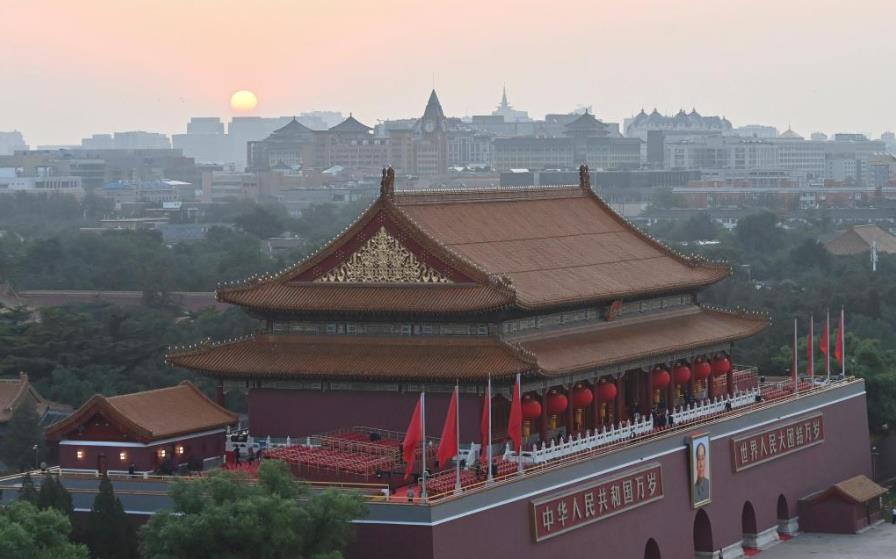 The Communist Party of China CPC’s centenary celebration has been described in many English language commentaries as “nationalistic”, failing to grasp the actual sentiment in China. The concept of “rally around the flag” and covering up internal conflict by focusing on a foreign enemy is not at all what I witness in China.

Yes, the speech mentioned time and again how great, magnificent, strong, and powerful China has now become. But this is both a common patriotic sentiment and in the case of China a quite incredible fact. China under the leadership of the CPC hasn’t grown up in the “loving embrace and tender support” of a benevolent international community, instead the CPC has time and again beat all odds and carried away most improbable victories. In order to understand China better and adjust one’s expectations regarding China in the future, it is vital to comprehend, why these successes were possible. Too often the lack of explanation is replaced with an absurd idea of a monolithic top-down dictatorship where 90 million people brainlessly follow a single omniscient leader, as impossible this would be in reality. This notion then bears the racist consequence that common Chinese are not able to see when they are oppressed and need Western people to tell them what’s good for them. If it was that simple, then how could there still be poverty in the world? If Chinese common people were so subservient, then why would the US some 120 years ago massacre them and make laws to explicitly prevent Chinese from immigrating?

So if we agree that leading a vast country with enormous differences in culture, language, religion, and customs first to independence and then to moderate prosperity, then it is important to start asking how the CPC has done it. I want to specifically look at 4 distinct periods, with a focus on the present.

The first phase was before the PRC was established, when the CPC fought a war to liberate China from oppression and a civil war to gain control over the country. More than once the CPC seemed almost destroyed, and as late as 1947 was forced out of all major cities by the Kuomingtang KMT army supported by the US. The military forces were estimated at least 3 times as large and the US can be forgiven for thinking, surely Chiang Kaishek would prevail. Just two years later Mao Zedong led the CPC on Tiananmen declaring the founding of the PRC. KMT’s forces were reduced to a few islands of Taiwan and Fujian province. How was that possible? One main reason is that Chiang worked with local warlords, even bandits, who could help him oppress local unrest and CPC activity. The CPC on the other hand worked with the poor, the farmers, the oppressed and wherever they came they liberated the working people by granting them ownership over capital and land. Of course this people first method was far more popular, to the point where large parts of the common soldiers of the KMT army deserted and joined the People’s Liberation Army of the CPC, knowing their families would be better off under CPC liberation than KMT oppression.

Phase II, after 1947 the construction of the PRC began, not without setbacks, but overall a massive success. While the West mostly remembers the failure of the Great Leap Forward and the Cultural Revolution, there’s much too little knowledge about key economic indicators: during Mao’s leadership the PRC saw an average economic growth of 6% per year, which is already notable. Much more important, however, is that again the livelihood was put before the economic growth: life expectancy grew from 33 to 65 within just 30 years until Mao’s death in 1976. That’s almost double, it’s also more than one additional year to live, every year! And that is despite famine, despite wars against the US in Korea and Vietnam, and despite losing all support from the Soviet Union during that period. This wasn’t just lucky coincidence, but again the willingness to really go “down to the ditches” and sending experts, teachers, and doctors into the villages. Never in China’s recorded history had the ruling class showed this level of care for the lives of common people. To this day, old people in China get shiny eyes when talking about Mao Zedong and Zhou Enlai.

Phase III can be called Reform and Opening and is marked by Deng Xiaoping’s sweeping economic reforms. The rationale for the reforms again was a focus on people’s wellbeing: socialism doesn’t mean poverty, and in order to succeed, socialism must provide a good life to the people. If markets can help modernize socialism, they are as legitimate as state planning in a capitalist system. So, Deng did not introduce capitalism to China, but merely foreign capital and an increased role of markets as distribution mechanism. The analysis at the time (called Main Contradiction of the Chinese Society) was that the main problem was the backward production capacity versus the material needs of the people. In other words, once literacy, food security and basic health care were achieved, it was time to increase the income levels of people.

The phase IV has just started in 2017 when the Main Contradiction was reassessed again, saying the production capacity is by no means weak anymore, China being world leader in a growing number of industries, but the development is uneven. The new focus is on a more balanced development, namely between different regions of China, between wealthy and poor Chinese, and between man and nature. Let’s look at some achievements and methods, because once again the CPC is “going in the ditches” to achieve the much-needed improvements.

When Xi Jinping during the centenary celebration speech declared to applause that the Chinese people and the CPC cannot be divided apart, he speaks with the confidence provided by numerous international surveys, indicating that already high support for CPC leadership has further increased during the Covid crisis, to stellar 90+ % support for the central leadership.

And the support is not surprising for people who have close interactions with Chinese society, especially people who understand Chinese and live in a Chinese neighborhood and frequently visit Chinese villages, as opposed to expats living in pure expat neighborhoods or self-proclaimed China “experts” watching the country only from abroad. Because the “Party being close to the people, living with the people, breathing with the people” may be interpreted in two ways, supportive or oppressive, but when one actually has contacts to local grassroot party officials, then it becomes fully clear the supportive interpretation is the correct one.

There is the neighborhood party official, in my case a middle-aged lady, very friendly and eager to help, who sometimes contacts me to collect statistical data such as whether I’ve been vaccinated or planned to get vaccinated against Covid. She had provided me with information on the safety of vaccinations, explained to me how to schedule the date and where to get it, but didn’t pressure anyone to do anything. She doesn’t hold any formal power, but rather works as an intermediary in case of conflict, and as a personal information channel when the government needs to convey messages to the people.

When Covid started in early 2020, these local CPC officials checked with everyone in the neighborhood, made sure people were informed about current quarantine rules, and also called for help if somebody had mental or psychological problems coping with the situation. They also ensure everyone with a fever gets tested and the whole neighborhood would go on strict lockdown if a case was detected. It’s not their authority, they merely ensure the regulation at the time is carried out. This helps people without legal knowledge or interest in news be fully informed, prevents panic and misinformation, and is an important reason why Covid in China has been contained so well.

This is the local outreach in a modern, rich city. Many Chinese growing up in such cities don’t even know how poor and harsh living conditions still are in remote villages. It’s not absolute poverty anymore, but it’s nowhere near the first-world living standard enjoyed in China by hundreds of millions in the new middle class. However, if children from this middle class choose to join the state administration after university, they have to get the full picture. Therefore most young party officials have to go to the countryside to work on poverty reduction as a first step in their career in government. They may find ways to educate local farmers on doing e-commerce, or find aspects to develop local tourism, or develop a local brand from existing products. To reach this goal, they bring expertise from their educational background as well as their inner-party connections and trainings to remote locations, which brings real benefit to people. The arrangement is a win in all directions: young cadres see what it means to work for the people, and why working for the workers and farmers is indeed very relevant, the villagers get a material benefit, the CPC gets increased credibility, and China as a whole sees further positive development.

A common statement in the West is “Socialism with Chinese Characteristics is in fact just capitalism”. If it was that easy, why don’t capitalistic developing countries see the development of China, then? China isn’t capitalist, because capital and its owners are not above politics. There is no capitalist class ruling over the political class. Contrary, politics guides capital even in private enterprises via CPC connection offices and not to the detriment of companies’ development. These offices bring benefit in two ways: they report back to the government on the economy from the perspective of private enterprises ensuring legislation and regulation doesn’t misinterpret the state of the economy, and they have some influence to ensure companies work in the interest of the country and the people, not just of the company owners; on the other hand they also provide valuable insights of national strategies to the economy, which areas to invest more, and which regions to expand to. They facilitate the flow of information. This may sometimes cause tension, but the overall result can be seen in the stellar performance of the Chinese economy.

I’ve seen more examples, from interviewing truck drivers to meeting farmers in various villages. The recurring theme is that life keeps improving, that people feel freer than ever before, and people are fed up with foreigners criticizing China for how it is managed internally. There is no interest in telling other countries how to handle themselves, no interest in controlling the world. China as the world’s largest economy is not a goal but a consequence. The goal is to provide higher incomes and a better life to the people.