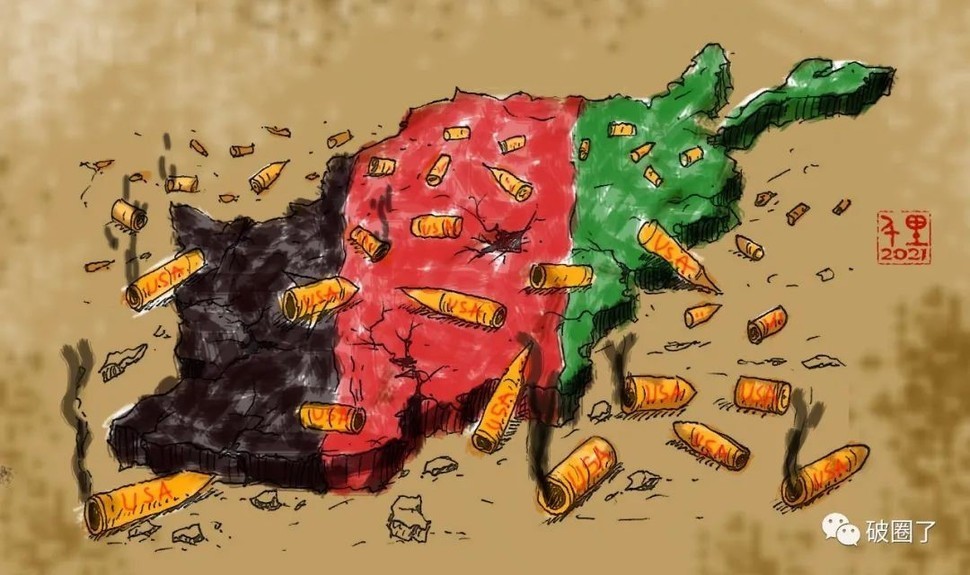 Following the resignation of Gen. Austin S. Miller, the commander of US and NATO forces in Afghanistan, the US Central Command formally took over control for US forces in Afghanistan on July 12, and the latter will cooperate with the Afghan security forces in air strikes by the end of August. Earlier on the morning of July 2, US and NATO forces withdrew in a rush from the Bagram Airfield, 50 kilometers away from Kabul, leaving behind 3.5 million items of equipment including vehicles, light weapons and ammunitions. Electricity was cut off by US forces before the withdrawal without notifying the Afghan forces. It wasn't until two hours later that the Afghan forces took over the military base, which had been under US control for 20 years.

And two weeks before the US withdrawal, Donald Rumsfeld, the neoconservative representative who initiated the wars in Afghanistan and Iraq passed away. The hasty US withdrawal after 20 years of occupation was highly symbolic – 20 years of US intervention in the Middle East characterized by unilateral actions, power politics and export of American-style democracy has failed completely.

Afghans: it's important to us that the US is out of here

Since modern times, Afghanistan has proven to be the "Graveyard of Empires". The British Empire and the Soviet Union were once trapped and defeated there, resulting in their ultimate decline. Is Afghanistan a graveyard for US hegemony? No one knows yet. But what we know for sure is that it's a blackhole that sucks American money and lives. More than 2,000 American soldiers have lost their lives there over the past 20 years, and direct military spending has exceeded $900 billion.

What started as a counter-terrorist war ended up in 20 years of intervention aiming at "reforming" that Middle East country with American-style democracy, and finally a hasty withdrawal, leaving behind nothing but an ugly mess. "We didn't go to Afghanistan to nation-build … we have achieved all our goals in Afghanistan", President Biden defended the withdrawal of US forces, despite the fact that even top strategists in the US are not buying what he said, they criticize the pullout as being too quick and too complete. Some are even saying that 20 years of US military actions in Afghanistan have all failed.

After 20 years of wars, neither freedom nor prosperity has been delivered to Afghanistan or Iraq. Wars, turmoil, extremism, drugs and violence have flooded the two countries. US intervention made it impossible for them to explore a development path on their own, rather it has interrupted and diverged the development paths of these countries. Even more tragic is that over the past two decades, millions of innocent civilians have been killed and the homes of tens of millions of people have been destroyed in the Middle East, resulting in the largest refugee wave since World War II.

"In the two short decades since the shock and awe of that attack (9/11), most of the previous century's American efforts to bolster peace and prosperity have been undone. Gone are the constraints on the strong bullying the weak provided by international law, multilateral institutions, and plurilateral and bilateral commitments to mutual aid and cooperation. The norms that long moderated international and domestic behavior have been largely erased", Chas Freeman wrote in a commentary in February 2020. In his eyes, most of these "American efforts" have been erased by the US itself.

No matter how powerful they think they are, after putting in enormous manpower and resources fighting 20 years of wars in the Middle East, the arrogant US forces had no choice but to pull out in haste. It tells the simple truth that those engaging in confrontation from a position of strength, recklessly interfering in others’ internal affairs and disrupting regional order will eventually have their heads bashed bloody against stark realities.

Though self-proclaimed as "universal", American democracy has proven to be unfit for the Middle East. Even worse, it has left behind a dead knot unlikely to be tackled for decades to come. There are multiple approaches for a country to achieve democracy and find its own development path. No single solution fits all the problems. After all, it's up to the people of a country to decide what system they want and how to achieve modernization. Imposing American democracy with fighter jets and bombs will do no good except leaving an indelible scar in the Middle East and among the peoples living there.

Now, US strategists are in heat discussions – who will fill the power vacuum in Afghanistan? Will Turkey, a NATO member, occupy the Kabul airport? And what actions will be taken by the neighbors of Afghanistan? The stark truth is, none of that is important. What's important to the Afghan people is that the US is no longer there.

Afghanistan is at a crossroads – geographically, it sits at the center of Asia and connects all four directions of the continent, and this is why it has been a target for major empires since modern times. The fate of the country seems almost pre-destined in the old international order; but realistically, Afghanistan can finally take a breath after the pullout of foreign troops. The possibility of solving its domestic problems in a "Afghan-owned and Afghan-led" way now looms large again, and Afghanistan is again standing at a historic crossroads.

The international community worries that Taliban may take control of the Afghan government, but the future of the country will be eventually determined by the Afghan people. Taliban will of course make itself heard as it represents the interest of Pashtuns. The situation today is, Taliban controls the majority of the Afghan territory, and it has shown the intention of resolving the Afghan issue through political dialogue. So it's time we save our discussion on whether military fights will continue or whether different parties will sit down and talk, because ultimately the answer lies in the hands of Afghans.

In the last civil war of Afghanistan, Taliban was not able to control the entire Afghan territory despite it was in power. Today it's unimaginable that unity among different ethnic groups and tribes could be maintained merely through force. The balance of power between today's Afghan government and Taliban is hugely different from the time when the Soviet Union pulled out. Bear in mind that Taliban owned a huge quantity of heavy weapons and a strong air force at the time thanks to US support. The Taliban militants today have none of these, although they've controlled vast land and traffic channels near cities, it will be difficult for them to really conquer cities. If Taliban chooses to resort to force, then the war will be a lengthy one and god knows how that will eventually play out.

Now the biggest change after 20 years is of course the pullout of American troops. Afghanistan's neighbors in general hope to see a stabilized country without extremist organizations and drugs. Unlike the United States that is thousands of miles away, Afghanistan's neighbors such as Russia, China, Iran, Pakistan and Uzbekistan all expect a peaceful Afghanistan, none of these countries like to see terrorists hidden in their neighbor's home.

On July 7, Taliban spokesman Suhail Shaheen said that Taliban welcomes China to invest in reconstruction work of Afghanistan as soon as possible, and it would guarantee the safety of Chinese workers in the country. Shaheen also said that China is the most important investor in Afghanistan, and that after the complete withdrawal of US forces, Taliban may negotiate with China on investment issues.

On July 9, a delegation of the Afghan Taliban's political office visited Moscow and made clear the following messages:

Second: Taliban will guarantee the security of foreign diplomatic and consular missions in Afghanistan;

Fourth: After the civil war ends in Afghanistan, Taliban will resolutely crack down on Islamic State forces in the region and completely eradicate the proliferation of drugs.

Contributed by Datou from the Official Wechat account of Poquanle.