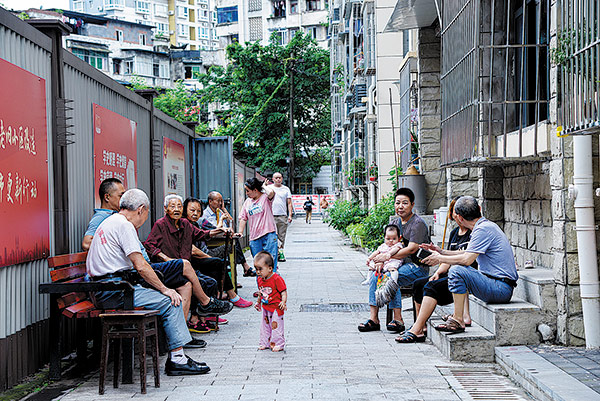 People of Xingjiaqiao community in Southwest China's Chongqing rest and mingle together outdoors by their residential buildings. [Photo/Xinhua]

Meticulously trimmed flowers and green plants can be seen in the seven-story residential buildings of Xingjiaqiao community, which is nestled amid new high-rise blocks and industrial edifices, and the surrounding streets are tidy and clean.

"We have no janitors or public attendants. We take care of our home by ourselves," says Huang Yantao, a resident of Xingjiaqiao community in the Liangjiang New Area, a State-level economic development zone in Southwest China's Chongqing municipality.

Huang, along with some 1,400 other residents of Xingjiaqiao, takes the initiative in every matter concerning the community, from where a new tree should be planted to who should receive a social relief payment.

However, things were wholly different before the renovation of the community. Tangles of bare wires crawled up walls or hung across streets. Calcimine on the walls of stairways could peel off at any time. Inside, conditions were unlivable, as domestic sewage escaped from aged pipes in both kitchens and bathrooms.

"I had to hold up an umbrella in the bathroom," says Huang. Back then, residents were cantankerous, always grumbling about the situation and demanding to be resettled through government support.

Xie Lan, head of the community workers and a resident of Xingjiaqiao, knew she had to help change the situation.

In 2017, the local government provided financial support to the renovation of the community. But Xie's excitement was quickly dampened by unexpected objections. Only 23 percent of residents agreed to the renovation plan. Many residents questioned the point of renovating such a dilapidated community.

Xie was not defeated. She and her colleagues visited residents, home by home. Built in the 1990s, the community was relatively new and did not qualify for government-supported demolition, she explained to them. She added that the buildings also had no potential dangers according to third-party evaluation reports and therefore could not be demolished.

Four households agreed to have their apartments renovated first, to show the changes to their fellow residents. When they saw the new, tidy and clean apartments, others changed their minds and accepted the renovation plan.

Xie recorded the personalized preferences of every household, including ceiling heights and the locations of electrical sockets, and discussed them with the contractors to try to meet the requests.

In early 2020, residents of Xingjiaqiao moved into their newly refurbished apartments. "I could not believe the light and clean kitchen and bathroom belonged to me," says Huang.

Xie won the trust and admiration of her fellow residents through the down-to-earth working style she exhibited during the renovation process. She also found an effective approach to improving community governance-sending community workers out to establish people's concerns, reporting the problems to the local government, and coordinating efforts to solve them.

But just as celebratory joy filled the community, the COVID-19 pandemic struck China and the world. Xingjiaqiao's community workers faced immediate challenges including screening for possible infections and locking down the entire community. These tasks were impossible for Xie's team of just 14 workers, so she posted a volunteer recruitment announcement in a WeChat group, unsure whether or not residents would come forward to help. Despite her worries, the group chat was flooded with responses. "I'm ready and will go all out," one message read.

"We trust her and are willing to contribute to safeguarding our homes," says Meng Jilun, a Xingjiaqiao resident.

Though COVID-19 is largely under control in China, the volunteer team continues to serve the community. Some address difficulties faced by senior residents and the vulnerable who are living alone. Some are dedicated to accompanying seniors and helping them deal with loneliness.

"I'm happy that our community is becoming more beautiful and harmonious, and that my fellow residents are more active in bettering our community," says Xie. 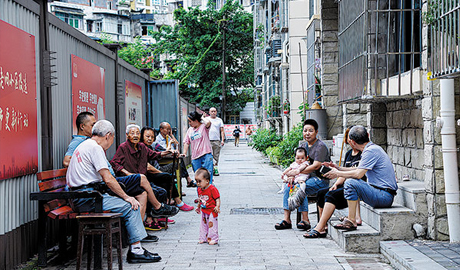