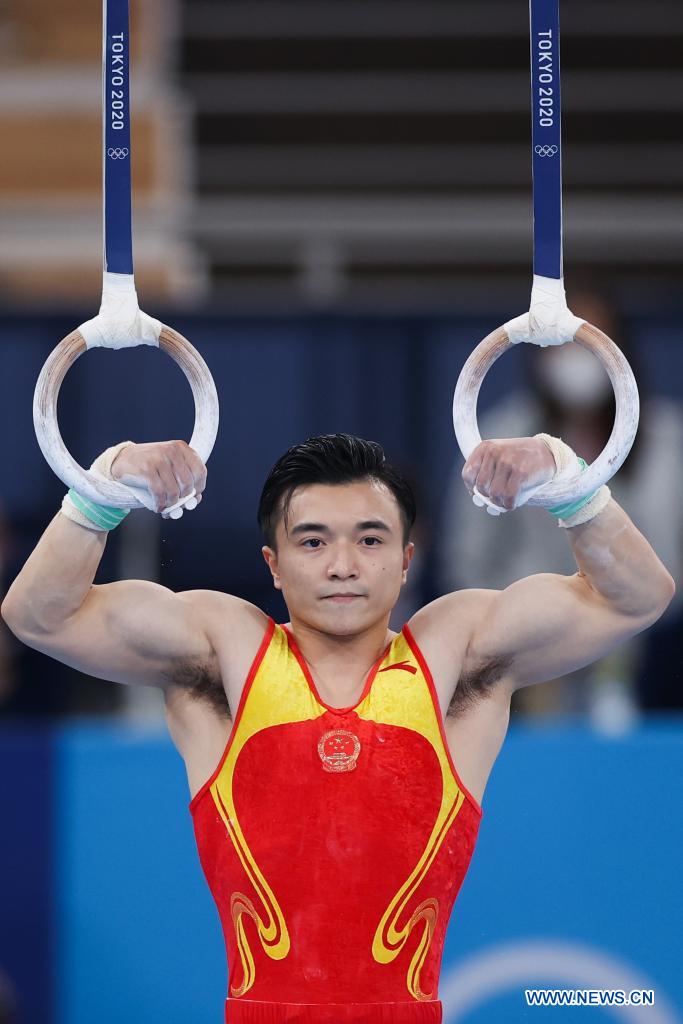 TOKYO, Aug. 2 (Xinhua) -- China's Liu Yang and You Hao claimed the gold and silver medals in the men's rings respectively on the second day of gymnastics individual finals at the Tokyo 2020 Olympic Games on Monday.

Liu scored 15.500 points to finish the top, ahead of You in 15.300 points. Greece's defending champion Eleftherios Petrounias was 0.100 further behind to take bronze.

Liu, 26, placed second to qualify for the final. With an unparalleled execution score of 9.000 points for his movements, he secured the first gymnastics gold for China at Tokyo.

"My goal was to become an Olympic champion since I was a child. I have trained for 20 years, and I was very eager to become a champion. There were times when I wanted to give up, and times when I didn't want to practice, and then there were injuries or other factors. But in the end I have carried out, and today came the satisfactory result," Liu said.

The 29-year-old You, who placed eighth to qualify for the final, is also satisfied with his performance.

"Although it's silver, I'm very satisfied," You said. "I have been performing my finals routine quite often and I am more familiar with it."

"I want to congratulate Liu Yang. This gold medal hasn't been easy for him. Before the competition, he had some problems with his knees in training. From the preliminary to the final, it was a very tough course for him," You said.

"We've been competing together since the 2013 World Cup. We've been fighting side by side for so long. We are both veterans. We are the oldest and we always share a room together. Today, we made this far together. I'm very happy," Liu said on competing with You in press conference.

Bronze medal winner Petrounias praised the Chinese players. "It was an extreme final and my competitors are great athletes. I admire them a lot," he said. "When I saw 15.5, I said to myself, 'OK, you have to do a perfect routine if you want to catch up the score'. I wasn't anxious because I was ready for it. That's the beauty of the sport, the fact that you can be at the same level."