Yes to “Vaccine Multilateralism”, No to "Vaccine Nationalism” 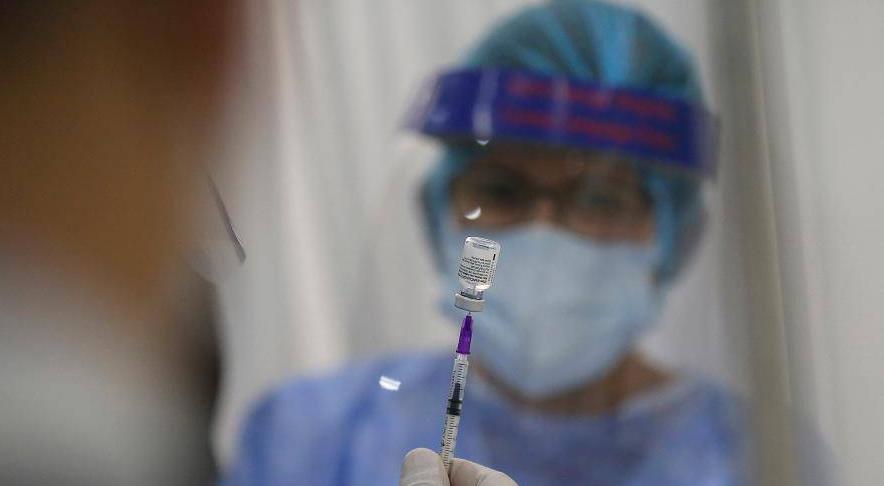 In May, President Xi Jinping announced five measures at the Global Health Summit to support the global campaign against COVID-19, including establishing an international forum on COVID-19 vaccine cooperation where countries, enterprises and stakeholders in vaccine production and development can discuss how to promote fair and reasonable global distribution of vaccines. This is an initiative that demonstrates the responsibility of China as a big country and its humanitarian concerns, which has received positive responses from the international community.

On August 5, the first meeting of the International Forum on COVID-19 Vaccine Cooperation was successfully held via videolink. President Xi delivered a written speech, emphasizing that China is willing to work together with the international community to advance the process of international vaccine cooperation and speed up the building of a community of common health for mankind. This forum is an important move to implement and promote the construction of such a community. It demonstrates China is a responsible major country that keeps its word.

Currently, the emergence of various mutant strains of the novel coronavirus has added more uncertainties to the global fight against the pandemic, while vaccines are a powerful tool. However, the serious imbalance in global vaccine distribution has greatly hindered this process. Relevant statistics show that the global inoculation rate is still insufficient, and 63% of countries and regions in the world only have a complete vaccination rate of less than 20%. It should be noted that in the face of this common challenge for mankind, instead of setting a positive example as a responsible country, some countries pursued "national priority" ,insisted on "vaccine nationalism" and even hoarded vaccines, which results in many developing countries having no access to vaccines. As the pandemic situation has not improved, social instability has increased significantly, and domestic economic recovery is hopeless, the global efforts to fight against this pandemic have been seriously undermined.

Faced with the pandemic, mankind shares the same destiny. However, the some countries' "vaccine nationalism" not only runs against the common destiny of mankind, but also disrupts efforts to contain the pandemic, as they only care about self-interest and ignore the safety and health of people in developing countries, especially the least developed countries.

Under such circumstances, it is very important to promote fair, affordable, timely, universal and reasonable distribution of vaccines around the world. As the global vaccine distribution gap continues to widen, the WHO issued the strongest appeal so far in August, asking richer countries to temporarily postpone the proposed booster injection. "We are in an urgent need to reverse the situation by offering most vaccines to low-income countries, instead of high-income countries," it stated.

While China has achieved significant results in the fight against the pandemic, it is actively promoting international unity, boosting economic recovery around the world. Chinese vaccines are doing China's part in the global campaign. At present, China has provided more than 770 million doses of COVID-19 vaccines to the international community, including donating vaccines to more than 100 countries and exporting vaccines to more than 60 countries. At the same time, China has carried out technology transfer and cooperative production with many developing countries, and has rapidly promoted mass production of vaccines, which has not only made contributions to the international fight against the pandemic, but also earned respect from the international community.

In his speech at the first meeting of the International Forum on COVID-19 Vaccine Cooperation, President Xi said: “China will continue to do its best to help developing countries cope with the pandemic. Throughout this year, China will strive to provide two billion doses of vaccines to the world. China has decided to donate $100 million to the 'COVAX Facility' for the distribution of vaccines to developing countries."These measures will help mitigate global vaccine production capacity insufficiency, uneven distribution and imbalanced vaccination, contributing COVID-19 vaccines through fair and reasonable distribution.

During the forum, China also issued the "Joint Statement of the International Forum on COVID-19 Vaccine Cooperation" with 22 countries, which conveyed the people's voice to the world. We need “vaccine multilateralism”, not "vaccine nationalism". We need to take new steps to inject new impetus into the solidarity and cooperation of developing countries and make new contributions to mankind's victory over the pandemic as soon as possible.

One is to reiterate the importance of the COVID-19 vaccines as a global public product. At this forum, the 23 countries called on all parties to continue their efforts to realize the availability and affordability of vaccines in developing countries, and to offer vaccines to developing countries, especially the least developed countries, as much as possible, underlining vaccine multilateralism and calling upon countries to enhance international cooperation mechanisms and collaboration, rejecting "vaccine nationalism", lifting export restrictions on relevant vaccines and raw materials. More and more countries are expected to join this team.

The second is to help make the global public health governance system more reasonable and perfect. The meeting expressed support for the WHO in promoting access to COVID-19 Tools (ACT) vaccine Accelerator and its “COVAX Facility”, and called on all parties to support the WTO in continuing to support COVID-19 vaccine intellectual property exemption, emphasizing the scientific nature and importance of the WHO emergency use list, and made contributions to accelerating the improvement of the public health safety governance system.

Third, it shows that the concept of the community of common health for mankind is more deeply rooted in people’s hearts. The pandemic has induced political, economic, security and other “complications”, which has become a common challenge for mankind. At this forum, 23 participating countries agreed that in order to win this precedent pandemic fight, we should uphold the concept of human health community, adhere to the principles of "people first" and "lives first", and unite to address the challenge.

If things in the world are beneficial to the people, we should enrich their roots and deepen their sources; for those harmful to the people, we should remove their roots and plug their sources. Since the outbreak of the pandemic, the global economy has been severely impacted, the international security situation has been turbulent, and people all over the world are suffering. At present, China is actively practicing multilateralism, continuously strengthening international cooperation against the pandemic. China has also provided vaccines to the rest of the world, especially developing countries, contributing Chinese strength to the global fight against the pandemic, working with people around the world to build a community of human health, so that people around the world will have abundant sources and deeper roots. However, some countries politicize and even label the pandemic, trying to manipulate it, ignoring the safety and health of people throughout the world. In this regard, people around the world will certainly uproot their roots and plug their sources.